Resilient, Yet Scarred Five Years After the BP Oil Spill, the Gulf’s Ecology Fights to Bounce Back 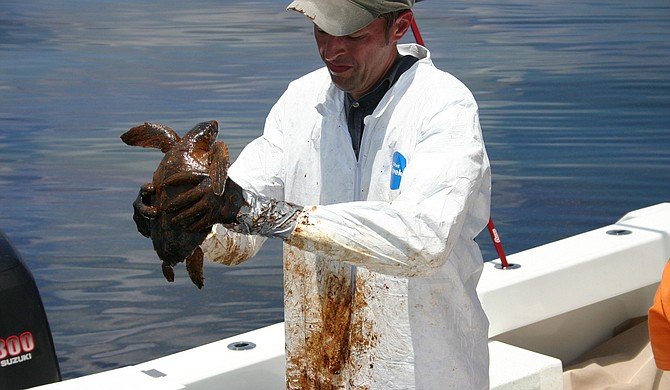 From above, five years after the BP well explosion, the Gulf of Mexico looks clean, green and whole again, and teeming with life—a testament to the resilience of nature.

But the aftermath of the Deepwater Horizon spill is about much more than shimmering blue and emerald water. And it's not as pretty a picture—nor is it as clear.

Federal data and numerous scientific studies show lingering problems. Splotches of oil still dot the seafloor, and wads of tarry petroleum-smelling material hide in pockets in the marshes of Barataria Bay. Dolphin deaths have more than tripled. Nests of endangered Kemp's Ridley sea turtles suddenly plummeted after the spill. Some fish have developed skin lesions along with oil in internal organs. Deep sea coral are hurting.

In some cases, the connection to the BP spill is solid; in others, it is harder to prove a direct causal link to the millions of gallons of oil spilled over 87 days in 2010.

"Look, we put nature on a treadmill and I think it did very, very well. We should consider ourselves lucky," said Chris Reddy of the Woods Hole Oceanographic Institute. But, he added, "It's the things that we don't see that have been a concern."

The surveyed scientists said that before the spill, the Gulf was a 73 on a 0 to 100 scale, on average. Now it's a 65. In the survey, scientists report the biggest drops in rating the current health of oysters, dolphins, sea turtles, marshes and the seafloor.   The AP also interviewed more than two dozen other scientists.

"The spill was—and continues to be — a disaster," said Oregon State marine sciences professor Jane Lubchenco, who was the head of the National Oceanic and Atmospheric Administration during the spill.

"The bottom line is that oil is nasty stuff. Yes, the Gulf is resilient, but it was hit pretty darn hard."

Lubchenco said some of her worst fears about dead zones or oil spreading farther didn't materialize. But, she added, "that's not to say there is no impact."

BP put out a 40-page report in March 2015, pronouncing the Gulf mostly recovered, noting that less than 2 percent of the water and seafloor sediment samples exceeded federal toxicity levels.

"Data collected thus far shows that the environmental catastrophe that so many feared, perhaps understandably at the time, did not come to pass, and the Gulf is recovering faster than expected," BP Senior Vice President and spokesman Geoff Morrell said in an email. "This is in large part due to the Gulf's resilience, natural processes and the effectiveness of response and clean-up efforts mounted by BP under the direction of the federal government."

In fact, there are experts who are surprised by how the Gulf has bounced back. Samantha Joye of the University of Georgia, who often paints a bleak picture of oil on the seafloor, recalled that in 2010 she dove in an area where the seafloor "was really hammered," with no animals of any sort around. Then, in 2014, she dove to the same place, and it was quite different.

"The fact that we saw living things on the bottom made me do a happy dance," Joye said. "The system is absolutely resilient. Thank God for that. The biggest question is: Is it going back to the same point before the spill, and that's what we don't know."

The federal government doesn't think the Gulf is back. At least not yet.

"Obviously, the Gulf is not as healthy as it was," NOAA Chief Scientist Richard Spinrad said. He ticks off how everything about the spill and its effects were large: the "massive kill-off" of coral, the dolphin deaths, the diseased fish and problems with oil on the seafloor.

There is no single, conclusive answer to how the Gulf of Mexico is doing, but many questions remain. Here are some of them:

What happened to dolphins?

Common bottlenose dolphins have been dying at a record rate in parts of the Gulf of Mexico since the BP spill, according to NOAA and other scientists who have published studies on the figures.

That's the longest and largest dolphin die-off ever recorded in the Gulf. But the number of deaths has started to decline, said Stephanie Venn-Watson, a veterinary epidemiologist at the Marine Mammal Foundation and a lead author of studies on the dolphin mortality. She said there was a brief unrelated die-off in a different area of the Gulf before the spill, but afterward the dolphin deaths jumped in a way that "matched that of the timing, location and magnitude of the oil spill."

In its report on the Gulf five years after the spill, BP said necropsies of dolphins and "other information reveal there is no evidence to conclude that the Deepwater Horizon accident had an adverse impact on bottlenose dolphin populations."

What happened to turtles?

The endangered Kemp's Ridley sea turtle used to look like a success story for biologists. It was in deep trouble and on the endangered list, but a series of actions, such as the use of turtle excluder devices, had the population soaring, and it was looking like the species soon would be upgraded to merely threatened, said Selina Saville Heppell, a professor at Oregon State University.

Then, after the spill, the number of nests dropped 40 percent in one year in 2010. "We had never seen a drop that dramatic in one year before," Heppell said.

Not enough data or research exists to blame the oil spill with scientific rigor, "but it's a remarkable coincidence, isn't it?" Heppell said.

BP said in its report: "The changing nesting trends could be due to many factors including natural variability and record cold temperatures."

What happened to fish?

Carcinogenic chemicals associated with oil appear to have gotten through the skin of these bottom-dwelling fish, he said.

"These bottom-feeding fish are still being impacted by the blowout," Joye said. "Their livers have fresh Macondo oil in them. Clearly, that's a persistent impact."

What happened to birds?

There have been at least two surveys of bird populations in Barataria Bay, the scene of the heaviest oiling and an important stopping place for numerous migratory bird species. Those surveys of shore birds and migratory birds found no obvious problems. But a recent study of native seaside sparrows in Barataria has found bird counts down. BP said "analysis and field observations conducted to date indicate any impacts on bird populations and nesting were limited and were followed by a strong recovery."

How are the marshes?

Oil hit about 620 miles of Louisiana's marshland. A lot of science has gone into studying the spill's effects on the marsh, in particular in the Barataria Bay area. And Barataria is not a pretty picture. Tar balls and mats are routinely found here. Fishing remains closed in parts of the bay.

An entire mangrove island, an important bird colony, has nearly disappeared under the water. Satellite imagery shows that about a foot of marsh has been eaten away along many shorelines here. Scientists have identified oil contamination in the plants and animals, and they are tracking its progression in fish, birds, mice, dolphins and insects.   BP said that, by 2014, "only 0.7 miles remained heavily oiled."

How are the beaches?

After an intense focus on cleaning up the Gulf's beaches, traces of the spill are hard to find along the sugar-white sands of Florida, Alabama and Mississippi. But large oil mats are resting in places, in particular at the extremities of south Louisiana. Waves are churning up the oil mats, which are becoming engrained with sand deposits in the fragile delta ecosystem already stressed by sea-level rise, hurricanes and a host of other man-made harms.

How much oil spilled?

The federal government used a team of scientists to calculate that about 172 million gallons spilled into the Gulf. That figure was peer-reviewed by outside scientists and confirmed by independent researchers, but BP put the number much lower, closer to 100 million gallons.

A federal judge in January essentially split the difference and ruled that almost 134 million gallons went into the Gulf.

Where did the oil go?

"It's not all gone," said former U.S. Geological Survey chief Marcia McNutt. Her team calculated that most of the oil evaporated, dissolved or dispersed. Separate respected teams peer-reviewed two studies in 2014 and 2015 finding that up to 10 million gallons of oil remains on the seafloor; one of the teams compared it to a bathtub ring.

"I saw it; I've got video of it," University of Georgia's Joye said. It's not liquid or a layer, she said, but splotches like the spatter from a paintball gun.

What don't we know?

NOAA Chief Scientist Spinrad said the government hopes to finish its five-year assessment on the health of the Gulf by the end of the year, so it is too early to make any real conclusions. Some problems may show up later. It was not until 10 years after 1989's Exxon Valdez spill that scientists noticed a dramatic crash in the vital herring population.