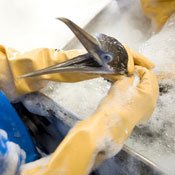 Oil can cause harm to wildlife in several ways, including, ingestion, inhalation, physical contact and absorption, according to the U.S. Fish & Wildlife Service. Also, as technicians apply dispersant chemicals to the water's surface, the oil will fall through the water and settle into the sediments, which can affect turtles, whales, dolphins, shellfish and fish.

Birds: Birds become exposed to oil when they skim the water's surface searching for fish to eat. If a bird comes in contact with oil, it may lose its ability to fly, dive for food or hover on the water. An oiled bird that attempts to groom itself may ingest the oil, which can kill the bird instantly or affect its internal organs, leading to death. Some of the most important migratory bird ways in the U.S. are along the Gulf coast, and now is the peak of spring migration. Birds nesting in the gulf area that can be affected include the piping plover and the already threatened Brown Pelican.

Fish/Shellfish: Fish may be harmed if they ingest oil through their gills or if they eat contaminated plankton. Oil contamination can affect a fish's eggs, leading to reproduction and population problems. Crabs, lobsters, clams and oysters can also be affected. Bottom dwelling species are susceptible to damage as the oil becomes concentrated on the shore.

Long-term effects: In 2008, commercial fishermen on the Gulf Coast caught more than 1.27 million pounds of fish and shellfish, according to the National Oceanic and Atmospheric Administration. On average, the seafood industry supplies the Coast economy with $2.4 billion in revenue. Long-term effects on birds and marine mammals are less known; however, immune-system problems are likely as well as more limited reproduction, which can heavily affect long-term populations.

Oil has the potential to stay in the environment for decades; ecologists have detected oil sediment up to 30 years after a spill, reports the U.S. Fish & Wildlife Service.