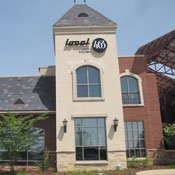 David Blumenthal and Derek Emerson are surprisingly relaxed for two guys who just opened Madison's most popular new restaurant. Sitting in a space that can be used for private dining in Local 463, Blumenthal and Emerson are dressed down in T-shirts and shorts, making jokes and speaking optimistically about their new business venture, while their wait staff bustles around in the background preparing for lunch service.

Emerson, 40, is the chef and co-owner of Walker's Drive-In in Fondren with his wife Jennifer. They have joined longtime friend Blumenthal, 43, to do something a bit more whimsical than Emerson's upscale Walker's offerings and to bring his culinary creations to a new audience.

The three owners hope to reach what they believe is an untapped market in Madison. While many dining choices in Madison are fast food or corporate chains, Local 463 hopes to offer a unique alternative.

"We wanted to bring some sense of ownership for the people of the area, so that they know they have a place that is owned by people that live here and want to be a part of that community," Blumenthal explains.

The restaurant's moniker comes from the partner's desire to have a local element in the name and it's proximity to Highway 463. Besides giving the restaurant a local feel, they are keeping the cuisine southern inspired, with Mississippi produce sources, and protein and diary products from farms in Alabama.

The food, which Blumenthal describes as playful dishes with good portions, offers the quality Walker's is famous for with additional family-friendly options and prices, allowing guests to choose from a range of items.

Loyal Walker's fans will be happy to know Emerson has brought along a few of his bestsellers, including tamales and Redfish Anna, which they're calling Redfish 463.

"I think if I came to Madison without that Redfish Anna, I would have been shot," Emerson says.

While the owners like that the customers can make the culinary connection to Walker's, they want to stress that Local 463 isn't Walker's II. "I want people to be able to come to Walker's one day and come here the next and feel like they got two completely different experiences. We can't reproduce Walker's. I think people that have been going to Walker's for years understand that, and they would be angry that I tried," Emerson says.

Local 463 is located at 121A Colony Crossing in Madison, and is open for lunch seven days a week and dinner every night except Sunday. Call 601-707-7684 for information.