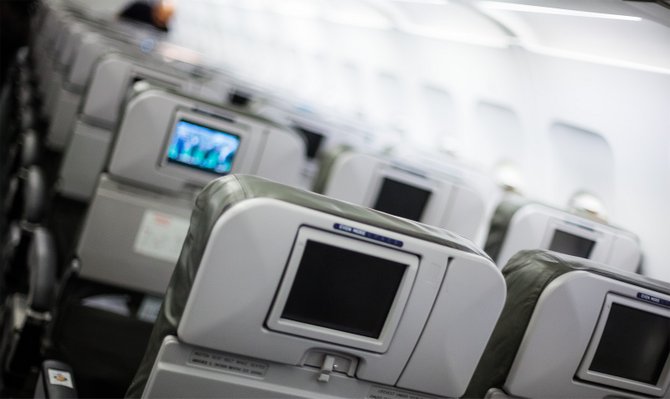 Spending about 100 hours each month in the air, flight attendants are bombarded with pesticides, radiation, ozone and any illnesses passengers carry on board. Photo by Courtesy Flickr/angeloangelo

Spending about 100 hours each month in the air, flight attendants are bombarded with pesticides, radiation, ozone and any illnesses passengers carry on board. Now new research shows that they also fly along with some of the highest levels ever measured for some flame retardants.

All 19 commercial airliners in a new study had several flame retardants in their dust. And one chemical was measured at concentrations more than 100 times higher in the airplane dust than in dust collected from homes and offices.

Heather Stapleton, an environmental chemist at Duke University and co-author of the new study, said they were "some of the highest measurements I've ever seen," which "suggests that exposure levels could be higher than one normally experiences in a car or the home environment."

Whether flight attendants, pilots and cleaning crews face any health risks from the chemicals is unknown. But researchers worry that long hours breathing recycled cabin air could have some effects, particularly in pregnant women.

"The additional exposure to the common passenger, occurring during travels, will be minimal. A question of concern is rather personnel in airplanes," said Ake Bergman, an environmental chemist at Stockholm University who has studied flame retardants on airliners.

Despite the sky-high levels of flame retardants in cabin air, a small study of flight attendants and pilots suggests they don't seem to have higher levels in their bodies than the general public. However, scientists say the most prevalent flame retardant on airplanes is difficult to measure in people's bodies.

Airplanes are full of combustible materials, and a mid-flight fire could be catastrophic, so the Federal Aviation Administration requires airplanes to pass strict fire-safety tests. Items on planes likely to contain brominated flame retardants include seats, carpets, walls, overhead bins and pillows, according to the new study's x-ray fluorescence tests. Carpets contained the highest levels of bromine in the study.

Under fire in recent years, flame retardants have been building up in human bodies, including breast milk, around the world, and there is mounting evidence linking them to potential health effects, including reduced IQs, attention problems and other neurological effects in children exposed in the womb or during infancy.

Chemical companies say that flame retardants are safe and that they are necessary to protect people from fires on airplanes. An August, 2005 crash of a passenger jet in Toronto, in which all 309 people aboard survived, is a prime example of how flame retardants can help keep people safe, said Bryan Goodman, spokesperson for the American Chemistry Council, an industry group.

"This new study, which does not report on any adverse health effects from the chemistries detected, should not make us lose sight of the fact that flame retardants can provide an important layer of protection to travelers, and, like all chemicals, they are subject to review by governmental bodies in the U.S. and around the world," Goodman said.

Victoria Day, a spokesperson for Airlines for America, an industry group, said flame retardants "are essential" for safety and to comply with "strict FAA safety regulations."

"To maintain high air quality in aircraft cabins, today's jets have highly effective filters that are designed to remove virtually all particles, including dust, from the cabin air," Day said.

But some research suggests that flame retardants may not actually slow the spread of fires and may increase emissions of carbon monoxide and hydrogen cyanide, two poisonous gases.

"Fire is a significant concern when you're 10,000 feet in the air, but I think it boils down to the question of how effective are these chemicals at retarding fire?" Stapleton said. "The data I've seen recently for use in furniture has not convinced me that they would actually provide significant escape time."

Airliners manufactured by Boeing, Airbus, Canadair Regional, McDonnell Douglas and Embraer were analyzed for flame retardants in the study by scientists from Harvard University, Duke and two other institutions. Dust was vacuumed from the carpet and air return grilles on the wall near the floor of airplanes manufactured between 1986 and 2008.

Concentrations of DecaBDE, a brominated flame retardant known as Deca that is used mostly for electronics, wire and cable insulation and textiles, were "orders of magnitude higher than what is typically found in U.S. homes and offices," the researchers wrote. For example, the average level in airplane dust was 495,000 parts per billion, while in home dust it was 4,500 and in office dust, 4,200.

Deca is being phased out by the end of this year in the United States. Little is known about what, if any, health risk it poses to humans. However, animal studies have linked Deca to damage to the liver, thyroid, reproductive system and developing brain. Based on animal studies, it is classified as a possible human carcinogen by the U.S. Environmental Protection Agency.

After a cross-country flight, the hands of nine flight attendants and one passenger contained high levels of Deca compared to the general public.

A newer flame retardant, HBCD, also was found in airplanes at higher levels than in U.S. homes. Others were found at similar concentrations as homes.

One veteran flight attendant said that she and her colleagues are concerned that they are exposed to many contaminants and other health threats on airplanes. "Of course I'm concerned. I just don't know what to do other than to quit," said the flight attendant, who has worked for a major airline for several decades. She asked that her name be withheld. "We get exposed to a lot of stuff...You're sitting in recycled air." On long flights, "by the end of the day that air is really used up."

Research in airplanes is relatively new. The first study to show that concentrations of brominated flame retardants (PBDEs) in dust from airplanes are higher than in homes was published in 2008. More recent studies have supported that finding, showing that PBDEs in cabin air during a flight are higher than in U.S. and U.K. homes and similar to levels found in industrial environments.

Despite the high levels on aircraft, the amount of Deca and other PBDEs in the bodies of airline workers is about the same as the general public. A 2010 study did not find higher average levels of PBDEs in the blood of 30 Dallas-based flight attendants and pilots compared to the U.S. general public, though some individuals did have high levels.

"We found no evidence whatsoever of actual intake into the body above background level," said Arnold Schecter, an environmental epidemiologist at the University of Texas Health Sciences Center in Houston. He said there could be some instances of elevated levels "in pilots, flight attendants, other workers inside of airplanes or even people flying in airplanes,however, it seems to us based on our research to be extremely remote."

But the scientists who conducted the new study aren't convinced so they are now following up their aircraft study with tests of flight attendants. Results are expected later this year.

"Several flight attendants in [Schecter's] study did have elevated serum concentrations...The weight of evidence certainly suggests that we need to continue to examine this," said Joseph Allen, a Harvard School of Public Health research associate and lead author of the study.

Complicating matters, Deca, the most prevalent flame retardant on airplanes, is very difficult to detect in the body, Stapleton said. The amount that gets into the bloodstream is small, so the chemical can escape detection. Also, Deca is bulky so dust coated with it might not pass through the lungs to the bloodstream. If it does pass into blood, it doesn't stay there long, so unless a person is tested soon after a flight, researchers might miss spikes in concentrations.

Although no one knows if flame retardants or other chemicals play a role, flight attendants are more likely to have cancer and miscarriages than the general public.

They also have a 62 percent higher risk of miscarriage and stillbirth than the general public, according to 2010 study, which says these risks "have been poorly studied in a limited number of investigations." The Association of Professional Flight Attendants says that their flight attendants are allowed to fly during the first 28 weeks of pregnancy.

The triggers of these health problems are still under investigation, and researchers are studying a number of possible culprits, such as radiation.