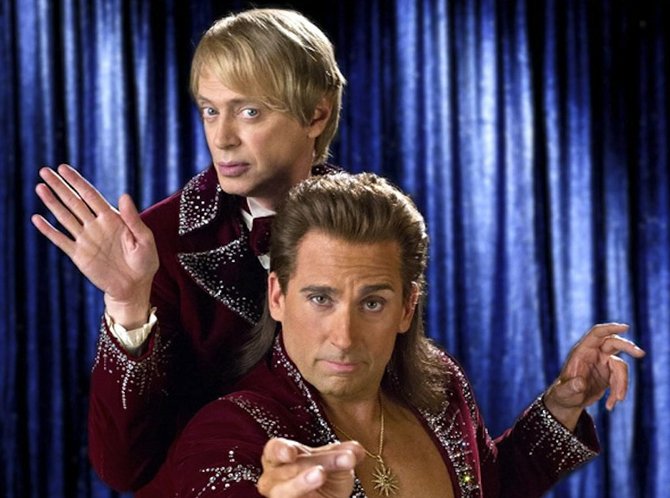 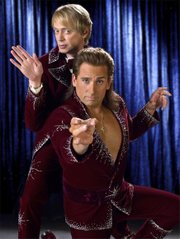 "The Incredible Burt Wonderstone" ignites a tiny spark of wonderment. But it's like watching a Boy Scout trying to light his first fire with dry twigs.

This film needs a match to ignite the screen and save the spark. The cast--led by Steve Carell and complemented by Steve Buscemi, Jim Carrey, Olivia Wilde, James Gandolfini, Alan Arkin, Jay Mohr, and Brad Garrett--do everything in their mighty comedic powers to start an inferno of laughs. But a conventional script, written by Jonathan Goldstein and John Francis Daley, snuffs out their creative sparks. The bits never get beyond a random puff of smoke.

Dan Scardino (a seasoned television director with bunches of "30 Rock" credits) directed the movie, which starts with a pixie-cute boy (Mason Cook) running from a gang of suburban bullies. He eats tree bark to show them that there is nothing they can make him do that he didn't think of first.

When he gets home, he finds a note and a present. His mother apologizes, but she has to work another double shift and can't be home for Little Burt's birthday. She didn't have time to bake a cake, but she provides Little Burt instructions for the mix.

You get the picture. Little Burt has a most miserable childhood. But Burt's birthday present, carefully wrapped by mom, makes up for all of the day's shortcomings. It's a super spectacular Rance Holloway magic kit. "Everyone loves a magician," Holloway (Arkin) says in the introductory video. Burt's eyes light up.

The only kid Burt impresses with his new tricks is a pasty weakling named Anton (Luke Vanek). Burt and Anton make an odd couple, but they work misfit-well together and become superstar magicians ruling the Las Vegas strip.

As the music crescendos, Burt Wonderstone (Carell) and Anton Marvelton (Buscemi) fly in on gimmicky cable wires. Burt's an orange-tanned, mullet-sporting sex maniac in a velvet ensemble of Elvis vintage. Anton is a bug-eyed, blonde-streaked back-up man. He's the brains, and Burt's the beauty. And their act is hysterically bad.

But like all great magicians who have reached the pinnacle of success, there is only one way left to go: down. And Burt and Anton crash hard, finding themselves out-dazzled by street magician Steve Gray (Carey). Their friendship breaks apart.

I won't spoil the what-happens-next for those who want a surprise. It's all too predictable, but there is one little morsel of truth that almost--but not quite--redeems the senseless smoke-and-mirror tricks that pass for plot points. Burt loses his best friend and job because of complacency. The secret to being a great magician (indeed, to life itself) is to connect with and touch people in new ways, endeavoring always to keep reinventing oneself and giving back to the audience.

Carell, with his wholesome boyish charm, connects with us. We can relate to Burt's downfall. He forgot what was important. It takes a children's birthday party for Burt to find his way back, to mend lost friendships and to pursue magnificent dreams again. As Guy Laliberte, co-founder and CEO of Cirque du Soleil, has written, "From a tiny spark, a great fire was kindled, and its flames warmed the world."

This film never ignites into a burning flame, but it does have a tiny spark.