No Love for the Wizard | Jackson Free Press | Jackson, MS

No Love for the Wizard 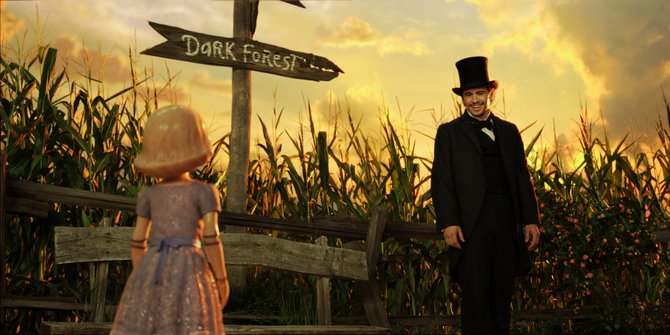 James Franco is on his way to the magical kingdom in “Oz the Great and Powerful.” Photo by Courtesy Disney

Who is the man behind the curtain, pulling the strings and reprimanding Dorothy and her buddies?

The voice belonged to the so-called "great" and "powerful" Wizard of Oz. In movie circles, the wizard is a charlatan, fake, fraud and liar. Without spoiling the ending of a 74-year-old classic, a few clicks of ruby slippers and Dorothy would have been back in tornado-torn Kansas. But thanks to the sumabitch wizard, she had to risk life and limb to death-melt the wicked witch.

So I ask the elephant-in-the-room question. Why make a movie about a not great and not powerful man? I think some MBA types must have hatched a plan to adapt the George Lucas prequel playbook to one of the most beloved movies of all time. Strip out Dorothy singing, dump a bunch of money into a super-sized, jumbo-normous green screen, snag a great director like Sam Raimi and throw in a lot of good-looking actors with misfit toys, and you have created "Oz the Great and Powerful."

Somehow, someone--maybe a lot of somebodies--believed that the wizard of fabrication had enough oomph to compete with a somewhere-over-the-rainbow farm girl and her little feisty dog.

Screenwriters Mitchell Kapner and David Lindsay-Abaire front load the story with the life of Oscar Diggs (James Franco) before Oz. Oscar--shortened to Oz because two-syllable names are so hard to pronounce--leaches the innocence from pretty country girls. He treats his beleaguered assistant with disdain, and he generally messes things up with his pride and selfishness. When the muscle man smashes down his door, he escapes in a hot air balloon. And then things spin out of control. Oz gets twisted, hurled and cleaned up in the eye of a tornado. He lands on the shores of Oz, where the beautiful witch Theodora (Mila Kunis) welcomes him, and little creatures nip at his heels.

Theodora's sisters--Evanora (Rachel Weisz) and banished Glinda (Michelle Williams)--have their own quality time with Oz. He's quite the witch's man with his awe-shucks-I'm-in-Oz grin. But like Dorothy after him, Oz has a quest. He must free the people of the pestilent Wicked Witch of the West. But which of three witches is the wicked one? I won't tell.

If--and that's a big if--a prequel should have been made about the "The Wizard of Oz," then the story should have focused on the witches, who have lots of anger, built-in drama and reality-show hair-grabbing potential. Somewhere before the acres of sleep-forever poppies, the seeds of a witches' prequel were sown in the "Wizard of Oz." When Glinda first meets Dorothy, she asks, "Are you a good witch, or a bad witch?" You see, everything in Oz is based on what kind of witch you are.

No one give a flying pig's curly tail about the wizard. The witches sell the story.

In the book "Wicked: the Life and Times of the Wicked Witch of the West," Gregory Maguire tells a phenomenal tale of the much-aligned, green-skinned, pointy-chinned, broom-flying witch in a prequelian story to the "Wizard of Oz."

Some critics have complained about James Franco. But he's perfect in the role-- Snidley Whiplash sinister with a smile that cracks his face apart. You can't fake that; that's honest-to-goodness method acting. The real issue is that Franco plays the man behind the curtain, and we don't really care about the non-great wizard after the "Wizard of Oz."

This film says nothing beyond confectionary beauty. And it almost gets a pass. Some scenes are so wildly imaginative and eye-poppingly colorful that you can almost forgive the movie's fun-ride emptiness. But then it starts to grate on the nerves, like the music for "It's a Small World." But let's think rainbows, not rides. "Somewhere over the rainbow, skies are blue. And the dreams that you dare to dream, really do come true."

Don't go looking for your dreams to come true in "Oz the Great and Powerful." They won't.