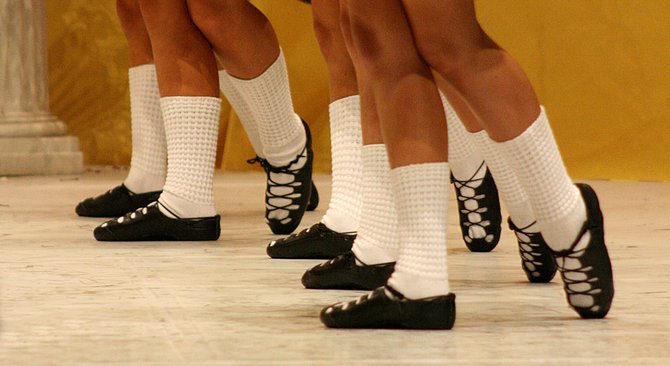 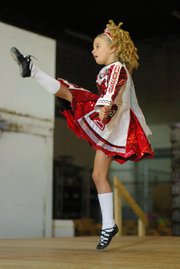 Irish Ceili dancing has a rich history as a dance form that connects people across the globe.

You've mostly likely seen Irish dancing in movies and TV, if not in real life. Remember when Jack takes Rose down to the third-class deck to have a good time in the movie "Titanic?" They leave the stuffy atmosphere of the upper class and go below deck to hear robust, lively music and to dance a jig. Or, think of the celebration at the beginning "The Fellowship of the Ring." (Hobbits have a strikingly similar culture to the Irish). And, of course, let's not forget Michael Flatley, the Irish American dancer and choreographer of "Riverdance" and "Lord of the Dance."

When it comes to Irish dance, Margaret Cupples, president and co-founder of the Jackson Irish Dancers. likes to say, "It's the only aerobic exercise you can do while drinking a beer." Dancing and beer often go hand-in-hand at the Irish ceili (pronounced KAY-lee), which is Gaelic for "gathering," although Cupples says over the years the word has transformed to mean a "gathering with dancing and music."

Irish ceili dancing has a rich history with no clear origins, but it's a traditional dance that has survived the ages. Few accounts of it exist in early literature, but the dancing was popular enough that it spread to England from Ireland in the 1500s. In a 1569 letter to Queen Elizabeth I, Sir Henry Sydney describes dancers he saw in Galway: "They are very beautiful, magnificently dressed and first- class dancers."

But then, a major bummer: The English introduced the Penal Laws, which made dancing an activity to repress--for more than 100 years. Ceili dancing survived, practiced in secret until those laws were no longer recognized.

Enter the Irish Dance Master. In the 1800s, towns and provinces had someone to teach ceili dances to the young and the old alike. The point was to teach new people how to dance in a way that could refine the skills of the seasoned dancers. That way, everyone could dance together. Thus, a "gathering" became a "gathering with dancing and music." The masters were an important way to teach the dances--the Haymaker's Jig, the Rinnce Fada and the Trenchmore--to a new generation of people.

The traditional ceili dance has many forms--maybe you've been to CelticFest at the Mississippi Agriculture & Forestry Museum and seen one version of the ceili. Those dances are simple compared to the difficult solo dances (such as those in "Riverdance"). Set dances involve partners, and some even have music where you change partners--from which line  dancing evolved.

The Jackson Irish Dancers, which Cupples and others formed in 1998, teach classes and perform at events throughout the metro area. "We're not a competitive group," she says. "It's an old-fashioned good time."

As part of Jackson's big St. Patrick's weekend, this Sunday at Fenian's Irish Pub, the dancers will hold a ceili with a special surprise. Emerald Accent, an Irish band from Laurel, will perform music for the event.

"The dancing and the music are designed to go together," Cupples says. "That's what makes it unique." People all over the world can know the same dances set to the same type of upbeat, energetic music. Cupples says the Jackson Irish Dancers once hosted a man from southwestern Ireland. He knew a particular dance that his family had been dancing for years and years in his small town. It turns out that the Jackson Irish Dancers knew the dance, the Ballyvourney Reel Set. They were in New Orleans years ago and learned it from a nun. As fate would have it, she just happened to be from the same small town in Ireland. Cupples says the man cried joyfully because he had come all the way to Mississippi from a small town in Ireland and the people here knew his family's dance.

The Jackson Irish Dancers hold free "mostly monthly" ceilis at Fenian's Pub, usually the third Sunday of the month. Cupples says it's a "great place to meet new people. You can dance or you can sit and watch. It's  a family event."

There's an Irish proverb that goes something like this: "Your feet will bring you where your heart is." Bring your feet to Fenian's Pub on Sunday  and dance.

The Jackson Irish Dancers will hold the next ceili at Fenian's Pub (901 E. Fortification St., 601-948-0055) Sunday, March 17, from 2 p.m. to 4 p.m. Admission is free. The group teaches classes by appointment, $10 each, plus $25 for a family or $15 for an individual registering for the year. Visit jacksonirishdancers.org for more information.

Traditional Irish music is a collaborative art form that welcomes audience participation, so the next time you attend a ceili or listen to Irish performers, feel free to join in by "playing the boot," or tapping and stomping your feet along with the music.