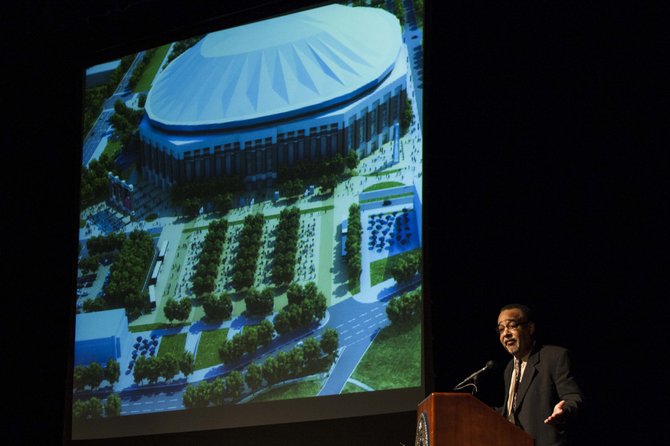 Jackson State University is aiming for a lofty peak, hoping to fill what some see as a real need in the capital city with its plan to build a $200-million domed stadium on campus.

David Hoard, JSU vice president of institutional advancement, said the university will attempt to fund most of the 50,000-seat dome with public funds, including $30 million to $60 million in new market tax credits and $40 million to $50 million in amusement tax. JSU hoped to get as much as $75 million in general-obligation bonds from the state Legislature, but a House bill that would have provided the funds died last week.

"Many of the stadiums at state institutions over the past 50, 60 years have utilized state money," Hoard said. "It's not just a stadium for Jackson State. We see it as an investment for the city, the county and the region. The economic impact will be dramatic."

The announcement comes on the heels of a city-ordered study for a new arena in Jackson. With that study, Washington, D.C.-based Brailsford and Dunlavey suggested that the city build a $115-million, 12,000-seat arena near Farish Street. The engineering and management firm suggested the arena with the intent to host sporting events, concerts and ice shows.

That study was the result of several years of talks. Downtown Jackson Partners first began the conversation in 2008. The Jackson Chamber of Commerce took the lead on raising money for a study for a few months in 2010, before passing the lead over to the city, which hired Brailsford and Dunlavey to conduct the study.

Mayor Harvey Johnson Jr. said at a city council meeting in January that the city will not be able to fund such a project any time soon, but that the information could be useful to Jackson State in its stadium endeavors.

Hoard said JSU plans to use the stadium for more than the Tigers' football and basketball games, including many of the same events that Brailsford and Dunlavey suggested: major concerts and professional sporting events.

"We're in communications with the (New Orleans) Saints, (Atlanta) Falcons and the (Tennessee) Titans to come here for exhibition games," Hoard said. He also mentioned the possibility of NBA games held in the dome stadium.

The arena study found that a modern indoor facility with seating of 12,000 or more could draw a large number of major concerts that pass by Jackson on their way to cities like Memphis, New Orleans and Atlanta.

University Vice President of Business and Finance Michael Thomas said JSU sporting events in the dome will only take place a few dozen days out of the year, but that with all the other activities included, the stadium could be in use about 200 days per year.

There is still a hope that JSU could get some help from the Mississippi Legislature. The House passed a general obligation bonds bill for projects on college and university campuses, and legislators could still choose to add JSU's stadium to that bill.   Hoard said JSU isn't down and out if that doesn't happen, though.

"There are about 13 or 14 various streams that add up to about $320 million, so we have options in case something doesn't work out," Hoard said.

Events such as concerts and NFL exhibition games, along with JSU's plans for enrollment growth, constitute a need for such a large stadium.

JSU hasn't shown a need for a 50,000-seat football stadium in several years, though. Support for the athletics program has dropped in recent years, despite success on the field. JSU averaged a home crowd of just 14,461 fans in four games at Veterans Memorial Stadium in 2012. That was down from an average of 23,166 in 2011. Over the two-year span, the largest reported crowd at a JSU home game was 38,722 at a matchup with Arkansas Pine Bluff Oct. 8, 2011.

The other major difference in the expansion at Ole Miss is that the school is not asking for public funds; they're using all private money for the projects.

A recent USA Today report on university athletic revenues shows Jackson State may not be capable of raising much in the way of private donations for the stadium.

In 2011, the most recent year the data is available, JSU's athletics program reported $6.9 million in revenues, and the exact same amount in expenditures. In other words, the JSU sports program, like the majority of NCAA programs, does not make a profit.

Ole Miss is in the process of raising funds for the Forward Together project, which includes a major football stadium expansion and a new on-campus basketball arena. The school has estimated the total cost of the project at $150 million, and is offering priority seating and luxury-box incentives, as well as naming opportunities to boost donations, much like JSU. Unlike JSU, however, Ole Miss is not asking for public dollars.

After 18 months of fundraising, the Forward Together project has raised $77.5 million. About $60 million came in the first six months, and donations have dropped to just more than $17 million over the past year. More than $15 million of the raised funds have come in the form of direct gifts.

Thomas said the timeline for completion is still unclear, but JSU hopes to get the stadium built as quickly as possible. Without major public help, that may not be any time soon. Jackson State, a school with about $42 million less than Ole Miss in annual athletic revenue, cannot currently afford to build a $200 million stadium on its own.

Apart from wanting a stadium on campus, JSU is feeling pressure to get out of the university's current football home, Veterans Memorial Stadium. That stadium, first opened in 1950, sits in the middle of the strip of land along Woodrow Wilson Avenue that several groups hope to transform into the health-care corridor.

The corridor would include a vast collection of medical and other health-rsselated services, retailers and manufacturers stretching from Interstate 55 to Interstate 220. The plans include using the land where Veterans Memorial Stadium sits to build medical-related businesses and hospital expansions.

Under state law, when JSU begins playing home football games in another venue, management and ownership of Veterans Memorial will transfer to University of Mississippi Medical Center.

JSU football coach Rick Comegy said the stadium could give the Tigers a big recruiting edge in the SWAC.

"Young people today enjoy nice facilities," Comegy said. "I think (the dome) is going to make a great impact on our program when kids come up and visit and see the modern stadium and the technology that, hopefully, will be in there.

Construction plans also include a parking lot for tailgating close to the stadium, Thomas said. JSU is exploring the possibility of an adjoining parking garage.

As a PROUD alumnus - this is what I want to see! Don't give me excuses, aim high and put in work and get it done!

JSU doesn't need a dome that hold 50,000 people. Even if they did reach 15k-16k students they still won't. None of the Div I schools that have home field domes hold that most fans and except Syracuse U. and Texas-San Antonio U. Syracuse's dome was built in 1980 when they had good football teams and the Alamo Dome was built that large to attract a NFL but they never have and Jackson sure never will.

So why does a school that only has 9000 students and only averages around 12k fans need with a domed stadium that holds 50k fans? Total waste of money.

Duan, I'm a JSU Alum also. However, aiming high is fine but it also has to be within reach. That isn't a small-minded comment, that's reality. At some point, aiming high was to be coupled with reality and money. I submit to you and others that aiming high would be funding a plan that illustrates the cost to improve and upgrade Memorial Stadium to include all of the amenities that are wanted and needed. Aiming high would be funding that plan with a Capital Campaign by the Alumni and University supporters. Considering this has never been done, wouldn't that be 'aiming high'?

Knowledge06 - I understand where you are coming from I really do - but we are going to have to agree, to disagree.

An outdoor stadium in a city of our size is just not conducive for multiple events –its really dead weight on our economy. Because you have a big ole structure that only get’s so much use a few times out of the year.

I love Memorial Stadium and the history we have in it – but it’s not beneficial to the University or the City if it’s only getting used 8 to 12 times out of the year.

Knowledge06 – America is growing, and especially in the south! Cities like Cleveland and Detroit are losing people on a daily basis, like Mississippi and Alabama did during the 50’s – Atlanta, Birmingham, Charlotte, Memphis are building facilities on the grand scale – because they understand the R.O.I is great.

I feel your passion for the old stadium – but we see it differently on this one and I have to stand my ground on this one. I was a naysayer of the new president’s visions for the school at first – but all this little woman does is produce! She said we need $10 million by a certain date, it gets done! Hell, I’m officially on her bandwagon – she’s blazing a trail and not looking behind at the dust! Yes indeed!

Duan - I'm a numbers guy and I have some for you:

The cities you mentioned are #9 (Atlanta metro area), #33 (Charlotte metro area), #41 (Memphis metro area) and #50 (Birmingham metro area) in the rankings of the largest metro areas in the U.S. Jackson, MS is #95. You are comparing apples and oranges. If you want to compare apples to apples, let's talk about Huntsville (#119), Mobile (#126) and Shreveport (#129). Let's compare to those areas because the Jackson metro population is closer to those cities than those you mentioned earlier. Now....Huntsville only has the football stadium for Alabama A&M which was built in 1996 with a capacity of 21,000. Mobile has a football stadium that is older (originally built in 1948) than Memorial Stadium and only has a seating capacity of 33,000 but has been upgraded and renovated and hosts the Godaddy.com bowl AND the Senior Bowl each year. In addition, they hold other events in the stadium during the year. Shreveport has a football stadium that was built in the 1930's and has been upgraded and renovated to seat 59,000 (which is less than Memorial Stadium) and hosts various football games and events as well as the ANNUAL Independence Bowl.

I say all of this to say that with improvements and upgrades to Memorial Stadium, JSU could actually compete with some of these cities for the bowls that they have OR present a proposal for an ANNUAL bowl classic in Jackson, MS. Further, those upgrades and improvements would almost guarantee an opportunity to host an NFL pre-season game each year. We are not in the league with the cities YOU mentioned because we don't have the population base. For that reason we have to recognize where we are and appreciate what we have and the opportunities it presents.