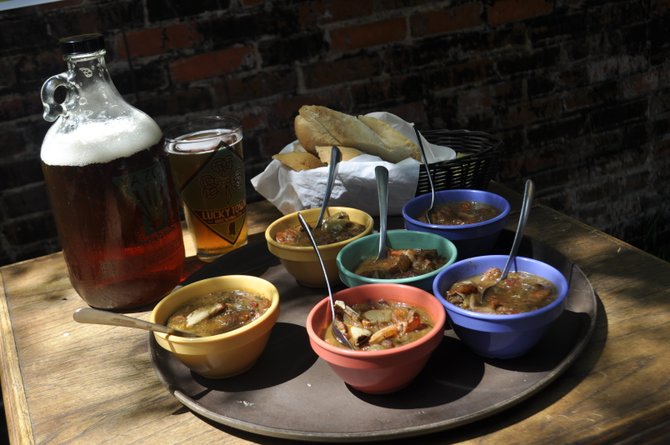 Local music promoter Arden Barnett and event producer Bill Bissell are teaming up to bring back the International Gumbo Festival after a decade-long hiatus. Photo by Trip Burns

Local music promoter Arden Barnett and event producer Bill Bissell are teaming up to bring back the International Gumbo Festival after a decade-long hiatus.

Barnett and Bissell announced the event Tuesday, June 25, alongside Mississippi Director of Tourism Malcolm White on the patio of White's restaurant, Hal and Mal's. The festival date is set for Sept. 28.

"We're proud to announce the return of the International Gumbo Festival," Barnett said. "We are looking forward to bringing back one of Jackson's favorite events, right here, downtown at Smith Park."

The event will feature a gumbo cook off, which begins at 7 a.m. and ends just before lunchtime; the gates open at 11 a.m.

Beer will be available for purchase, and Barnett said they are working with the city on acquiring a liquor license for the event, so they can serve margaritas and other libations.

"We have to give kudos to the city for giving us an exemption on the alcohol," Barnett said. "They have been great to work with so far, and it's really going to help us put on a great event, right here in the heart of the city."

BankPlus, Polks Meats, Howard Wilson Capital City Beverage and Clearchannel radio stations have signed on to sponsor the event. All proceeds go to the Harold T. and Hal White Memorial Scholarship Fund, which funds one scholarship each year in the Hinds Community College hospitality management program. It is named for Hal and Mal's owner Malcolm White's late father and brother.

"I'm really glad to see this festival come back to Jackson," White said. "We used to have a lot of fun with it, and I'm sure with Arden and Bill in charge, it's going to be a first-class event."

White recalled the last year they held the event, which he used to promote. His brother Hal and he set out to cook the biggest pot of gumbo on record. They even checked with the folks at the Guinness Book of World Records, but he can't recall whether they got there or not.

"With Hal manning this huge crawfish-cooking contraption, we cooked the biggest pot of gumbo any of us had ever even heard of," White said. "I don't know whether we got the record or not, but we had so much gumbo left over, we couldn't find enough people to give it all away."

The Gumbo Fest was the most relaxed event of the year - just a bunch of folks hanging around in Smith Park enjoying the music. I well remember the tons of gumbo Hal made that day. People were coming by the restaurant with buckets so they could take some home. Thanks to Arden & Bill for resurrecting this event. Ya'll even got Southern Halo to play!

Alright, some good news! Malcolm, bring back Bill Wharton and the Ingredients to the Gumbo Fest.