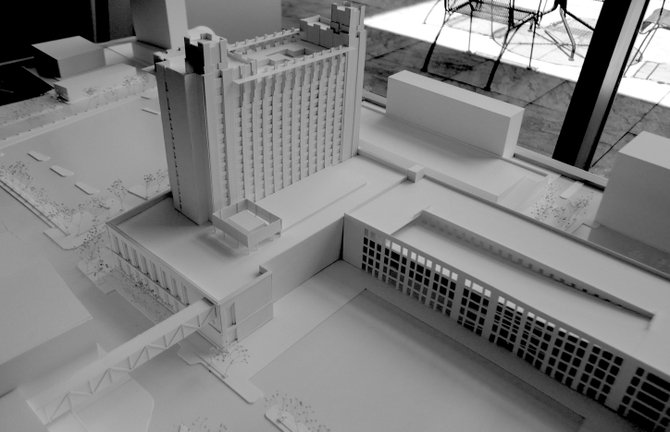 Lame-duck periods in politics are usually just that—lame. That apparently does not extend to Jackson.

Outgoing Mayor Harvey Johnson Jr. is working in front and behind the scenes to wrap up loose ends before he leaves office in a week. On June 25, at a joint press conference with Mayor-elect Chokwe Lumumba, he announced that the city has reached an agreement for the low-awaited convention center hotel.

Jackson Convention Hotel LLC., operated by father-and-son team Robinson and Andre Callen, will develop a $60 million, 305-room hotel across the street from the Jackson Convention Complex and connected to it via a skywalk. The developers are working in conjunction with Hyatt Hotels to build a first-rate establishment with meeting areas, a full-service restaurant and parking.

The city will be on the hook for $9 million in loans once the building is constructed, but that money can only be used to cover budget shortfalls for the first five years of operation. After that period, Hyatt has agreed to pay back any money it has borrowed, in full. The Jackson Redevelopment Authority was set to vote on approval of the plan June 26.

Lumumba voiced his support for the plan at the Tuesday press conference.

“We still have to do our own vetting,” Lumumba said. “To the extent that we have, the company seems to be a viable one, and the deal looks promising. We have to make sure the numbers are right in terms of what we’re going to get out of this versus what we have to give up; $9 million is a lot less than we thought it was going to be, but it is still $9 million. We have to make sure in the excitement that we don’t get carried away.”

Later Tuesday, Johnson put at least one controversial agenda item before the Jackson City Council that will have effects after he leaves office. The first was the appointment of local businessman Patrick Harkins to the Jackson Public School Board, representing Ward 7, for a five-year term.

Lumumba, who still represents Ward 2 until July 1 as its council member, was not present at the council’s work session Monday, but showed concern last week when Harkins was first mentioned as a possible candidate for the school board.

The mayor-elect has been busy as well. Last week, Lumumba introduced his Transition Executive Committee.

“The citizens of Jackson deserve a seamless transition as well as a transparent government,” Lumumba said in a release. “I have selected a group reflective of the make-up of the city of Jackson that is diverse. The diversity is represented in the gender, age, professional skill-sets, community involvement and yes, race.”

The 10-member group is made up of four women and six men; two are white and eight black. Lumumba said he chose the group carefully, and pointed out that the makeup of his team closely resembles the actual makeup of Jackson’s population.

Lumumba announced his team on the same day Jackson Police Chief Rebecca Coleman announced she would retire after four years at the helm of the Jackson Police Department and nearly four decades of public service.

Well it's about time. I hope it happens.

This will be a great addition to Jackson's downtown. I am truly impressed and feel that this will spark greater development of all types. Now that we have a new hotel going up it would be great to see some downtown condos and town homes!!

From what I can see, this looks like a solid project and should bring business to the convention center and to Jackson in general. I hope it can go forward without further delay. This does appear to be a great improvement over the TCI proposal and the Hyatt brand is a solid choice.

The $9 million from the city is just to protect any losses the company takes in the first three years. $16 million is the total amount of the project. The city isn't putting up money for bricks and mortar, outside of, I would imagine, some tax incentives and the land.