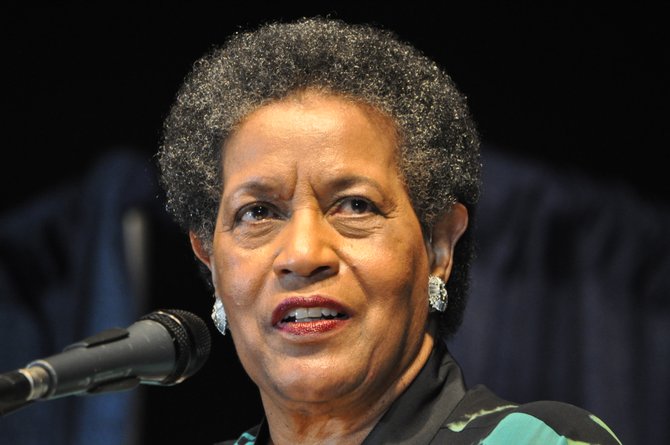 Fifty years after the assassination of Medgar Evers, Mississippi Gov. Phil Bryant and civil-rights leader Jesse Jackson came together to celebrate Evers' life. If there was any doubt about the impact of his message of coexistence and social harmony, it was dispelled last night.

The Alcorn State University male ensemble performed the Negro National Anthem to kick off the production before Evers-Williams gave the official welcome.

"I'm happy to see all of you here 50 years after Medgar's assassination," Evers-Williams said. "... He left us with memories, left us with courage, and he left us with the determination to continue the fight that he had started here in Mississippi. I'm so happy that we have so many in the audience that contributed to that struggle. We'll continue to work as Medgar worked, for the benefit of all. He knew what he was doing, he knew what the chances were (that) he would not survive. He does not in the physical, but his spirit survives and lives, and has led us toward the future."

Outgoing Jackson Mayor Harvey Johnson Jr. spoke next, and welcomed the audience—some of whom had traveled from as far away as Washington D.C., New York and California to attend—to the gala.

"Although we have come a long way in terms of civil rights, there's still much work to be done," Johnson said. "Events like this one and others we've experienced this past week help to inspire our young people to continue the journey that Medgar started. ... Some of us, many people, have not considered the rugged path African Americans have had to travel in pursuit of economic, social and political empowerment. That is a journey that African Americans must continue, even today."

The presentation continued late into the evening. Highlights included performances by soul singer William Bell, gospel recording artist Tamela Mann and, of course, B.B. King, who closed out the night.

The Medgar and Myrlie Evers Foundation also gave one of its four inaugural Evers Justice Awards to Jordan, who, among other achievements, successfully sued the University of Georgia and forced the school to admit its first two black students in 1961. Jordan survived an assassination attempt in 1981. Other honorees were civil-rights activist Fannie Lou Hamer (posthumously), King and Clarion-Ledger investigative reporter Jerry Mitchell, who helped convince authorities to reopen cold cases from the civil-rights era.

Jordan also made a special presentation of a donation of $150,000 to the Medgar and Myrlie Evers Foundation.

Although recognized, special guests Jesse Jackson and the city of Jackson Mayor-elect Chokwe Lumumba did not speak at the event. Lumumba did, however, take a few minutes to comment from the red carpet.

"I'm very inspired by what Medgar did, and he helped to create a launching pad for what we are about to do in the city of Jackson," Lumumba said.

"The fact that so many of us are here today, and from so many different communities, is a tribute to what he was trying to achieve. He was trying to integrate restaurants and get some people to vote, and now we have all these people here, from all different walks, celebrating his life. It's a tremendous tribute to his resilience. He was in a place where he was lonely, in many instances and, I'm sure, often afraid. He lost his life, but only after he had already given it to the movement."

I attended the gala last night. I almost didn't come because I was tired and my feet hurt in my heels BUT a friend had graciously given me a ticket at his table so I decided to attend. Growing up in Alabama, I knew of Medgar Evers and his courage. I had grown up with the pictures of the beating, lynchings, bombings in the south. It was painful then and when I allow myself to think about it, it is painful, now. My father died young because of the stress of being a Black man in this country. He worked hard, tried to raise his family with dignity and respect and fought every day to keep his job. He was threated with losing his job unless he stopped me and my sister from demonstrating and sitting in at churches. Once while doing voter registration in Macon County, Alabama, a car load of white men with rifles followed my brother and I to a deserted road, pulled in behind us and lined up in front of our car. They held their rifles as though they were going to shoot. I decided then, that IF I had to die that day, it would not be as a coward begging for my life but as a Black Woman, standing tall with the pride of a people in my heart. I told my younger brother to change seats with me so that I could drive. I got out of the car and walked around to the driver's side. I stood in front of these six WHITE men and told them that I was turning my car around and driving back home. They stood there looking like "What do we do next" while I turned the car around and drove home. What they didn't see, was my foot on the gas pedal pressed to the floor. My dad's old car would only go about 35 miles per hour. It was one of MANY, MANY days that I will never forget. Medgar Evers is a man we should NEVER forget. Unfortunately we seem only to remember when there is a BIG gala and we can be seen. IF this were not true, Medgar Evers Blvd. and MLK drive would NOT look as they do. They would look as though they were LOVED and CARED FOR. They would look as though the people they died for had PRIDE IN THEM and the courage they displayed. WE CAN AND WILL DO BETTER!!!

One final thought that night as Mr. Watkins sang and the screen lit up with images of the PEOPLE of Mississippi who fought and died for the end to discrimination and racism. I thought of the new mayor-elect, Mr Lumumba. He was one of the courageous ones who walked with Medgar and founght the same fight with the same ideals for human rights and human dignity. I'm proud to have supported you and will work with you to make Megar proud.

@ Sarahmina: "I thought of the new mayor-elect, Mr. Lumumba. He was one of the courgeous ones who walked with Medgar and fought the same fight with the same ideals for human rights and humn dignity."

Medgar Evers was killed 50 years ago. At the time, Mayor - Elect, Mr. Lumumba would have been around 15years old and living in Detroit, MIchigan with his mother and other siblings. I am not trying to take anything away from him; however, we must be very careful in our reporting of historical events that can be proved as wrong or inaccurate.

Point well taken, EXCEPT, It wasnt meant to be taken literally but figuratively. What I was TRYING to convey was the sameness in ideas and struggle. Hope that clears it up for you!