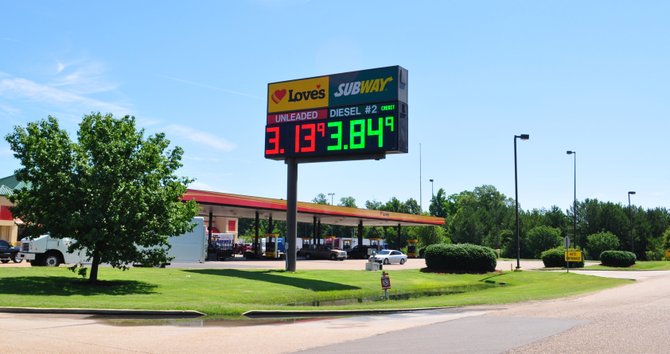 Petroleum speculators attribute Mississippi's below-average gas prices, like the ones found at Love's Truck Stop on Hwy. 80 in Pearl, to stabile production from refineries. Photo by Trip Burns

The price of oil is up, year-to-date, around the country, but somehow Mississippi keeps beating the heat of rising gas prices.

Gasbuddy.com Senior Petroleum Analyst Gregg Laskoski attributed the reliably low prices in Mississippi to stability in production in the region, and predicted good prices throughout the summer, barring natural disasters.

"The price of gasoline in Mississippi and the southeast in general is indicative of stable pricing and a pretty steady fuel supply," Laskoski said when reached by phone Monday morning. "... The one thing we really have to look for is production stability. It's not terribly surprising to see these low prices in the southeast. The prices in the month of June have stayed low over the past two or three years.

"I'm predicting, by the 4th of July, that prices will be even lower than they are now."

"It's the one thing that remains a wild card," Laskoski said of the forecast. "If that forecast is accurate, we would see rising prices every time one of the refineries in Texas, Louisiana or Mississippi has to shut down because of safety concerns. It's not like turning off the lights and leaving, it takes days to prepare and days, and sometimes longer, to get the plants working again."

Mississippi has four oil refineries, located in Lumberton, Pascagoula, Vicksburg and Sandersville, and one biodiesel refinery in Greenville.

The other aspect of the equation that could affect the price of gasoline is the value of crude oil, which spiked to nearly $150 a barrel in 2008 when the national average for gasoline hit an all-time-high of $4.11. That price has since stabilized. Now it's trending downward, with prices between $96 and $104 a barrel.

Some online services, such as JacksonGasPrices.com and Laskoski's organization, Gasbuddy.com, are designed to help drivers find the cheapest gas in their area. On both of those sites, users post prices they see along with the time and date. The site then lists the gas stations by location and gas price.

The cheapest price for regular gas reported in metro area Monday morning was $3.09 a gallon at the Blue Sky Station at Interstate 55 and Siwell Road in Byram. The cheapest gas in Jackson was $3.11 a gallon at the Super 7 on the corner of Bullard and Boling streets.

Gluckstadt resident Dan Wills was filling up his Nissan Murano for $3.29 a gallon at the Chevron station at the corner of Old Canton Road and Lakeland Drive in Fondren Monday morning. He said he doesn't think about the price on a daily basis, but he certainly sees the difference in his bottom line at the end of the month.

"I help manage a business that uses 15 vehicles that run on diesel," Wills said. "The lower prices definitely make a difference there."

One industry that really feels the financial crunch at the pump is the taxi companies, who are not allowed to adjust their rates based on fuel costs. In Jackson, the city council raised the rate cabs can charge customers last year.

Jackson Taxi manager Jessica Knight has been driving since 2009. She said the price of gas has a big impact on how much money the company makes, or in some cases, doesn't make.

"When the city council went up from $2 to $3 last year, it was like we got a raise, if that's what you want to call it," Knight said. "By law, we can't adjust our rates when the gas jumps up in the summer time. I'm sure it's going to go up again this summer, because it always does."