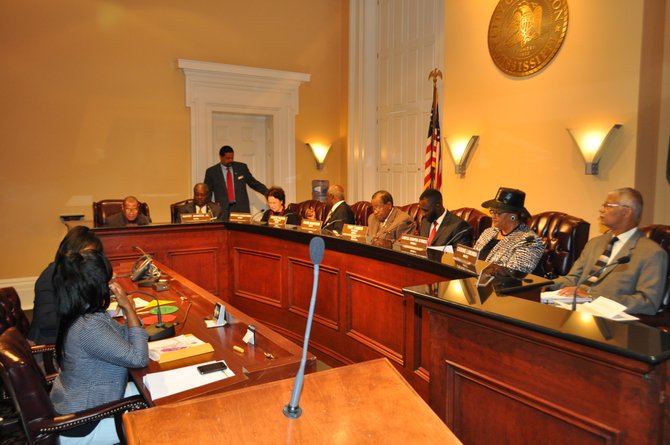 The Jackson City Council had a busy night May 28. In the absence of Ward 1 Councilman Quentin Whitwell, the council voted unanimously to hire an election consultant, to provide funds to Stewpot Community Services, and to accept a bid for a construction contract that should bring several city bus stops and sidewalks into compliance with the federal Americans with Disabilities Act.

Madison-based Pharos Consulting Services, a project management company that provides voter-registration systems and voting-machine initiatives, according to the company's web site, will be the city's election consultant. Pharos consultant Madalan Lennep has worked in the information technology field with high-tech companies including IBM, Wang and Data General. The city paid Lennep $1,050 for work during the election.

City Clerk Brenda Pree said a consultant was necessary because the city handled its own election after a year of redistricting without the help of Hinds County, which conducted the 2009 municipal elections.

"Madalan Lennep works in the Secretary of State's office, and she provided us with technical support and made sure ... that all the information was entered into the system correctly," Pree said. "We had to make sure all of our 'I's were dotted and 'T's were crossed, because we had to be sure we were in compliance with all the election laws."

The council agreed to donate $40,000 to Stewpot Community Services, which provides shelter, meals and other services to Jacksonians in need. Stewpot CEO Frank Spencer said that donation makes up a quarter of the operating budget for the program's Opportunity Center, a day shelter that helps Jackson's homeless people find work. An anonymous donor, Stewpot and the Ruby E. Morgan Foundation will match the city's donation.

Stewpot funds the rest of its operation through federal emergency-shelter grants. That operation includes a community center on that houses Stewpot's teen program and a computer lab; the Central Urban Ministry Center with its community kitchen, food pantry, clothing closet, community health clinic, legal clinic and chapel; and Matt's House, which provides emergency shelter for up to 30 homeless women and children at any given time. The city also donated $20,000 to the Partnership to End Homelessness, a non-profit that helps Stewpot.

The council agreed to award a $167,000 contract for ADA-related construction at seven bus stops to Garrett Enterprises Consolidated Inc. Socrates Garrett, the company's owner, is a Jackson developer who also owns the Mississippi Link newspaper. Garrett out-bid five other companies for the contract.

The sidewalk and bus-stop improvements bring Jackson closer to complying with a 2009 consent decree from the U.S. Department of Justice, which followed a lawsuit against JATRAN, the city's public-transportation system. That lawsuit argued that the city wasn't in compliance with the American with Disabilities Act, and the decree singled out 21 city bus stops.

In March, the city council voted 3-1 (with members Frank Bluntson, Charles Tillman and LaRita Cooper-Stokes absent) to approve $10 million in bonds to repave major thoroughfares, with at least $1 million allocated to each of the city's seven wards. At the time, Councilman Lumumba, the lone vote in opposition, accused the mayor of election-year pandering.

During his State of the City speech May 29, Johnson mentioned that the council was delaying issuance of the bonds.

"It is my hope that this issue will move forward, because this money could make a major impact right away all across Jackson," he said.

On May 30, Ward 5 Councilman Charles Tillman told the Jackson Free Press that the council decided April 1 to table the bond issue until after the elections.

"The mayor has said from his own mouth that this is not the way to go." Tillman said.

"... If we went ahead with the bonds, it would take 10 months to a year to get the money back, (and) then bid out the contracts. The people need relief now. These roads are bad, and people are having to spend all kinds of money to fix their cars."

Tillman added that the council didn't rule out issuing the bonds, but would take another look under a new administration.

"I've known Councilman Lumumba just from being around the city," Stamps said. "Our relationship came about because of our mutual passion for the city."

Stamps said he's anticipating the July 1 inauguration ceremony so that he and Priester can get started in their new roles.

"People are calling it a youth movement, and I don't liken it to that because we are both grown men," Stamps said. "The group that is in there now has withstood many blows and done a lot of things that have helped Jackson. It's just time for the next generation to stand up and get into office and do some things that will really make Jackson proud."