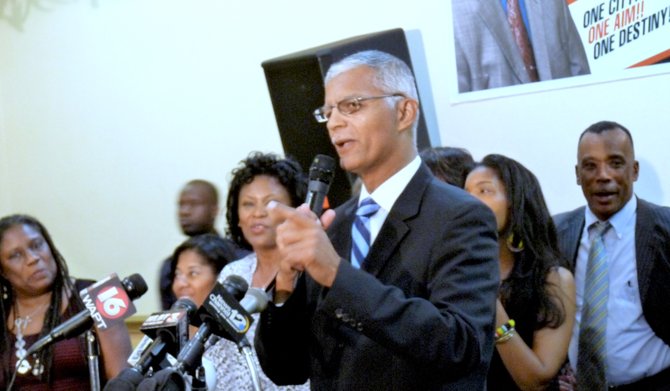 The atmosphere in the Clarion Hotel's ballroom was electric moments before Chokwe Lumumba arrived on the scene to celebrate his election victory Tuesday. Lumumba was officially Jackson's next mayor. Photo by Tyler Cleveland

The atmosphere in the Clarion Hotel's ballroom was electric moments before Chokwe Lumumba arrived on the scene to celebrate his election victory Tuesday. Lumumba was officially Jackson's next mayor.

This wasn't just an acceptance speech; it was a party. A quartet of conga drum players outside the hotel welcomed around 250 supporters. Inside, where attendees availed themselves to the cash bar and buffet, the Southern Komfort Brass Band was jamming. Recording artist McAfee performed the old Sam Cooke classic "A Change is Going To Come," and Rev. Jeffery Stallworth gave an invocation.

When Lumumba arrived around 9:30 p.m., he and his family entered the room second-lining to the tune of "Do Whatcha Wanna."

After the music died, the chant started: "The people united will never be defeated!"

Throughout his speech, Lumumba struck a chord of unity as well as racial and social inclusion. He used basketball metaphors to describe Jackson as a team that "must work together to perform well," and said the team still has plenty of room for everyone.

Lumumba thanked his family, his campaign workers and his ancestors for working hard to get him to where he is today. Regina Quinn and Lumumba's son, Chokwe Antar Lumumba, both spoke, throwing support behind the mayor-elect and praising Jackson for making the right choice.

"My father has hard a hard time because he often cares too much," his son said. "How often has that been the problem? That we have someone who cares too much? That's a problem Jackson needs to have."

I am simply elated at the POSSIBILITIES!! The past ends today and a new present and future begins. We have the opportunity to be GREAT - to exceed all expectations. It is simply a matter of "WILL"!! That is not to say that the road to this kind of success will be easy, change never is. It is, however, to say that it is POSSIBLE, given the will of the PEOPLE under the leadership of a "JUST" visionary. Is Chokwe Lumumba a man with all of the answers? Is he a man who can work miracles or can change the trajectory over night. ABSOLUTELY NOT!!! He is a man who with our help can begin to bend the negativity in a more positive direction. The operative word is "WE". "WE THE PEOPLE" of Jackson and the surrounding communities. Throughout history there have been moments of GREATNESS. I think this is one but it is left up to "US" to be ready for the challenge.

I worked in Mr Lumumba's campaign and I want to personally thank the amazing people who were in the office EVERY day lending their support and expertise to the June 4th "VICTORY". I am so thankful and blessed to have met you and to have made such lastin and honored friendships.

@sarahmina "The past ends today and a new present and future begins. We have the opportunity to be GREAT - to exceed all expectations."

Please do not think that my query to you is encouraged by the fact that Mayor Jonson lost his race to be re-elected; however, I am concerned that you would make a statement that our "past ends". Before you start on a totally new direction for the "new present and future future" of our City to begin, may I suggest, if you were not present, to read Mayor Johnson's State of the City Address. Ms. Ladd published the entire Address here in the JFP.

It is my sincere hope that Mr. Lumumba will not end the many accomplishment and projects initiated by Mayor Johnson, but, that his Administration will build on them.

My fear is for the Legacy of a man who gave so much and who was able to bring Jackson back after it had been "run in the ground", will be trashed. If you and this incoming Administration are really about "UNIFICATION", may I suggest that you cease and desist from your idea of forgetting about the past. For too often and too long, we as Black folks have forgotten the bridges that brough us over and in many cases, we make sure that the good ones are burned. We have so many herons and heroes who have been dropped from our "Oral History Books".

We must tell the truth about those who make outstanding contributions. Who will remember if WE forget.

I offer my best to you and the Lumumba Administration. Mayor Johnson is leaving this City with many, many positives. May I suggest that your focus will not be on "bending the negativity", but, with focusing on the positives. Always remember that we build on our STRENGTHS; Not our Weaknesses.