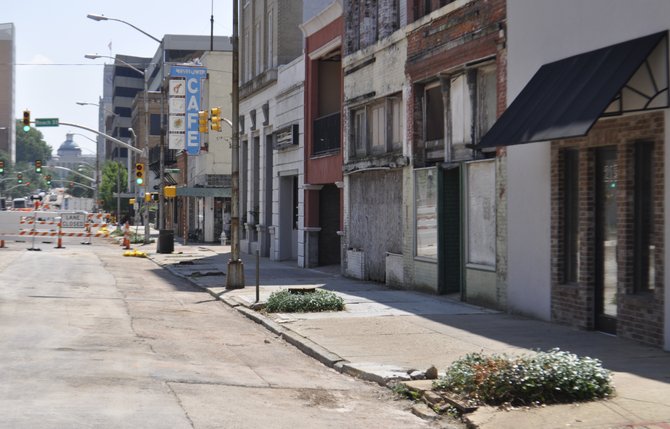 Drivers and pedestrians on Capitol Street are in for some headaches in the coming weeks due to construction, but they will also notice a change in the scenery. Photo by Trip Burns

Drivers and pedestrians on Capitol Street are in for some headaches in the coming weeks due to construction, but they will also notice a change in the scenery.

Gone are the trees that used to accent both sides of the street, and the process of two-waying the one-way street is ongoing. Looking east from West Street, pedestrians can now see the sign for the Mayflower Cafe from blocks away.

The motivation behind the two-waying of Capitol Street is simple - if you slow down traffic around the once-thriving business district, the foot-traffic will increase and drivers will be more likely to stop and shop.

The idea to overhaul downtown's centrally-located, east-to-west corridor has been a pet project of Downtown Jackson Partners for years. In 2010, DJP President Ben Allen wrote that "Retail does not enjoy one-way streets with cars whisking by."

There's little doubt that something must be done to help the once-thriving business district, which has seen some improvement since the re-opening of the King Edward Hotel, but not enough to attract more business. But critics say the ongoing $10 million renovation, which includes adding four roundabouts, a bike path and giving the street a landscaping makeover, likely won't have the desired effect.

Mayor Chokwe Lumumba on Thursday explained why his support for the project has been "non-existent or lukewarm."

"The idea behind it is that it will improve retail opportunities because it will slow down traffic," Lumumba said. "I'm not sure that it is going to do that. (The project) is already established, and I'm the executive of the city, so I'm going to see it through to completion. We have to hope the people who had more confidence in the project when it was approved are right."

The $10 million makeover, in the works since 2008, began on the heels of the Mississippi Department of Transportation's announcement that it will delay road construction around the state to concentrate on the upkeep of the 27,000 lane miles, some as old as 25 years, that are breaking down.

A task force of lawmakers, business leaders and others created by the state senate found that MDOT was spending around $150 million to keep up the roads, which cost about $400 million to maintain properly.

Lumumba needs to worry about the crime rate and car jacking's and let the urban planners/economic developers do their job. The renovation of this street is long overdue and downtown Jackson needs a place that will prompt businesses to move in. The slower car traffic and increased foot traffic will surely equate to an increase in revenue for the already established businesses and the ones that will move in. The Downtown Jackson Partners are trying to make Jackson, MS a destination that is worthy of showing off. Starting in the middle of downtown is the best place to start and will hopefully have a "ripple" affect to the other streets.

"If we do not start somewhere, we will get no where."

It will do no good if the panhandlers and others confront the people on foot. Then, there is the very real perception of crime based on actual criminal activity. No one wants to be confronted and/or potentially accosted!

Development works in city despite poor people who ask others for money. The key will be what is in those storefronts that people want to stop for, other than warehoused empty spaces.

And the roundabouts sound ugly. Too bad about that.

We didn't say above that two-waking of Capitol also project of previous mayor, not just DJP.

It is no more the mayor's job to fight crime than focus on urban planning. He presides over department heads in charge of myriad areas.

Besides, by the time crime happens, it's too late to stop it. Then it's about catching the criminals, which JPD has long been good at--better than national average. Sadly, not enough citizens have the will to do what it takes to prevent crime.

I must say I'm not sure the reasoning behind converting Capitol St. to a 2 way is sound, seeing as how, after dark anyway, downtown is essentially a ghost town. I'm pretty sure businesses aren't avoiding downtown because of one way streets.

Maybe it would be wise for the Mayor to implement a "Panhandeling Ban." These bans have been used in Orlando, Florida and Atlanta, Georgia and have been slowly making way in other cities. Some of the "bans" allow for panhandeling only 1 day a week, which is usually on Sunday. Extreme times call for extreme measures and Jackson needs to find ways to bring the money back down to Jackson.

Slowing traffic down won't in itself increase retail trade. Parking will still be a problem. Run a trolley up and down Capitol Street, without fare, so that people can step on and off up and down the whole street without walking from one end at State down to the King Edward and train station.

Whenever someone suggests a ban on the poor asking for money, I can never resist thinking: "What would Jesus think?"

The ban's are in place to protect the shoppers/tourists/businesses from being harassed by panhandlers that could escalate to criminal action. I can see both sides of the argument, but Jackson is in dire need of a solution that will make people feel safe downtown.

I think we read that verse differently.

The Capitol Street project began in 2006 with discussions initiated by Downtown Jackson Partners. In 2007, the project gained momentum when Parkway Properties, the Greater Jackson Chamber Partnership and Downtown Jackson Partners formed a partnership to bring the project to fruition during the Melton administration. Returning Capitol Street to two-way traffic was singled out as a catalytic project in the Capital City Strategy in 2004. The downtown study was commissioned by the City of Jackson and partly funded by DJP.

The project consisted of converting Capitol Street to two-way traffic from State Street to where Capitol and Amite intersect. New traffic signals, decorative lighting, rebuilding sidewalks and making them larger, repaving the road, internalizing the ramps of the garage on Capitol Street, new trees, increasing street parking and various placemaking concepts were included in the proposal.

From 2008-2010, our group raised over $8.5 million in federal and state funding with the understanding the City of Jackson would match part of federal funds. The City's match totaled a little over $700,000.

The project was then turned over to the Johnson administration, and the design and scope of the project changed to what it is today.

If anyone has additional question or wants additional information for a follow up story, please contact me at 601-353-9800 or [email protected].

Thanks John Gomez for the work that you are doing to make Jackson a destination.

"The project was then turned over to the Johnson administration, and the design and scope of the project changed to what it is today."

It is so sad that Former Mayor Johnson could not continue his work with the group in seeing this project to completion and eventual fruition. This thought comes in the light of our present Mayor's "luke-warm" interest and his stated concern that he does not have the faith in the project that Johnson had.

I'm sure that the City's match would have totaled the requested match; however, we must all recall and remember the state of the City during that period of post Melton Financial Distruction.

Congratulations and my wish for continued success of the John Gomez Downtown Jackson Partners! $8.5 million represents a lot of hard work and well thoughout efforts.

I have never felt "harassed" by "panhandlers" - If I say that I'm sorry, but I have no cash (I truly seldom carry cash with me anywhere), I have been told "God bless you," and/or "Have a blessed day." Does that sound like harassment? If I have $2, I share that with him/her. I used to carry McD coupons with me when there was still a McD's downtown. A handshake and a smile are welcomed. I have never felt as if I was in danger in downtown Jackson at any hour. My comment to people who ask me "aren't you afraid?" when I tell them I live in Jackson is: "Of what?" (I can hear people coming out of the woodwork who will be posting that I'm the reason there are panhandlers - for giving someone a dollar...)

Same here, Dorothy. I've seen much more rudeness in people responding to "panhandlers" than from them in Jackson and beyond. Most of the time, treat them with respect and they return it: Golden Rule stuff.

And I've personally been harassed far more by cowards sitting behind computer screens using fake names to spew hate and lies. And I find that folks on cell phones and texting while driving near big-box retail to be far more dangerous than poor folks asking for change downtown.

Amen! Except not just near big-box retail but out on the roads of rural Hinds and Madison counties where I like to ride my bicycle. I find that almost every close call I have cycling, the driver is jabbering away on their cell phone totally unaware that I am on the road too. I have never felt the least bit threatened by "panhandlers" (not crazy about that word). When I see them, I usually think only by the grace of God that I am able to give money rather than beg for it.

Donna, I know we disagree sometimes but I hope you don't think that I'm a coward sitting behind my computer screen.

No, of course not. You haven't exactly hidden your identity and you don't lie, libel and cyberstalk women. You are not among this very low class of stalkers I refer to.

And nice post. I think you're a great example of someone who can (agree and) disagree intelligently and not act like a baby when someone disagrees with you. Your self-worth clearly doesnt hinge on being agreed with--which we have in common. We need more of your ilk. We have more than our fair share of the others slinking around, waiting to be offended by disagreement. Life is too short ...

Thank you for the kind reply although I have to confess there are two women that I cyberstalk...my two daughters. :)