A Poem of Violence 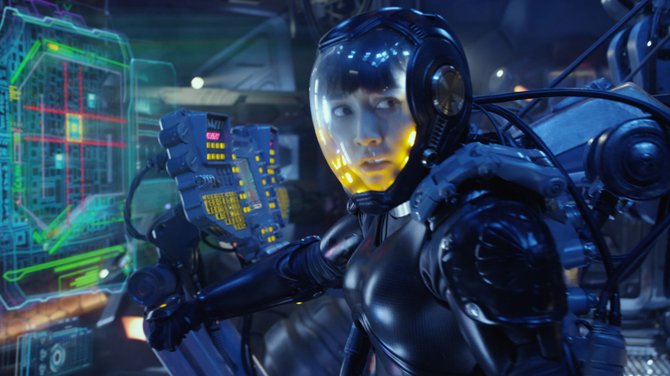 Apocalpyse fatigue threatens the stability of all moviegoers this summer. It's mid-July, and after "Man of Steel," "Iron Man 3," "Star Trek Into Darkness" and "World War Z," does anyone really want to see another guns a-blazing, hair-raising, end-of-the-world-as-we know-it pulp fiction monstrosity?

The last movie I wanted to see was "Pacific Rim." Its trailer promised yet another alien invasion set to a growling horror-filled score of thumps and bumps. Despite my preconceptions, I was knocked out of my low expectations by Guillermo del Toro's tortured cinematic creation that inexplicably kept me on the edge of my seat to the end. To my surprise, technology did not overwhelm the story, but that may not be saying much as technology is the story. Man builds giant robots to battle big aliens. The story is not any more complicated than that.

Like del Toro's prior work, including "Pan's Labyrinth" and "Hellboy," "Pacific Rim" explores destruction of the human soul, and immediately plunges us into a visual and emotional nightmare. The threat against mankind isn't from the sky, but from deep within the Earth, where a portal transports skyscraper-sized aliens through the Pacific Ocean. The Kaijus, the name given to these extraterrestrial predators, attack coastal cities and destroy beloved landmarks, such as the Golden Gate Bridge.

To combat the monsters, a global initiative creates a special type of weapon, known as Jaegers, which are behemoth robots controlled by two pilots through a mind-drifting neuron link. The pilots become rock stars, the Kaijus are commemorated in action figures, and the world adapts to the new conditions. Human complacency, however, leads to frisky aliens and an acceleration of their invasion attack.

Stacker Pentecost (Idris Elba), commander of the Jaeger forces, devises a plan to cancel the apocalpyse. His ragtag team includes washed-up pilot Raleigh Becket (Charlie Hunnam), whose brother was snatched away from him in combat, and rookie trainee Mako Mori (Rinko Kikuchi). Raleigh and Mako pilot Gipsy Danger, an analogue relic of robot technology of "Iron Man" vintage. Because of the whole I-get-in-your-mind thing required to activate Gipsy Danger, there's sexual friction between the pilots.

Bruised and buffed, Raleigh has no edges. He stands about blandly, uncertain, on the sidelines. He has eye-candy appeal, frequently taking off his shirt to reveal fine scars on his taut torso. Mako has more oomph. As a child, Mako barely survives a Kaiju attack. The finest moment--containing del Toro's perhaps most lyric, fairytale images--is when young Mako stumbles through the wreckage, searching for her family, clutching one shoe with tears streaming down her face.

The main action takes place in Hong Kong, an ode to the enduring work of the Japanese filmmakers who brought us "Godzilla" and other monster movies. The congested megalopolis sets of Hong Kong are extraordinary, and they're lovingly, perhaps obsessively detailed. This is the future as a black market, made up of scrambled, sordid aspects of the past with enormous, mesmerizing structures made from Kaiju carcasses. The face of the black market is the lizard-like Hannibal Chau (Ron Perlman), who capitalizes on alien remains. He's an unscrupulous dealer of brains and other parts, who prefers making a buck to engaging in charitable causes--like saving the world.

Del Toro isn't great on the mise en scene. In the action sequences, on land and at sea, we're never exactly sure where we are. At times it seems that the Jaegers cause as much damage to human life as the aliens they are trying to destroy.

Parts of this movie grab you by the throat. And this film probably won't leave you feeling crummy the way junk-food movies usual do; in visual terms, at least, "Pacific Rim" is terrific junk food. For many moviegoers, this may be a triumphant experience revealing a tortured poem of violence and sci-fi imagery that builds on movie classics and transcends the genre into an epic rock-'em-sock-'em battle.