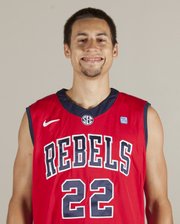 Henderson burst on to the college basketball scene last season because of his colorful on-court style, becoming the player opposing fans loved to hate while the Rebels fan base embraced him with open arms. The guard's antics included popping his jersey after hitting a game-winning shot against Auburn and doing the "Gator Chomp" in the SEC Tournament against Florida.

The Rebels star led the SEC in scoring last season and helped the team to one of their best basketball seasons in school history. With Henderson's shooting, Ole Miss nearly reached the Sweet 16 of the NCAA Tournament. Wins over Florida in the SEC Tournament and Wisconsin in the Big Dance highlighted the season.

Henderson won the Howell Trophy this year as the best men's basketball player in the state of Mississippi. He is the first Rebel to win the award.

But since the end of the season, Henderson has been in the news for all the wrong reasons. After his final game, he gave the court giving a one-finger salute to fans. The Rebels lost 76-74 to LaSalle.

In April, the guard posted a message on the Ole Miss website thanking fans for their support and apologizing if he offended anyone. In June, the NCAA reprimanded Henderson for making his "inappropriate gesture" after the LaSalle loss.

This is not the first time Henderson's off-the-court behavior has outshined his on-court game. The guard has had trouble since high school, and his behavior followed him to Oxford.

When he was in high school, Henderson was busted for trying to buy $800 worth of marijuana with counterfeit currency, which landed Henderson with two years of probation. Still, he fielded scholarship offers from Gonzaga, Notre Dame and Stanford. Henderson started his college career at Utah, where he refs ejected him from a game for throwing a punch at a BYU player. Henderson received a one-game suspension.

After one season at Utah, where he was the team's second leading scorer, he transferred to Texas Tech, but never played a game for the Red Raiders.

Before leaving Texas Tech, Henderson spent four months in jail for violating his probation after testing positive for marijuana, alcohol and cocaine.

Henderson then enrolled at South Plains College, where he helped lead the team to the 2012 NJCAA National Championship with a 81-68 win over Northwest Florida State College.

Herren's demons are also well documented. The former NBA player has battled drug and alcohol problems. He has was the subject of "Unguarded,'' an ESPN 30-for-30 film, and he wrote about his struggles in the book "Basketball Junkie: a Memoir."

Ole Miss must walk the fine line between wanting to help a player and become an enabler just long enough to win games. Rebels coach Andy Kennedy will take the brunt of any fallout--the Ole Miss coaches admit they knew about Henderson's past before signing him.

Henderson's college career can still be salvaged if he meets conditions the school set (but did not make public). Henderson definitely won't be a lock for an NBA career if his college career is over before his senior year even starts.

He is a streaky shooter. His game can shoot a team to a blowout win or right out of the game. Henderson's game is close to former NBA star Allen Iverson or current New York Knicks player J.R. Smith.

Henderson will also have to face his past if he hopes to make it to the NBA. Pro teams may be wary of taking a chance on the Ole Miss star, especially if he doesn't do what's necessary to get back on the Rebels team this fall.

The ball is in Henderson's court—the only person who can help Henderson is Henderson himself.