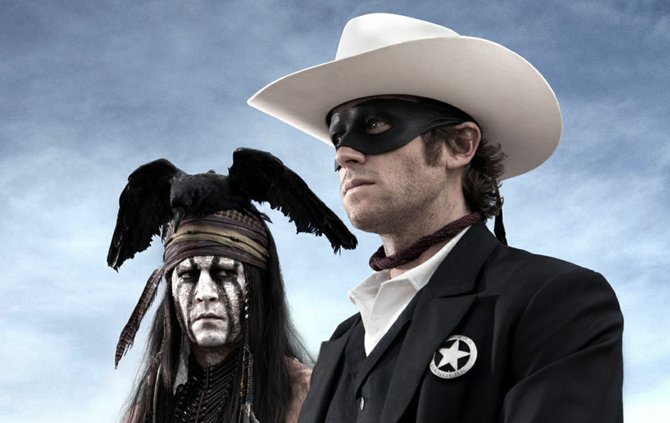 "The Lone Ranger," Disney's latest big-budget extravaganza, flits and flirts through every conceivable cinematic stereotype, starting with a picture-postcard opening—complete with red balloon floating into the wind—and culminating with a galloping montage set to the "William Tell Overture" and a "Hi-Yo, Silver!"

It's exhausting. I saw the film with a packed audience, and the 'tweens and under heartily laughed at Tonto, the gimmicks of the jokester white spirit stallion and the sight gags. But they gasped at the brutal slaying of the Texas rangers and the epic slaughter of Native Americans defending their land. Adults and kids alike were confused at the manic sense of disproportion.

Judging movies has no objective rules, but it does have concepts. One such concept is the distinction between drama, comedy and gag writing. Drama explores human conflict and tension. Humor has a place in drama, but it takes center stage in comedy, where the humor grows out of situations and contributes to a mood or an idea. In gag writing, the joke is brought in for the laugh. This movie indiscriminately crosses the boundaries of all three. It flails from one extreme to the other, making it more akin a theme park experience than a cohesive film.

So what happened, Kemosabe?

Trying to recreate the magic of "Pirates of Caribbean," Disney brought in director Gore Verbinski. He's talented and has a wonderful visual eye. Verbinski is good with actors, and he knows how to entertain. But with a movie budget of a quarter-billion dollars, the auteur director gets lost in committee. No one voice threads the film together.

The movie opens in San Francisco circa 1933. (The year's important; that's when the Lone Ranger made his debut on a Detroit radio station.) A boy emulating the masked hero chomps on peanuts while making his way through a Wild West exhibit. He happens upon the "Noble Savage" diorama and finds that the decrepit Indian on display is, unbelievably, the living and breathing Tonto (Johnny Depp). This is your reality cue: You must hold on to your hat of disbelief if you are to endure this cinematic experience.

Tonto narrates the tale of his friend, the Lone Ranger. On a train heading to Texas, Tonto shares shackles with the notorious outlaw Butch Cavendish (William Fichtner). A mere train car away, a church group sings of salvation while a mild-mannered district attorney named John Reid (Armie Hammer) spouts off theories of justice to church ladies.

A large crowd awaits the train's arrival. Rebecca (Ruth Wilson), a pretty young mom, and her son, Danny (Bryant Prince), check out the vendors hawking blue scarves of mystic charm. (That blue scarf turns up at the plot turns). Lawman Dan Reid (James Badge Dale) and his posse stand ready to pick up their prisoner. Cole (Tom Wilkinson), a suited man cursed with a glib tongue, has promised to hang Butch Cavendish. Helena Bonham Carter mingles in as Red, the town's fashionable madam. Her ivory leg prosthesis shoots to kill.

Having set the key players, the movie launches into action with the speed of a runaway train. If you are a John Ford fan, you will recognize nods to "The Searchers," "The Man Who Shot Liberty Valance" and the famous vistas of Monument Valley. But everything gets blurred in imagery, plot and joke overload.

Tonto frequently overshadows his vigilante partner. He gets the good bits, and his black-and-white face paint with the dead raven on his head is eye-catching. Depp, of course, is the wild card that keeps the film off balance. He infuses a bit of anarchy into filmmaking-by-committee.

Depp and Hammer play well against each other, and though no one gives a bad performance, Ruth Wilson is relegated to the flimsy damsel-in-distress role. Fichtner does a particularly stellar job sniveling his lips together and ripping the heart out of lawman in a metaphorical and literal way.

The result is like flinging too many colors on canvas. Instead of aesthetic pleasure, the colors muddy into black and become flat and one-dimensional.