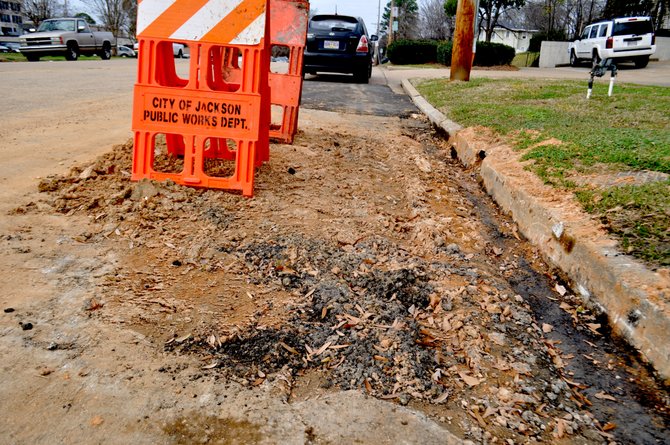 The city will repay the bond with a  1-mill fund that the city sets aside specifically for street repaving. A mill is a unit of property tax equal to about $10 on a $100,000 house. The 1-mill fund takes in about $1 million per year in property taxes.

Chris Mims, city communications director, said he expects the council to vote on the bond issue in the next two to three weeks.

Mims said Jackson's streets total about 1,200 miles of pavement. The city is currently in negotiations with Alberta, Canada-based consulting firm Stantec Inc. to rate all of those streets on a scale of 0 to 1,000, with 0 being a street in dire need of repair and 1,000 being a brand-new street. Once Stantec rates the streets, the city will use the list to focus on repaving streets with a rating at or below 300.

APAC Mississippi Inc. will soon begin work on the city's yearly street repaving, Mims said, which is separate from what the bond issue will fund. The approximately $1 million project will include 26 streets in the city, with the possibility of two or three receiving a new surface along the entire street.

The city will pick back up on another $1 million project to resurface 25 major intersections once the weather warms up some (or stays warm long enough), Mims said.

"Some of these major intersections are really pretty bad," Mims said.

Stantec Inc. is an engineering and infrastructure consulting firm with offices in seven countries and 37 U.S. states, including offices in Jackson and Vicksburg.

APAC Mississippi is a Jackson-based asphalt and pavement company.

All cyclists in Jackson will soon have to wear a helmet, or they could face a $75 fine.

After weeks of discussions in the Jackson City Council's Transportation Committee and by the full council, members unanimously passed an ordinance Jan. 22 that requires bicycle riders of all ages to wear a helmet.

Council President Tony Yarber, Ward 6, who had expressed opposition to the bill, and Margaret Barrett-Simon, Ward 7, were absent from the meeting.

Lee Jenkins, executive director of the Brain Injury Association of Mississippi and an outspoken proponent of the ordinance, said that she was happy to see the ordinance pass. She said in the past year, BIAM has worked with 10 to 15 people who have sustained brain injuries while riding a bicycle without a helmet.

Jenkins addressed the Council at the Jan. 22 meeting, as well as several previous meetings when members discussed the ordinance. She gave several statistics to back up the need for an ordinance, including a National Highway Traffic Safety Administration study that estimated 40,000 head injuries could be prevented every year if all children ages 4-15 wore helmets while riding bikes. Jenkins said she is thinking about pushing for a similar ordinance in Madison, where she lives.

The only exceptions to the ordinance came in the form of an amendment, which Quentin Whitwell, Ward 1, introduced. The amendment made the ordinance invalid in cul-de-sacs and on dead-end residential streets. The council passed the amendment.

Whitwell had opposed a bike-helmet ordinance at previous meetings. On Tuesday, he once again expressed some disagreement with the bill.

"Whenever I feel like the safety demand exceeds the personal-liberty aspect, that's when I get very cautious," Whitwell said.

The council's lone Republican seemed to be playing politics, though. After his comments, Whitwell introduced his amendment. With that amendment in place, Whitwell voted for the ordinance.

The State Department of Rehabilitation Services agreed to help provide helmets for riders who cannot afford them. The council urged the Jackson Police Department to carry the spare helmets in their patrol cars for riders.

Attempts to reach the department for comment prior to publication  were unsuccessful.

The ordinance will take effect as soon as the mayor signs it.

Johnson said Jan. 26 that he won't second-guess the council, and will sign the ordinance when it comes to his desk.

The busy Council meeting for the transportation committee also produced an amendment to the city's ordinance governing taxicab fares.

The Council approved an increase in the maximum fare cab drivers can charge while waiting on customers from $21 to $23 per hour.

Transportation Committee Chairman Chokwe Lumumba, Ward 2, said committee members originally proposed setting the maximum at $36 per hour. A taxi professional informed the committee, though, that drivers can change the meters to an idle setting, so that it doesn't calculate the same charge it would while transporting customers, Lumumba said. Therefore, the committee didn't believe such a drastic increase  was necessary.

Mississippi’s congressional delegation receives plenty of campaign cash from health-care and related groups, such as pharmaceutical lobbyists. The following figures include funds they received in 2012 from health-industry political action groups and individuals in health fields.

What make Jenkins think helmets can be relied upon to to prevent brain injury when helmeted individuals suffer brain injuries? And just why are people on bicycles singled out for helmet use when motorists and pedestrians suffer brain injuries at the same, or greater rates? Prevention is the best way to reduce the incidence of brain injury but attempting this through helmet use has proven to be ineffective. What needs to be done is proper enforcement of responsible road use, but that's much more work now, isn't it?