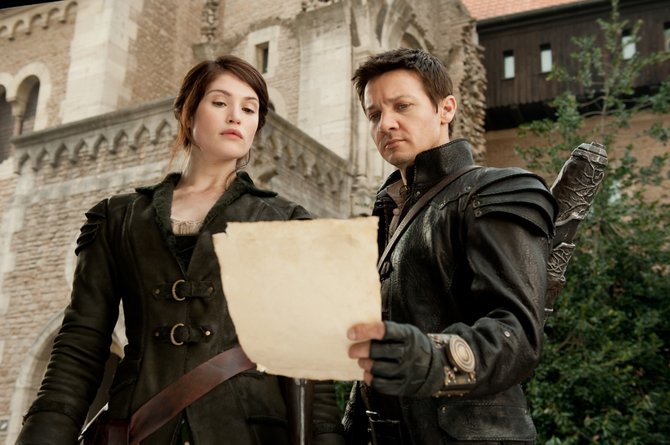 "Hansel & Gretel: Witch Hunters" will explode your previous concepts of grim and tedious. In this blasphemous fairy tale, written and directed by Tommy Wirkola--who obviously didn't get the memo that fairy tales are meant for children--little Hansel and Gretel have grown up. Ripped and handsome Hansel (Jeremy Renner) and curvaceous Gretel (Gemma Arterton) pair together to rid the dark forest of the pestilence of hags on broom sticks.

Damaged and scarred from the traumas of their youth (Hansel has to take insulin shots because he ate too much sugar), H&G get their kicks killing witches. To paraphrase and take some creative license from another fairy tale, you can sum up this movie in this rhyme: "Fee-fi-fo-fum, orphan brats hunt witches for fun. Be they live or be they dead, H&G revenge the past and burn the heads."

And, boy-oh-boy, what H&G do to those witches: They blast them with rapid-fire bazookas, spear them with arrows, decapitate them and explode them into fireballs.   This medieval tale opens in the sepia moment of once upon a time. But, this film is an R-rated tale, so "once upon a time" is a visual concept, not a spoken one until much later when the big bad witch (Famke Janssen) blabs about tales of the past.

Pint-sized Gretel and her brother shiver in a bedroom they share in a little shack lost in the woods. To emphasize that they are in a dark forest worthy of Teutonic story telling, Wirkola hovers and swoops the camera above the tops of dark green trees. The moon shines full and bright.

H&G's father, who seems kindly enough, escorts the kids into the woods and tells them to hide. He disappears, never to be seen again. Eventually, H&G find their way to an edible house and begin slurping down the icing roof and stuffing their faces full of cookie walls. The front doors magically open, revealing a pit of black. Now, some of you might be tempted to shout at these orphans, "Don't go in!" But if they don't we'd have no movie and H&G no incentive to become witch hunters, so it's best just to hold tight to your 3D glasses.

This is H&G's first kill, and it changes their lives forever. If you have perhaps nodded off and missed the moment, the music punctuates the evidence. The children find a weathered old witch, who chains them up and lights the oven. It's dinnertime. Instead, the ever-resourceful Gretel loosens her bindings and strangles the witch. Hansel completes the job by decapitating the crone and stuffing her remains into the hot oven where her body incinerates into ashes.

Spoiler Alert--I hate to be the bearer of bad news, but Hansel and Gretel are 1) not very smart; 2) inarticulate; and  3) homicidal maniacs. "The only good witch is a dead witch," grunts Hansel to a beautiful young woman with long, flowing ginger locks who has seduced him in a therapy pool of water. She gives him a bewitching smile. Anyone with half a brain would be curious if she was perhaps--dare I say it?--a witch.

H&G never save any children from witches. The troll does that. In fact, the troll named Edward is the only interesting character in this psychotic film. Edward (Derek Mears) doesn't speak. He just looks at Gretel with big sad eyes and an empathetic expression on his large, long face.

I really liked the troll. "Why am I here?" he seems to communicate with every wrinkle in his shriveled troll face.

All roads in this film lead back to where they began. You just can't escape the nightmare of childhood. Hansel races to the dilapidated gingerbread house where he had his first witch kill and grandly announces, "You've got to be fcking kidding me." He races in. A few minutes later, Gretel, posing with her guns, looks at the same house. She says, "You've got to be fcking kidding me."

This movie is a horrid joke, particularly if you pay the extra bucks for the 3D experience. Wait for the video game; it will have more substance.