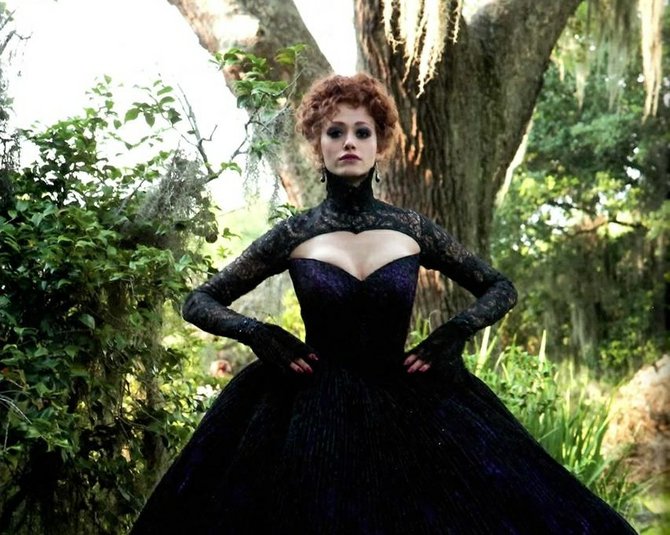 "Beautiful Creatures," the Richard LaGravenese film that sequesters acting giants Jeremy Irons, Emma Thompson and Viola Davis into the shadows, is for audiences who can lose themselves in a southern Gothic romance between Happy Home Boy and Hormonal Witch Girl. Witch Girl, known to mortals as Lena Duchannes, doesn't have yellowy canine teeth or hairy facial warts or even a broom, but a dark and dreaded curse follows her like the migrant dust storm over Pig-Pen's head.

Based on the young-adult novel written by Kami Garcia and Margaret Stohl (the first book in the Caster Chronicles series), the movie asks an ancient question.

When Hormonal Witch Girl (Alice Englert) turns 16 years old, will she be: (a) a fluffy pink-clad goddess of goodness waving a sparkly wand around short people on yellow brick roads; or (b) a murderous psycho bitch with one eye slipping through a thick dark curtain of hair to stink-eye men into insanity?

If family history is any predictor, Hormonal Witch Girl is doomed. Her cousin is a siren, and her mother is an invisible evil spirit inhabiting the body of Mrs. Lincoln (Emma Thompson), the churchy lady leading the witch hunt. (We are meant to find this ironic that the town's leading Bible thumper has been so easily possessed.)

This is the cue for Happy Home Boy (Alden Ehrenreich), known to family and friends as Ethan Wate, to skip onto the screen. Actually, the movie begins with Happy Home Boy's voice over. He narrates a short tour of his hometown. Nestled into oblivion after taking the non-winning side in the Civil War, small town Gatlin gasps a raspy dying breath. It has no Starbucks, portentous of the boonies. Twelve churches line its few blocks, with one library guarded by Amma (Viola Davis) and a decaying movie theater for groping couples.

The town's inhabitants include mean-spirited high-school girls who mock Hormonal Witch Girl, drab parents, clueless teachers and the mysterious Macon Ravenwood (Jeremy Irons), a direct descendant of the town founder and the richest guy in town. Macon is also Hormonal Witch Girl's uncle and protector. Like Home Boy's now-dead mamma, Macon refers to Gatlin citizenry as folks who are "too stupid to leave or too stuck to move."

Crazy dreams haunt Happy Home Boy, bursting only the slightest air from his balloon. His dreams play in a sepia-toned reel of battlefields and gunshots. A beautiful girl squeezed in antebellum hoops hovers above his prone self. He wakes before the images congeal into meaning.

On the first day of class, the muse of his nightmares appears in the flesh of Hormonal Witch Girl. The mean girls (Zoey Deutch and Tiffany Boone) call Lena out. "Witch, witch," they taunt. The floor trembles. and the windows shatter, cutting flesh and creating classroom chaos. The mean girls  speak true.

Happy Home Boy is smitten. He hitches himself to Hormonal Witch Girl, meets the ghoulish family and helps her solve the mystery of who she really is. Hormonal Witch Girl tries to save him: "Get out. Go Ethan. Claim yourself, in science, in hope, in love, infuriating gratitude. Claim the light; claim the dark. Claim it all!"

Slit out the belly of this film, and a gushing mess of sappy romantic entrails sticks to the floor. In the hands of lesser actors, this movie would join the likes of the "Twilight" franchise and its countless imitators.

"Beautiful Creatures," however, is better than that. It has two talented young leads surrounded by three acting legends. The presence of Davis, Thompson and Irons provides  ongoing suspense.

Why doesn't an Academy Award or Oscar nomination shield you from this level of exploitation? Now that's a real horror story—the selling of souls to pay bills. This movie is torment viewed through pagan eyes of real world experience. But it's better than certain "Romeo and Juliet" rehashings—the nuance comes from inspired casting.