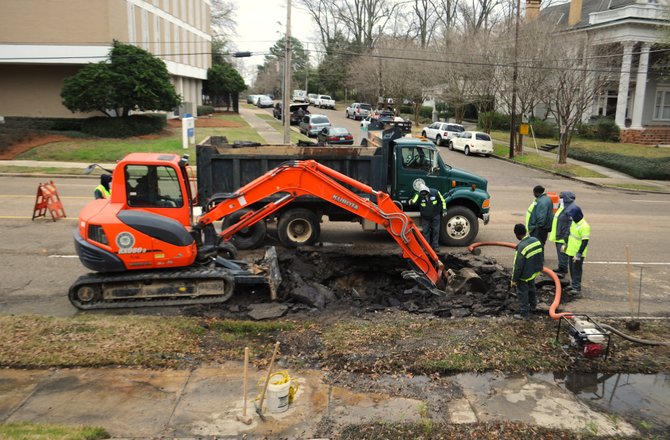 Johnson wanted to issue $10 million in general obligation bonds to fund a widespread transportation project. Several council members thought the terminology of the proposal was too broad, and could allow for funds to go to projects such as parking garages.

The committee shot down the project by a 1-5 vote. Only Margaret Barrett-Simon, Ward 7, voted for the project. LaRita Cooper-Stokes, Ward 3, was absent.

Bluntson said that not only did the proposal allow funds to go beyond streets and sidewalks, it wasn't specific about any particular projects.

"(The proposal) didn't even have a list of streets so we could see it," Bluntson said.

Quentin Whitwell, Ward 1, said the annual millage, or property tax rate that the city uses for street repaving, would have to go toward repaying the bonds for the next 10 years if the proposal passed. That, he said, would take away all of the council's power over street projects.

The city is currently in negotiations with Alberta, Canada-based Stantec Inc. to rate all of the city's streets on a scale of 0 to 1,000, with 0 being the worst and 1,000 being a brand-new street. Johnson planned to use those ratings to decide which streets to repave first. The mayor said the administration would have presented any proposed individual street projects to the city council for feedback before beginning work, but that wasn't enough to get the committee on his side.

"I do appreciate the Council's willingness to consider this proposal," Johnson stated in a Feb. 25 press release. "This would have been one option where we could have made a substantial impact in every ward. In the absence of a major source of funding, we will continue to work with the resources that we have to address as many streets as possible."

Johnson said that a bond issue is not the ideal method to fund street repaving when he spoke about the project at his re-election campaign celebration Jan. 26.

The city will soon begin two unrelated street-resurfacing projects worth about $1 million each. One project will add pavement to 26 streets in the city, with a select few receiving a new surface along the entire street. The yearly street repaving millage will provide the funds for that project. The other project will focus on repaving 25 major intersections throughout the city. That project began in 2012, but the city put it on hold during the cold, rainy winter months.

Correction: An earlier version of this story stated that Johnson announced the project plan at his campaign celebration Jan. 26. Johnson actually announced the plan last August, but spoke about it again in January. The JFP apologizes for this mistake.

Stokes was absent? This brings her attendance percentage to what, 11%?