$5 Million Makeover Comes At a Cost 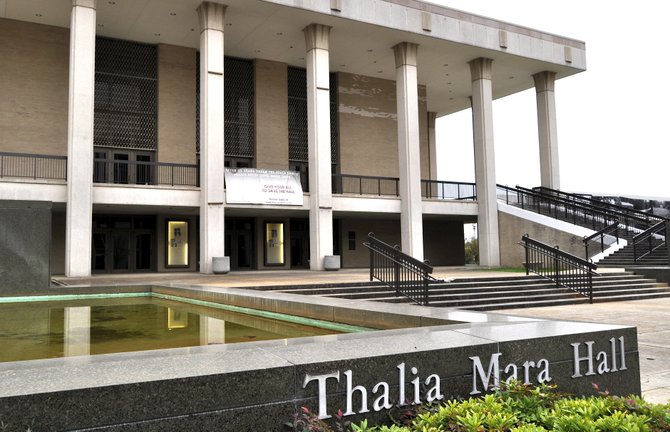 Thalia Mara Hall badly needs upgrades, but not at the cost of regular users of the buildings, some say. Photo by Trip Burns.

The Jackson City Council voted Monday to pump an additional $1.89 million into the city's Department of Human and Cultural Services to provide "funds needed for an expanded scope of services determined essential for the Thalia Mara project."

That project includes a complete renovation of the theater, which needs major renovation before it hosts the International Ballet Competition, beginning June 14, 2014. It may also come at considerable cost to regular users of the historic theater.

The city council voted 4-2 Nov. 19 in favor of adding a $5 surcharge to all ticket sales for events at Thalia Mara, once it reopens, to help pay for the renovations. Ward 1 Councilman Quentin Whitwell and Ward 7 Councilwoman Margaret Barrett-Simon voted against the measure, citing concerns about the effect the surcharge could have on the local arts community after the IBC packs up and moves on.

Those concerns may not be unfounded.

Local promoter Arden Barnett, who has built his entertainment company ardenland around Jackson's music scene, said he won't be able to organize and promote concerts at Thalia Mara with the $5 surcharge in place.

"I think that surcharge is a tragic mistake," Barnett said. "A $40 ticket suddenly becomes a $45 ticket, then you add in the Ticketmaster charges, and you're paying nearly $55 or $60 a ticket. It adds up quickly, and five dollars is a huge spread. I know it's going to limit my ability to organize concerts there in the future."

Ardenland has hosted folk legends Willie Nelson and Lyle Lovett and rock 'n' roll bands Wilco and Yes in the past 18 months, and while he said he's all for the renovations, he doesn't think the bill should be passed to the people who use the building the most, especially without their input.

"It's too much," he said. "I've already had to pass on two shows this year, and that's two shows that won't be happening in Jackson as a direct result of that decision."

Thalia Mara Hall Director Michael Raff, a former director of Human and Cultural Services, said the state has kicked in $1 million on top of the money the city is expected to pledge, and the private group "Friends of Thalia Mara Hall" has secured $1.3 million in pledged support, and hopes to raise more.

"We've got a fund set up through the Community Foundation of Greater Jackson so people can go through them to make a charitable donation," Friends of Thalia Mara spokesman Kelly Scrivner said.

"The $1 million in matching funds from the state will go toward accessibility, and the city will be working on things like safety and air conditioning, so what Friends of Thalia Mara will be using its funds on are the cosmetic aspects of the renovation."

Scrivner added that the organization plans to continue raising money throughout the renovation.

The lighting and sound system are also due an update, Raff added, and Americans with Disabilities Act-compliant seating is also a concern.

"The only ADA seating we currently have is on the back row," Raff said. "That's not fair. We want to make better seating available to folks in wheelchairs. Once you add all of these things together, you can see why it won't be hard to spend $5 million."

Thalia Mara will be open next week for filming of the James Brown biopic "Get On Up," but it will close its doors for five months after that to undergo renovations.

Both Raff and Mayor Chokwe Lumumba cited economic studies showing that the impact was approximately $10 million the last time Jackson hosted the IBC in 2009.

Arden Barnett makes a curious argument: that those who use a facility should not help pay for its maintenance. My counter question is this: Who should?

I agree that that the decision should have been far more transparent than it was. The decision never went outside of a very small group of people in charge. That really sucks, but hey, life is rarely fair. I don't want to pay an extra 1% in sales taxes to fix Jackson's infrastructure, either, but I will, because the alternative is even worse. At least I'll get to vote for the latter.

It seems unlikely that people who can afford $40 or $55 for a show will be financially overburdened (or even dissuaded, much) by spending another $5, IMHO, to see an act they really want to see. You might not like it, but it's probably not "considerable" money; heck, it barely buys a couple cups of decent coffee. (I kind of doubt these buyers choose between seeing a Lyle Lovett show and feeding their children, so Barnett sounds a bit overwrought to me.) However, as a community asset, I have no argument for having part of the funds for renovations coming from the community that benefits from its existence--especially if the option is to allow Thalia Mara Hall to disintegrate.

What mechanism automatically disqualifies a show when the ticket price goes from $40 to $45 or $55 to $60 as Barnett implies? Is there some market research that shows ticket sales will drop precipitously by such an increase without other factors (such as an acts' already shaky following) in play? Or is it that Ticketmaster refuses to give $5 back to Thalia Mara?

By my reckoning, $40-$60 tickets generate from just under $9,500 to more than $140,000 if Thalia Mara's 2,362 seats are full for one show. I find it difficult to believe that promoters can't make that math work for touring acts, even with all the other entertainment industry entities due payments and commissions. After all, those who make money from a $50 ticket won't make less if another $5 goes to maintaining the hall.

Here's a suggestion: If attendees are so burdened by spending another $5, they could go low-tech (sacrilegious, I know) and buy directly from Thalia Mara. It may be a little less convenient, but the sale would support a local asset instead of enriching Ticketmaster's coffers, and buyers will likely save a lot more than $5. Ticketmaster won't miss it, but Thalia Mara surely will.