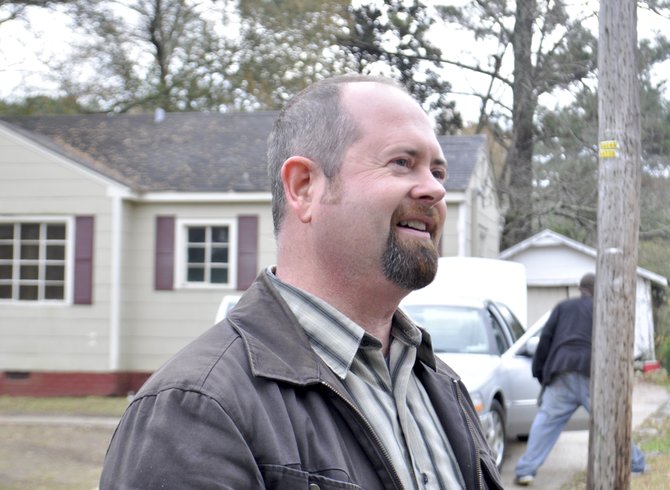 The smaller crowd could be indicative of the uphill battle the faith-based alliance faces as it tries to help communities fight back against lawlessness and convince young people to make smarter decisions.

"Well, we don't have our thousand, but I'm very impressed with the people who showed up," said Yarber, a pastor at Relevant Empowerment Church. "We're headed out into some South Jackson neighborhoods near Raymond Road. We're knocking on doors, telling people we're a faith-based alignment in the community, and we're here to help them get their issues addressed."

Once the volunteers retrieved the information, Yarber said he would log it into a database, so they can see where the problem exist and try to direct services—whether to police presence, a the watch program or something else the churches can do—toward that area and that particular problem.

Abram Muhammad, a minister with the Southern Region of the Nation of Islam (Muhammad Mosque No. 78), set up the system. Muhammad said he had also assigned his best Internet technician to build an online forum where preachers and ministers of different faiths could open the lines of communication, share ideas and organize events to show solidarity against crime.

Jackson is the latest city, but certainly not the first, to see its churches organize around a common goal like reducing and preventing crime.

A 2011 memo from the U.S. Department of Justice addressed faith-based alignments, saying sometimes they can be more effective than similar programs without a common theme for participants.

"Unlike their secular counterparts," it says, "many faith-based organizations are often uniquely suited to bring together residents and local leaders to address pressing challenges and to empower people to improve their lives, the lives of their family members and their communities at large."

The Office of Justice Programs assists faith-based groups with programs throughout the criminal-justice spectrum, ranging from youth-violence prevention to crime victim assistance to prisoner re-entry.

Although the holiday season is traditionally a busy time for police departments, Jackson has been lucky, so far. The latest JPD crime records show that, while property crime is down 12.2 percent overall, the city has experienced a slight uptick in violent crime from 2012 to 2013. Murder is down from 57 in 2012 to 51 in 2013, year-to-date, with armed robbery and carjacking both up, 12.5 percent and 8.2 percent, respectively.

Matt McGue, pastor of One Church, a new, multi-ethnic church currently meeting at the Ridgeland Recreational Center, stood with Yarber at his announcement Dec. 6, and followed up eight days later at New Horizon for the door-to-door march. McGue, Brittany Smith and Mike O'Connor together participated in Jackson's Crime Alignment's initial day of community outreach.

After helping to set up a multi-ethnic church in North Carolina, McGue moved to Jackson with his wife and grown son to start One Church. McGue joined Yarber's alignment against crime, and went door-to-door in a neighborhood off of Ellis Avenue below Interstate 20.

"I saw that Tony, who is a friend, was pulling together people of all faiths and denominations and had called a meeting together through Facebook, and I said, 'Hey, I'll be there,'" McGue said. "I loved it. I think the church has got to repent for its silence, inaction and its acceptance of the status quo. When it comes to injustices, social and moral issues, the church has been silent for too long."

Going door-to-door, McGue said he got a chance to hear about some of the problems they are having.

"The people in these neighborhoods that have had problems are just like people from any other part of the city," he said. "We all want the same thing—to live in a peaceful neighborhood that we can raise our kids in and actually love our neighbors."