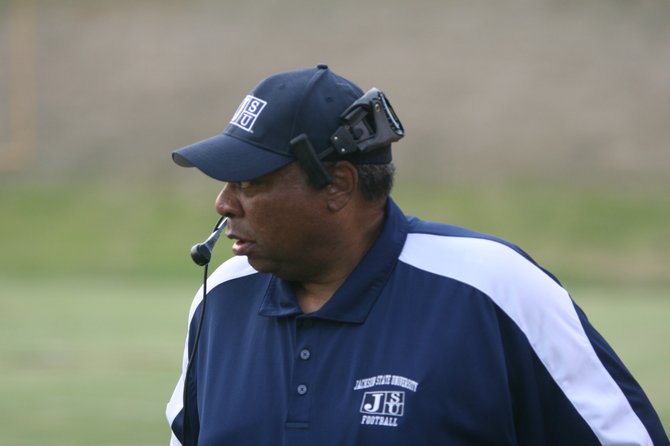 Comegy finished 8-4 this season overall but finished 8-1 in SWAC play. The Tigers' only loss before the SWAC Championship Game came in the final game of the season against Alcorn State.

Jackson State released a four-paragraph statement about firing Comegy. It contained one quote by Director of Athletics Vivian F. Fuller.

"We are grateful to Coach Comegy and his staff for their service to Jackson State," Fuller said. "We appreciate the work he has done with JSU athletics and we wish him well." University spokesman Eric Stringfellow pointed to possible problems within the program, saying the next coach would "recruit local" and "players would have discipline as part of their DNA."

The bare minimum of a statement for a coach that posted a 55 to 35 record over eight seasons at the university.

Stringfellow said wins and losses were not the entire issue.

"This isn't just about wins and losses," Stringfellow said. "If you've done your homework, you can see that Coach Comegy has had some success. This is about the direction of the program and about our student athletes, putting them in a position to be successful."

Comegy, 49, won and lost just 21 regular season SWAC games during his time at Jackson State. He had just one losing season at 3-7 in 2009. Comegy also had a winning record against JSU's main rival, Alcorn State, at 5-3, but had a 2-6 record against Grambling State.

The SWAC as a whole is having issues with facilities and academic problems with the NCAA's academic progress rate requirements. Some of those problems came into play this season for Comegy and the Tigers when the Grambling State University players went on strike, costing JSU this year's homecoming game.

Comegy did everything he could but win the SWAC championship game the last two years. He was 1-3 in the conference's title game with the lone win coming in 2007. SWAC teams don't take part in the Football Championship Subdivision so the SWAC Championship Game is as far as Comegy could take the Tigers. His salary, at just under $200,000 a year, is a bargain in today's college football world for a winning coach.

Comegy did better than the man he replaced, James Bell, who went just 8-23 and led the Tigers to three straight losing seasons. Comegy replaced Bell and promptly went about restoring the program.

According to the College Football Data Warehouse, Comegy is third all-time in wins at JSU behind John A. Merritt (63 wins) and W.C. Gorden (119 wins). This season, Comegy passed James Carson (54 wins) to move into third place.

Comegy will be paid a $50,000 buyout and Antonio Knight, also recruiting coordinator will lead the program until a replacement is hired. All of the assistant coaches will be let go as soon as their contracts expire on December 31st, but could be rehired by the new coach.

Unless there is some unknown scandal, and a major scandal at that, Jackson State did itself a major disservice firing Comegy. Finding another winning coach at less than $200,000 a year will be hard for JSU.

No matter who the university hires, it better hit it out of the park. A bad hire could turn the fan base against the current athletic administration.

When did the SWAC regain its qualification to participate in the Tournament, CSN?

Regardless, Comegy should not have been fired!