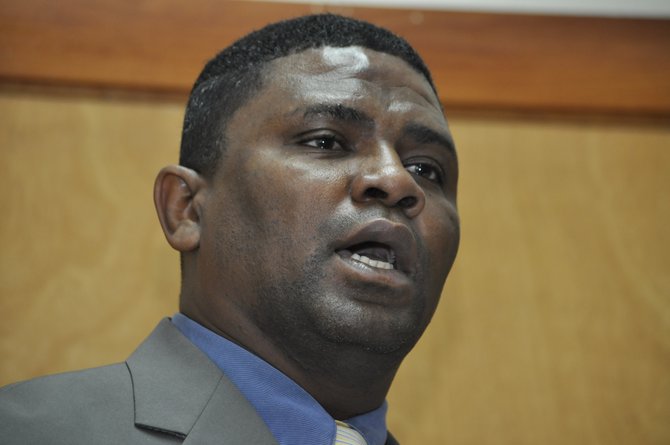 Willie Bell (left) holds up a corroded and brittle portion of piping that shows the age of water lines downtown.

City officials took their message to the people Sunday evening in the first of several town-hall style events, kick-starting the massive task of selling Jacksonians on a proposed 1-percent sales-tax hike.

"We're serious about building a new Jackson," Lumumba said. "Once we start working on this infrastructure, and you see it change, then you're opening the door for new businesses to come here. In order to get them here, they are going to have to see on the map that in the future, the infrastructure is going to be better and not worse."

The city is asking for a proverbial steroid shot, in the form of financial stimulus, for the city's ailing roads, water delivery, waste management and drainage systems. The public will vote on the sales tax Jan. 14, 2014.

Bell explained a litany of issues to the crowd, including how the city's creek system works (it doesn't) and that the city needs to replace nearly 40 miles of pipes to keep citizens from receiving precautionary boil water notices.

Neel, a longtime proponent of the 1-percent sales tax, brought a portion of corroded pipe with him to show citizens, first-hand, what kind of problem the city's Public Works Department faces. He explained that the city has spent $129 million since 1997 to rehabilitate the city's outdated water system, but that still left $25 million worth of projects that have already been designed, but not constructed.

"What I want to impress on everyone is that, even with the water-line breaks, we don't really have an appreciation for what's under the ground," he said. "We've done a study of all the water lines in the city, and tried to do a general evaluation of their condition.

"As you can see," he added as he held up a corroded and brittle portion of piping, "this shows the age of the water lines, particularly downtown."

Lumumba also asked that meeting attendees sign up to help get out the vote for the referendum, and compared the election to his own last year.

On Monday morning, drivers swerved around a burst pipe under Lakeland Drive near St. Dominic's Hospital that sent water bubbling up through a crack in the street, and a press release from the city extended precautionary boil-water notices for a dozen streets in Jackson.

The Department of Public Works will issue a release when the advisory is lifted. For more information, call 601-960-2723. The next town-hall meeting is set for 6 p.m. Monday, Dec. 2, at Anderson UMC South, located at 1315 West McDowell Road in Jackson.