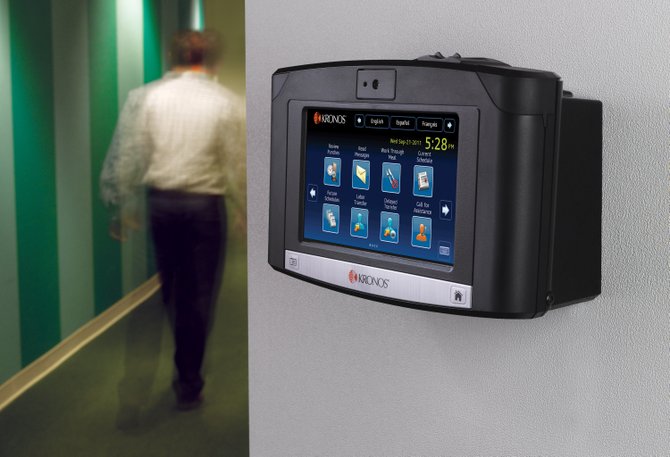 The lawsuits brought against the city in 2011 led Jackson to move to an electronic clock-in system, and it's already saved the city over $500,000. Photo by Courtesy Kronos

City officials believed switching to electronic monitoring of city employees' work hours would pay off, and now they have proof. Records provided to the Jackson Free Press show that, collectively, city employees have clocked fewer overtime hours this fiscal year and shaved enough labor to save the city more than half a million dollars.

Former Mayor Harvey Johnson Jr. said in his final State of the City address March 29 that implementing the new system would "dramatically cut down on overtime," and that's exactly what it's done.

"It's not a number that I'm shocked or surprised by," City Council Budget Committee Chairman Tony Yarber said. "I anticipated seeing some savings because I know how accounting can be when its left to so many managers."

Kronos, the global workforce management company, developed the newly implemented system, which the city bought for a one-time fee of $755,389 last year. The Chelmsford, Mass.-based company provides businesses and municipalities with the means to effectively clock their employees hours, leaving little room for exaggerating time spent on the job. To log in, the employee must provide a thumbprint and a four-digit identification number, or PIN.

So far, the city has only used the part of the service that clocks hours. Kronos also helps businesses navigate difficult management tasks such as scheduling, human resources, payroll, hiring and labor analytics. The city hasn't explored any of those options, yet, but the part of the service the Capitol City is using has already saved money. If Jackson saves the same amount on overtime in the final two months of this fiscal year, which ends Sept. 31, savings will total $656,964. If the trend continues to next year, the system will have paid for itself, and then some.

The system is saving money in more areas than just overtime. City Director of Administration Lee Unger believes it takes human error out of the equation, which should, in turn, eliminate payroll errors that result from manual re-entry of time worked and leave taken, and assure accurate and consistent pay practices across all city departments. Where the city used to spend time transporting documents from one place to another and valuable space storing them, it can now store its entire payroll system on a hard drive and transfer it with a few strokes on a keyboard.

It may seem like a small problem, but as the city has learned in recent years, poor bookkeeping can cost the city big time. In 2011, the U.S. Department of Labor sided with 41 Jackson police officers who complained about they did not receive adequate overtime pay.

Then-City Attorney Peiter Teeuwissen noted that the record keeping at JPD was not up-to-date, and advised city leadership to settle out of court. The city took his advice, and paid the overtime, plus a $27,000 fine to the Department of Labor.

"Time sheets are an inefficient and inaccurate way to keep an employee's time," Teeuwissen said last May. JPD didn't effectively upgrade its system after a 2006 investigation. As a result, "the city didn't have records to accurately reflect calculations" in 2011, he said.

Jeffrey Reynolds, the attorney who represented the JPD officers, said in a May interview with the Jackson Free Press that the DOL thoroughly investigated the situation, and found a lack of oversight on JPD's payroll to be more than a one-time lapse of organization. After the settlement, Johnson insisted the police department move to an electronic system for clocking hours.

"We started the (Kronos) program, quite frankly, because of the issues we were having with overtime," Unger, who has carried on in his role under Mayor Chokwe Lumumba, said Thursday. "Lawsuits were being filed by city employees because overtime hours were not being managed properly. We had to go to a system that was better for us."

After the city vetted several other workforce management companies, including other organizers like ADP, that system turned out to be Kronos.

"I think, with the numbers we have, there's better accounting of hours and better accountability with overtime," Unger said, "Rather that employees reporting their hours on paper or verbally, this system ties them down to being there to prove it."

"Thank You" for the implementation of the Electronic Clock - In System goes to Former Mayor Harvey Johnson. Ater reading in yeaterday's CL, citizens need something to soften the BLOW about Mayor Lumumba's plan to raise taxes.