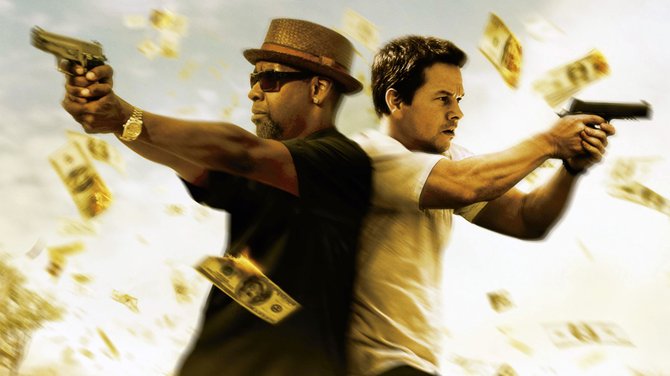 The only thing remotely understated in "2 Guns" is the title. The good, the bad, and the ugly—in the form of DEA agents, naval intelligence officers, drug cartels and low life thugs—run around with weapons of all shapes and sizes, killing people for kicks and grins and money. This is all to say that there are way more than two guns in this film directed by Icelander Baltasar Kormakur ("Contraband," "101 Reykjavik").

Based on a script written by Blake Masters, who adapts the material from the "Boom!" graphic novels by Stephen Grant, Kormakur sets up his characters during a funny scene in a diner, then puts them through a stickup that goes disastrously wrong. Most of the movie deals with its bloody aftermath.

The happiest trigger fingers belong to Robert "Bobby" Trench (Denzel Washington) and Michael "Stig" Stigman (Mark Wahlberg). They partner together to rob a bank holding $3 million dollars of drug-cartel money—or so they think. Their partnership falls apart, comes back together, falls apart, and so on, like Sisyphus pushing a rock up the mountain and then being rolled over by the rock before reaching the peak and doing it all over again.

Bobby is the cool cat. He's got gold-plated teeth, diamond earring bling and walks like he owns the world. He keeps calm and cool even when he's shot after a deal gone bad or when a bad man named Earl (Bill Paxton) points a gun at his man parts and plays Russian roulette. Bobby's tough but suave. He's an undercover DEA agent trying to bag Papi Greco (Edward James Olmos), a mysterious cartel figure who dresses like Don Juan, owns a mean, nasty black bull and beats people with baseball bats after drenching his hands in his own urine. That's creative?

Stig is more junkyard dog. He woes diner waitresses with a wicked wink, chomps his gum before mealtime and shoots to kill. His aim is always true except when he wants to miss, which is almost never, but there is one pivotal moment where he does so. He's U.S. Navy intelligence on a top- secret mission.

The opening scene features the all-American diner that serves the best donuts in a three-county radius. It's one of those places where the tables are Formica and the waitresses write your order on a green-and-white guest check. Stig and Bobby argue, joke and b.s. each other. The movie feels like it's going to be terrific, but the script doesn't have much curiosity about these guys.

When Bobby and Stig are together and flare up, their words burst out impatiently, spasmodically. In one scene, Bobby asks, "What's your plan?" And Stig replies: "I got a plan. I mean, I'm capable of coming up with a plan."

Bobby shoots back: "I'm not saying you're not capable. I'm just saying you haven't told me. What is it?"

Stig and Bobby have similar temperaments, and they're helplessly unable to be calm and rational with one another. These guys ignite each other into senseless violent acts. We are treated with them racing trucks and jeeps, wrestling and punching each other silly and, by the end, we understand that they're just playing. They are brothers or, as Stig says, "Ebony and ivory." They live together in perfect disharmony.

The obligatory girl in "2 Guns"—the one in every buddy-cop film who wears the sexy bra and panty set—is Bobby's DEA handler, Deb (Paula Patton). She buffers Bobby from their commanding officer (Robert John Burke), who's going to pull the plug on a three-year undercover operation until Bobby fibs and says that Little Toro is on the verge of flipping. Little Toro is actually dead, with his head in a bowling bag.

The film culminates in a Mexican standoff in Mexico. It's a fitting conclusion to a "Lethal Weapon" wannabe. There's nothing really lethal in this film. It's just pretend. But Washington and Wahlburg elevate the schlocky material to barely watchable and at times, funny.