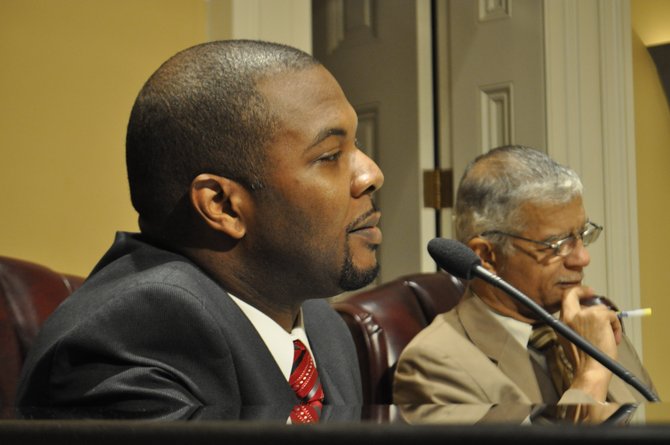 The U.S. congressman who helped get Chokwe Lumumba elected now has a direct line to the Jackson mayor's office.

Green pledged to help the city gain ground in its relationship with the state Legislature, bring the council to the table for budget negotiations and revamp the city's Web presence, among other things.

The 36-year-old Murrah High School Power APAC and Jackson State University W.E.B. Dubois Honors College graduate is the first CAO the city has had since the Frank Melton administration. He is a graduate of the Federal Cops Program, and served as the communications officer for the Hattiesburg Police Department before going to work in Washington, D.C., for Thompson.

"I think his sense of organization and his insistence on looking at the planning in the long-term is going to help a lot," Jackson Mayor Chokwe Lumumba said. "Also, his sense of interconnectiveness—seeing the interrelationship of the departments and the interrelationship of work, not only from one department to the next, but from one period to the next—will be a big asset."

The connection between Green and the mayor is Green's work as an aide to Thompson, who supported Lumumba during the mayoral race, and even lent his voice to the campaign during Lumumba's runoff against Jonathan Lee.

Thompson appeared in a radio spot that ran on several Jackson stations in which he accused Lee of being backed by "the same people who opened their checkbooks for Mitt Romney, and tried to defeat President Barack Obama" and said Lee and his supporters were using the "same old  Republican tricks."

"We share some common background in Jackson and some professional connections," Green said of the mayor after the hearing. "He's friends with my former employer, Representative Thompson. I offered my name for consideration on the transition team, and that's how we re-met, so to speak."

Green said he enjoyed working on the transition team after Lumumba's inauguration, and jumped at the chance to work with the mayor's administration when it was offered. "We gave oversight to the executive committees that were assigned to work with the respective departments within the city to get the status and goals for the mayor so he could further establish his plan," Green said.

Council members were notably impressed with Green's resume. "It looks like you're qualified to do just about anything," Councilwoman Margaret Barrett-Simon said.

After meticulously answering each of the council member's questions, Green was given a unanimous vote of approval from all seven city council members.

City Council President Charles Tillman, Ward 5, asked Green to point out his family and friends in the audience. Green said, "I'm not sure who out there isn't a friend"—to which Quentin Whitwell, Ward 1, laughed and replied, "Oh, you'll find out soon enough."

Lumumba's other recent hirings include Safiya Omari as chief of staff, Imhotep Alkebu-lan as the city attorney, Willie Bell as deputy director of public works and former teacher Derrick Trimble as an assistant to the mayor.

On the legislative side, Tillman has made his appointments for chair and vice chairwoman for each of the six council committees.

Tony Yarber, Ward 6, is heading up the Budget and Education/Youth Ad-Hoc Committees, and LaRita Cooper-Stokes, Ward 3, is now leading the Planning and Rules Committee. Margaret Barrett-Simon, Ward 7, is in charge of the Legislative Committee, and serves as the vice chairman on the Planning and Rules Committee. DeKeither Stamps, Ward 4, who is the only council member to serve on every committee, is head of the Economic Development Committee and vice-chairman of the Budget Committee. Quintin Whitwell, Ward 1, serves as vice chairman of the Legislative Committee.