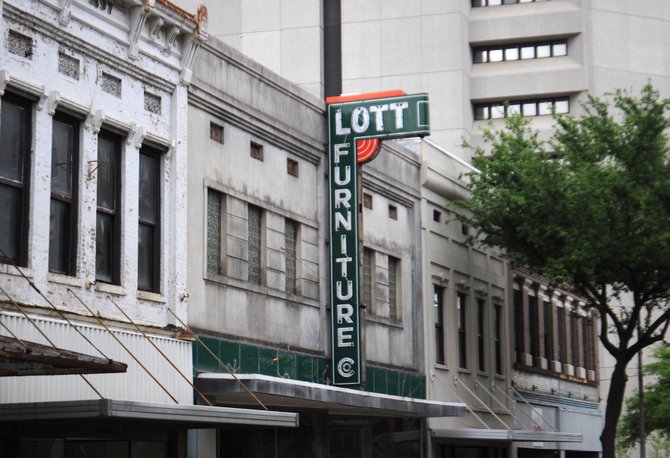 Lott Furniture Company is located at 216 W. Capitol St., across the street from the newly-revamped King Edward Hotel and less than a block in either direction from ground zero of Jackson's two biggest ongoing renovation projects: Farish Street and the two-waying of Capitol Street. Photo by Trip Burns

Scott Stringer is a co-owner at Lott Furniture Company on Capitol Street. He has a business to run and a budget to balance. Lately, the latter is proving a lot harder to do in the downtown area.

Stringer's store is located at 216 W. Capitol St., across the street from the newly revamped King Edward Hotel and less than a block in either direction from ground zero of Jackson's two biggest ongoing renovation projects: Farish Street and the two-waying of Capitol Street. As the city gears up to work on these projects, Stringer is struggling to keep afloat his furniture business, which has been in the same location since 1935.

"It's already killed our business," Stringer said. "(The city) completely closed down two of these three lanes out here for the first quarter of the year. That's usually our busiest. It's pretty much ruined any chance we had for a decent year."

The 13-year owner of the Jackson mainstay estimates his business has taken a 60-percent hit in business so far in 2013. After the lane closures, there was nowhere to park on the street, and the area sees little foot traffic, so window shoppers were scarce. The remainder of the block is slated for conversion into low-income artist's lofts and gallery space, which is bound to further affect foot traffic for some time.

Stringer said he called the city to voice his concerns, which prompted workers to move the orange barrels around to free up a single parking space. He would have sued the city for lost income, but understands the project is for the betterment of the city as a whole, and he says he has been advised against bringing a civil suit.

"We've probably stayed here longer than we should have," he said. "Not because of crime or anything else, it's because there's no retail traffic downtown. People don't shop downtown. They are building apartments left and right ... and I understand what they are doing, but there's nothing to keep (the tenants) here. I talked to a guy at the King Edward; he has to drive to (Interstate) 55 or Fortification (Street) just to get a gallon of milk."

The low commercial traffic and high taxes have combined to drive similar businesses out of downtown. If you look at the row of buildings in which Lott Furniture sits, seven of the eight storefronts are empty. On Monday morning, a utility vehicle surrounded by orange barrels blocked the lane that runs in front of Lott Furniture. Of the three pedestrians that walked by in an hour, two asked for change, and another spoke only to himself.

"The whole stigma of living downtown is (that) it's convenient, and you can walk here and there, but it's not convenient here," said Stringer, who estimated his small business pays upward of $30,000 in taxes annually. "I know they have visions of it being a Beale Street or something like that, and I don't know if I'm Negative Nelly or whatever, (but) I don't foresee us being here that much longer, because the retail traffic just isn't here."

Lott said he hasn't spoken to the mayor, nor has he met any of Jackson's mayoral candidates vying for the position in the May 7 municipal primary races.

The $10 million Capitol Street roadway project includes a makeover to the street's infrastructure, including the addition of four roundabouts, making the street run two ways, adding bike paths and beautifying the area.

Those efforts are being made, at least in part, to promote more pedestrian traffic and improve the business climate on Capitol Street. The underground work, which includes replacing out-dated water and sewer lines below the street, began in January. In Sunday's Clarion-Ledger, Jackson spokesman Chris Mims said the roadway project will begin in the "the next several weeks."

Former Jackson City Councilman and current Downtown Jackson Partners President Ben Allen told the Clarion-Ledger: "That $10 million will completely transform the street. When we did our survey, every single business along Capitol Street wanted to go forward with it. At the end, they'll be pleased with it."

No offense to Mr Stringer, but some advertising might be warranted. I've lived in Jackson for almost 7 years, and this is the first I've heard of a furniture store downtown. I guess I assumed it was closed like everything around it.

I also thought that Lott Furniture was closed. From the street it looks closed. The only thing I can say is wait and see how business goes at the Two Way Capitol project before closing

Honestly, I was surprised to hear it's still open, too.