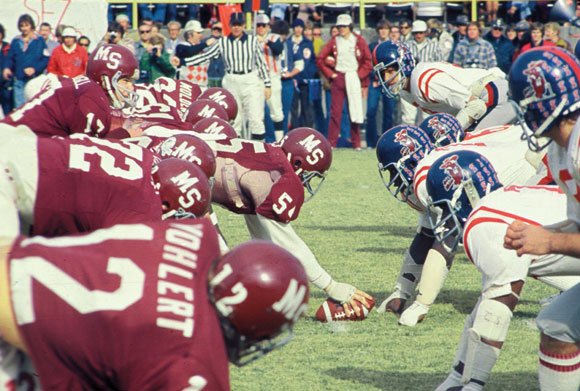 It has been nearly 10 years since two of the biggest rivals in this state played each other on Thanksgiving night. Mississippi State versus Ole Miss was a staple on Thanksgiving evening from 1998 to 2003. ESPN featured the Battle for the Golden Egg for six years, and Mississippians--and football fans nationwide--would settle in for the night after munching down their Thanksgiving feasts.

At the time, there were no NFL games or other nationally televised college games on Thanksgiving night. The Bulldogs and the Rebels had the whole country to themselves.

ESPN has traditionally used Thanksgiving night to showcase college-football rivalries from around the country, before conference realignment ended several long-established rivalries, such as Texas versus Texas A&M. The teams played Thanksgiving night in 2011 as the Longhorns defeated the Aggies 27-25.

In 2012, Texas A&M left for the SEC, so last year, Texas faced Texas Christian University (TCU) on Thanksgiving night in a game that hasn't reached rivalry status, yet. 2012 was the Horned Frogs first year in the Big 12.

The archrivals from Mississippi are back. Yesterday, ESPN announced that Ole Miss and Mississippi State will play their 2013 matchup on Nov. 28--Thanksgiving night. The Bulldogs and the Rebels will once again play for a national television audience that will have college football all to themselves. (The NFL will also have Thanksgiving game.)

The Egg Bowl is a nice recruiting tool for both schools. The game is a great way for the universities to showcase their programs and for Mississippi to show off in front of a national audience.

The Rebels and Bulldogs have played some memorable games on turkey day--when the ESPN series ended, both schools had each won three of the six games nationally televised.

The 1998 season was the first time Ole Miss and Mississippi State played on Thanksgiving night. MSU defeated the Rebels 28-6 to win the SEC West title and face national champion Tennessee in the SEC Championship Game. Coach Tommy Tuberville announced he was leaving the Ole Miss for Auburn the day after the Egg Bowl loss, making it even more painful for Rebel fans.

Perhaps the most memorable Thanksgiving match was in 1999. Mississippi State rallied from a 20-6 deficit to a 20-20 tie late in the fourth quarter. Ole Miss quarterback Romero Miller saw his late-game pass attempt deflected, setting up a 44-yard Scott Westerfield field goal to give the Bulldogs a 23-20 comeback win.

Ole Miss would get revenge a year later when the Rebels upset a ranked MSU team 45-30. The Bulldogs were unable to stop former Ole Miss running back Deuce McAllister (now with the New Orleans Saints). In the game, McAllister rushed for 121 yards on 24 carries while running for three touchdowns and throwing for another.