Curbing Murder in the Capital City 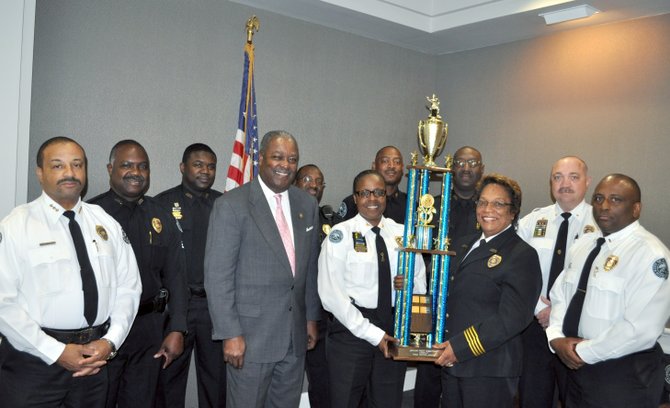 Mayor Harvey Johnson Jr. (fourth from left) and JPD Chief Rebecca Coleman (third from right) recently recognized the efforts of Precinct 1 cops to reduce crime in the first quarter of 2013. Photo by Chris Mims OR City of Jackson

During "Operation Bunny Hop," Jackson police teamed up with the Hinds County Sheriff's Department, the U.S. Marshals Taskforce and a narcotics unit and made 226 arrests in a three-day span from March 28 to March 30. Over the Easter weekend, the operation netted 14 felonies and 178 misdemeanors.

It's an impressive show of law enforcement, to be sure. But could large numbers of arrests be the magic bullet to bringing down Jackson's murder rate, which has climbed for three years in a row?

Statistics, and police spokesmen, say no.

When it comes to the mother of all violent crimes, Jackson has been steadily between approximately 30 to 60 murders a year for three decades. Federal Bureau of Investigation information shows the capital city has averaged just over 52 homicides a year since 1980 and, if the notorious "crack era" (from 1991 to 1995 during which Jackson averaged more than 80 murders annually) is removed, that number drops to just over 46. During that period, Jackson has had six mayors -- all of whom talked tough on curbing violent crime.

But preventing that type of crime is a tricky task, and a topic often-sensationalized in municipal races. The political tactic of preying on people's fears can be effective. The late Frank Melton rode scary crime numbers to a victory over current mayor Harvey Johnson, Jr.. in 2005 with promises to get it all taken care of in three to six months, depending on which speech you heard.

With non-violent crimes on the decline, Johnson has taken a more active role in recent months trying to curb the violent crime. In February, he announced a program that offers citizens a $500 reward for tips leading to the arrest of felons who own guns illegally.

But as Jackson Police Assistant Chief Lee Vance told WAPT news on Dec. 28, 2012, that violent crime, and murder in particular, are nearly impossible to stop without changing the hearts and minds of citizens.

"Well, basically, it's the same reasons that we had in recent years," Vance said when asked why homicides did not decline in 2012 over 2011. "That is, we have people in our city that get into conflicts, and they can't seem to find any other way to resolve those conflicts besides killing each other."

What the police can do is solve murders, which they did at a 65-percent clip in 2012, a full 15 percent higher than the national average of 50 percent, according to the same WAPT story. Vance explained that when it comes to preventing homicide, JPD is actually fighting a culture that leads to the killing.

"I know it's discouraging," he said. "It's troubling, but basically it's between people who have a beef (who) don't seem to find another way to resolve it other than shooting each other."

But according to leading 2013 mayoral candidates, there are ways to deal with the problem.

"There needs to be more leadership among young people," Quinn said. "Young people tend to follow other young people, and as mayor I would try to promote that ... Right now the kids with leadership skills are the ones leading our kids down paths we don't want them to go down. We need to have a youth summit where our church officials and teachers identify leaders in our community, young people, so we can have a leadership training seminar and teach them to be positive role models for their peers."

Although an earlier release from the Quinn campaign criticized Johnson for not doing enough to curb violent crime, she admitted any plan to achieve that goal would take years to take effect.

"When it comes to drugs, we won't be able to save them all, but we can do more to help the people on the street who are addicted," Quinn said.

"I know there is more we can do as far as grants and opportunities to create programs. Another thing we need to be very visible and have a police force that is using all the latest technology and do some creative crime fighting. I know we need to get guns off the street. The approach would be one of putting people around the table who have been experts in the field, people who have had success taking on tasks like this in other places, and let's be about getting it done."

Ward 2 City Councilman Chokwe Lumumba, a former defense attorney and current mayoral candidate, has a different take. He said bringing jobs to Jackson is the surest way to deter crime by providing an alternate means to make ends meet for would-be criminals.

"I'm in a unique position to understand people who have problems, and people are marginal as far as crime is concerned," Lumumba said in an interview with the JFP. "Our attack on them has to be get them a job, to re-orient their values. You've got to reduce the pool of people who might become criminals ... that's going to be a joint effort with churches, people like me who ran basketball programs.

"... [W]e have to say to those who continue to commit crimes that we're going to sit down at this table and make a promise: You're going to stop committing crimes, and I'm going to try my damnedest to get you a job, to create programs to get jobs, to encourage businesses to drop the "misdemeanor box" so you don't get dropped from the job because you have to check off that you've been convicted of a misdemeanor. What your promise is going to be is you're going to get out of the drug game, you're not going to break into people's homes. If you do that, you've breached our promise."

Businessman Jonathan Lee, another mayoral hopeful, doesn't claim to have all the answers, but said he thinks the mayor can use the bully pulpit to work with the school district to positively effect the lives of students and curb the high school dropout rate.

"There are no silver bullets," Lee said. "I don't have a single silver bullet in my pocket. I think that's important to say when we are discussing a subject as emotional as crime. There are so many fronts that we have to work on to create an environment where people are happy and aren't as stressed. That quality-of-life peace is not as black and white as a crime statistic, but it is certainly a big part of the equation. ... How can we make sure our citizens have access to great jobs, making sure our kids have a pleasant experience in the schools system, but also get the tools they need to succeed in the workplace."

Lee added that JPD morale is low, but could be improved with common-sense solutions like added incentives for officers with higher education credentials and added benefits for officers.

"We have such an issue with the morale among our police officers and our ability to hang on to them is not very good," Lee said. "If we can improve our revenue (by seizing illegal drugs and contraband), we can offset some of the costs of things we'd like to go back to doing: for example, the police car take-home policy. If you are a beat cop, and you live in Jackson, I want you to take your car home. There's empirical evidence out there that shows the equipment lasts longer, and we want those cars to go home with the officer. Not only for their morale but for the neighbors who want to see those cars parked outside their houses as a crime deterrent."

Ward 5 Councilman Frank Bluntson said officer morale is the real issue, and recalled a story of a police officer, who Bluntson declined to identify, who had his shift changed because he was accused of having an altercation with a drug dealer.

"I feel that crimes are being committed because the officers are afraid to get out there and do their jobs," Bluntson said. "They get called in for every little thing and get suspended."

Read what other mayoral candidates say about crime at jfp.ms/mayorsrace2013. Email Tyler at [email protected].

My input on crime in Jackson is that most of the time you have to start with the top (Jackson Police Department) then work your way down (Jackson communities). Jackson Police Department needs to be cleaned of it's dirty cops and then tackle the mind set of the community. A police mingle with the community event needs to take place every so often that way most people will have better communication with the officers that patrol their neighborhoods. Some youths do not need to be locked up but need to be sent to get mental help. More jobs will curb crime for some citizens who wants to do the right thing but there is still a high percentage of citizen who doesn't want to do the right thing. When officers see a youth going down the wrong road I think a sit down with parents need to take place also this is where the church leader can aid in doing. Also, Jackson school system can help in many ways to assist students when they are traveling that wrong road.

swalker, I agree that corrupt cops (and public officials) need to be sent home or to jail, but you don't just start there. It's not enough, without full community engagement. Frankly, we've had a situation for many years in Jackson where many citizens are happy to go along with corruption on higher levels than just a police officer if it benefitted them in some way (such as got a police record cleaned).

Police simply aren't the answer to lowering crime, although they play a role just like everyone else. If we don't simultaneously tackle the root causes of crime, it's like removing broken chairs from the Titanic.

"Right now the kids with leadership skills are the ones leading our kids down paths we don't want them to go down".

This is the MOST IRRESPONSIBLE comment I have heard from any of the mayoral candidates to date.

I think she's right. She isn't blaming kids for our problems, she was making a point that we need to target youth who show leadership skills and get them involved in the community early. I think we can all agree that's a good idea.

@tyler.cleveland ) "I think she's right. She isn't blaming kids for our problems, she was making a point that we need to target youth who show leadership skills and get them innvolved in the community early. I think we can all agree that's a good idea."

I must ask if English is a second language for you or Mrs. Quinn? I am a reader of this site, not a mind reader. What we can "all agree" on is that she was quoted in this article as saying, "Right now the kids with leadership skills are the ones leading our kids down paths we don't want them to go down."

This community is looking for leaders with integrity and truth: Not just short sound bites and information based on untruths. Voters are smarter than you think!

With all due respect, I think you are misunderstanding what she was saying.