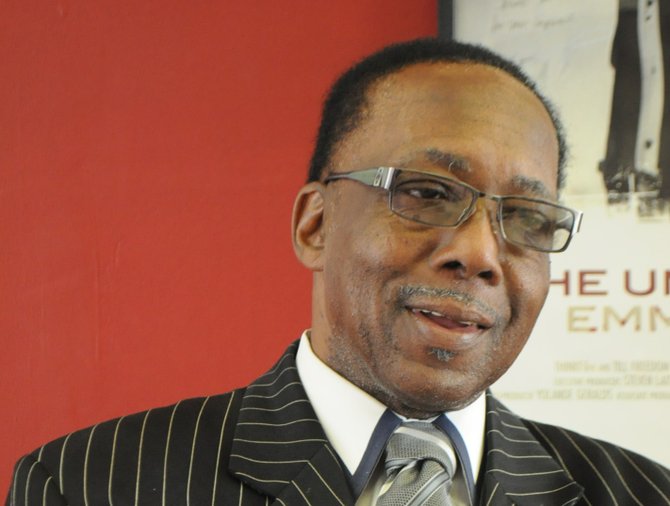 Rev. Barron Banks brings a lifetime of experience to the table as he runs for the city council seat for Ward 4. Photo by Trip Burns. 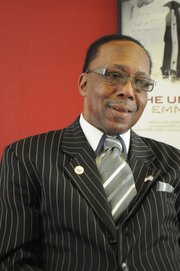 When Barron Banks turned 18, he registered to vote. When he tried to exercise that right in 1964, it took federal marshals accompanying him to the polls.

Now, the 65-year-old pastor is asking the next generation of Jacksonians to exercise that same right and elect him as city councilman for Ward 4.

Banks has deep Jackson State University roots. He graduated in 1969 with a degree in social science before heading to Mississippi State University to seek a master's degree. Just 31 hours short of achieving that goal, Banks got a scholarship to attend the prestigious University of Pittsburgh School of Divinity, and he took that opportunity.

After getting his master's of divinity, Banks returned to the Magnolia State. Since then, he's been a man of many hats.

The Tchula native has served as national chaplain for the Jackson State Alumni Association, the reverend of New Hope Baptist Church in Meridian, a coordinator of several faith-based community outreach programs and an adjunct professor of history and philosophy at Jackson State. Mayor Harvey Johnson Jr. appointed Banks to the city planning board during the mayor's first term and has served in that capacity ever since.

Now, the reverend and civil servant is asking the people of Ward 4 to allow him to serve them as city councilman.

City infrastructure has been a hot issue lately. What would be your plan to fix our streets and water distribution system?

It's not going to be easy to have community development, city development and economic development with our poor infrastructure. ... People want to come somewhere where the streets are drivable; they want to set up nice restaurants where the customers can get to them. I've been on the planning board for nine years. I was appointed by Mayor Johnson. When it comes to voting down a little pawn-shop, I do that. We don't need too many gas stations on the same block. We don't want these businesses coming in and opening, not having enough money coming in, and then they go out of business, and their vacant building is another blight on the community. ... So let's sit down together and see if all of the wards can come together and build something together. If we're going to bring in development like Farish Street and a downtown arena, let's do that. But we have to do things that are going to create revenue for us to fix our streets and our pipes.

Which of these development projects do you think is most important, and can we really focus on them if we can't afford to fix our infrastructure?

If the arena and the lake and all those things are going to bring in the funds where we can deal with infrastructure and schools, then great. That's when we have to come together and sit down and talk about these things. We need to talk to our business leaders and ask them what they need, and talk to these investors looking to put money behind these development projects and see what it will take. If there's enough money behind them, and we can start to meet some of these challenges we face while taking on these big projects, then I'm all for it. But we have to sit down with all of our leaders and develop the best strategic plan going forward to meet our needs and be ambitious at the same time.

Can you talk about Jackson's crime problem and what can be done about it?

I think Jackson has a crime problem. I think, like any other city that has its problems with crime, it can be dealt with. When you have a lack of parenting and training, where there needs to be more education on parenting for young people, then it's wide open for crime. ... I would have to say yes, we have a crime problem, but there are ways to deal with it by involving the community and teaching kids the value of ethics and staying in school. We have a bad dropout rate, which opens the door to more crime. But we need to get our churches involved and help parents understand what it takes to raise a child. I don't even want to talk about it, but I have visited our detention centers, and there's just no reason to have 12 young men between the ages of 15 and 17 locked up for murder and kidnapping. The perception in some areas, some more than others, is bad, but we can't start dividing the city up. One place is not that far from another.

Is the crime problem tied to economics?


Of course. One of my focuses on my push-card is helping to build stronger families and stronger communities through public safety. We won't build those things through jobs alone. I don't want to start talking about the difference between Madison and Rankin Counties and Hinds County, but let me say that again: I want to build stronger families and safer communities through public safety, education and jobs. To just deal with one of those, we're still going to have problems. We can have people educated through Jackson State (University), Millsaps (College) and Belhaven (University), but if the jobs aren't there, we're still going to have problems—jobs, education and public safety work hand-in-hand.

We need our elected leaders in the state House of Representatives and state Senate to come together with the mayor's office and the city council and be united in this effort, but you are going to know where Barron Banks stands whether those people come around or not. I think that's something I can do that maybe my opponents can't. And I respect my opponents a lot, but I bring the ability to bring people together and come to a consensus.

What is it going to take for Jackson Public Schools to reverse the trend of rising dropout rates and poor test scores?

From the heart, let me say this: Council members who don't have kids in the public school system need to act like they do. I volunteered for three months during the football season at Chastain Middle School. I traveled with them on the bus to all of their football games. The city council and all our city leaders need to really focus in on how we can get together with council members to find some superintendent candidates who can improve our school system. If we can't do that, then we need to let the people elect these leaders in education. I see us having meetings and appointing board members and hiring principals. What I don't see is anyone trying to improve the self-esteem of these students. We may have poor test grades, but if we tested them for self-esteem, I guarantee you it wouldn't be there. If the self-esteem isn't there, the grades aren't going to be there.

So once again, we need to come together with our business community, our government officials and our church communities and let them know we need to reinvest in our educational system. We need to let people see that from the outside, too. Businesses don't want to come into a community with lower-graded schools. We need to be talking about this before we hear that our test grades are low. We are more intelligent than that.

What changes would you like to see specifically in Ward 4?

With the redistricting, Ward 4 is not the south side anymore. The answer I'm going to give now would have been different six or seven years ago. We need places for businesses to flourish along the Highway 18 corridor and Highway 80 corridor. But now since we're now from Timberlawn on to Queens and Flag Chapel, we have to make some changes. We need to enforce some business ethics and make our streets safe. We have gas stations that people are afraid to pull up to at night. We need to clean up what we have. Tear down some things that need to be torn down. It's probably worse on the west side than it is on the south side. We need to tear down, and build up. Tear down, and build up. Community policing is going to have to pick up, both from the sheriff's department and JPD. They have to work hand-in-hand. Around Forest Hill High School, Wingfield High School, we have to pick up. We don't need our kids walking past abandoned buildings on the way to school. It has to start today. That's why you see "Right now" on my push cards.

What do you think needs to happen with Metrocenter Mall? Can it come back?


Ward 4 and 5 come close together at the Metrocenter. I'm hearing that retail similar to the medical mall—again, I don't want to say tear down and build up, but if our planning is right, if the medical mall (at Metrocenter) is not going to be a major site for other businesses to come in, then we have to change it quick. Let's not do it steady; let's change. One store, and that's Burlington that I can see. I say yes, we're going to have to change that whole idea and find something that is going to bring in more business.

Have you picked a candidate in the mayor's race?

I'm praying hard. I, too, as a pastor, have been very community oriented. The mayor candidate who is not going to focus just on political maneuvering—I'm going to be with that person. I don't even have a political platform, I have an action plan and vision, and I want to work with other people to get that vision done.

How can we retain college graduates and keep them from leaving for bigger cities?

Dallas, Texas, gets a great number of our students. I can't speak for the other schools, but I know they recruit very well at Jackson State. … Our placement offices are going to have to do a better job of tracking for businesses here in Jackson. We can do a better job of placing our students, and it has to start when the student is about a sophomore. When I went to Pittsburgh Seminary, I knew where I would be pastoring six months before I graduated. …

We probably need to look at more performing arts in this area. My son graduated in music industry from (Southern Miss) because they didn't offer that at Jackson State. I just talked to (blues performer) Bobby Rush a few minutes ago, and I said, "Bobby, we've got to do something about this." I want to help as many people graduate from these Mississippi schools as we can, and then get them to stay in Jackson. We know where these kids are going to be academically early on, and we need to create opportunities for them right here in Jackson.