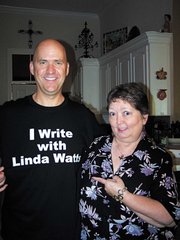 I met Linda Dendy Watts three years ago at Hal & Mal's (200 S. Commerce St.) when friends gathered there to host a benefit for her. Linda had been diagnosed with kidney cancer, and community and family came together to help and support her. Former Hal & Mal's manager Charly Abraham had just asked if I was interested in hosting singer/songwriters night there, and when my musician friends mentioned that Linda was a former singer/songwriter-night hostess in Nashville and Jackson, I immediately sought her out, asking a thousand questions at lightning speed.

From that night on, Linda became my mentor, not only with hosting the event at Hal and Mal's, but also giving me advice about dealing with difficult musicians, performing live, songwriting and sometimes even love advice. She helped me immensely with getting singers/songwriters night off the ground, she would always have a smile on her face, and would even keep you smiling with her quick wit and humor.

She was an avid music supporter, and she would often come out to hear what I like to call my "Mississippi homemade musicians" at singers/songwriters night. I would also see her out supporting other musicians, such as Hunter Gibson and The Gators, Wyatt Waters and Scott Albert Johnson, just to name a few. And while friends reminisce that Linda loved The Beatles and Dan Fogelberg, her true favorite musicians were right here in Jackson and throughout the state. At one time she had pictures of all the local bands she loved hanging up on her walls at her home.

Linda was also a talented songwriter in her own right. She was a featured writer for MOJO magazine, and was president of the Jackson chapter of the Nashville Songwriters Association International. She shared many stories with me about attending The Bluebird Café and hearing all the incredible musicians who had performed there. She also shared that she enjoyed writing songs with Hunter and was not only a fan of his, but also a dear friend. When she wasn't writing songs, she worked at the University of Mississippi Medical Center as an office manager, and also worked at The Education Center.

On Sept. 3, Linda lost her battle with kidney cancer. When I think of those that support Jackson's music scene, Linda Watts was at the top. She was the epitome of class and encouragement to all musicians. She played an integral part in the singer/songwriter movement here in Jackson, and several bands were formed from her hosting events for musicians in Jackson years ago. She enjoyed all types of music and was genuinely passionate about music. She supported all musicians in the City with Soul, even if the cancer treatments kept her home on the nights her friends would play.

Linda encouraged me to continue hosting, continue writing, continue singing and to never give up on what my real passion was in life. She also encouraged women to get out there and perform their songs to the public. One of the quotes on her Facebook page totally describes who Linda Watts was during her time here on Earth: "Well-behaved women rarely make history."

I wish we had more people here and everywhere that supported local music like Linda did. I will miss seeing her at shows and concerts. I will miss her sweet, hilarious remarks on my Facebook posts, and I know she will be terribly missed by her friends, family and musicians from all around. Rest in peace, sweet friend.

Correction: An earlier version of this story incorrectly stated that MOJO magazine was based in the UK. It was based in Mississippi. The Jackson Free Press apologizes for the error.