A 'Big Menu' for Blues Fans 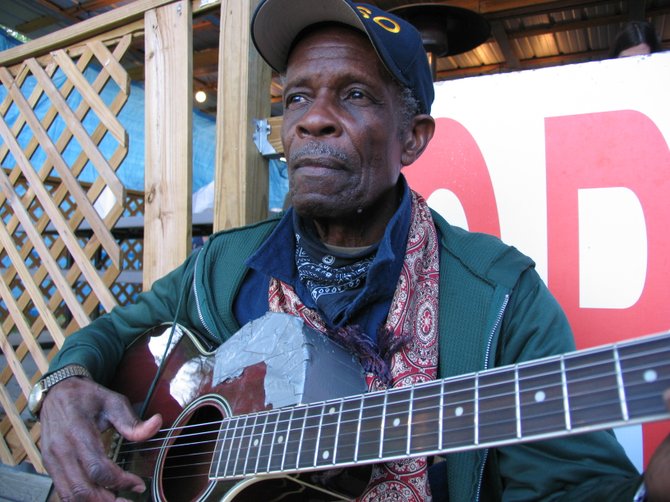 Blues in the Delta is still alive, and now it's getting organized. Over the past 10 years, the promotion of blues in the region has grown, including new museums and festivals.

These groups are working together on "Bridging the Blues," a new effort to encourage blues fans to extend their visit in the area. From Sept. 27 through Oct. 8, communities across the Delta will host a series of concerts, festivals and other programs focused on the music.

The project developed from a change of date. The producers of Leland's Highway 61 Blues Festival decided to move their event from mid-June to the last weekend of September.

They made the change hoping to attract blues fans who would be in the region on the first weekend of October for the King Biscuit Blues Festival, an internationally renowned event based in Helena, Ark.

"A lot of blues fans who come to the region for multiple days will plan their trip around a large festival like King Biscuit," explains Scott Barretta, an Oxford-based blues writer and adviser to "Bridging the Blues."

Seeing the potential to create a "bridge" between the two weekend festivals with more programming, tourism groups from Mississippi, Arkansas and Tennessee came together and encouraged Delta communities to offer blues-related events during the period.

The program schedule has more than 50 events taking place from Memphis to Vicksburg, including concerts, exhibits, festivals and book signings.

The series kicks off Sept. 27 with Jackson blues artist Stevie J performing at the Ameristar Casino in Vicksburg, followed the next evening with a show by Bobby Rush at Club Ebony in Indianola. Barretta notes the important role the club has played in the musical history of the Delta.

"It's one of the last major chitlin circuit clubs that's still in operation," he explains. Barretta also points out Club Ebony's intimate feel, something missing from blues shows that are staged at larger venues.

"When you're at a show at Club Ebony, the people are right there [next to the performer]," he explains. "A lot of the importance in blues is placed on the call-and-response between the performer and the audience."

The first "anchor" event in the series, the Highway 61 Blues Festival, takes place in Leland on Saturday, Sept. 29. The festival focuses on promoting musicians from the mid-Delta. Featured performers from the area include Eddie Cusic, John Horton and Mickey Rogers. Joining them will be fellow Mississippi musicians L.C. Ulmer and Jimmy "Duck" Holmes, among many others.

The Holly Ridge Jam, an informal jam session featuring local blues musicians is held the following day at the Holly Ridge Store outside Leland. Barretta believes this event is a great place to pick up on the Delta vibe.

"It's a change of pace from the festival; there's no structure to it," he explains. "You never know exactly what's going to happen, but there's a real sense of community among the performers."

While the larger events take place over the two weekends, a number of special programs are being held during the week. These include a tour on Oct. 2 of the historic Dockery Farms plantation outside Cleveland and an exhibition of blues photography by folklorist and Mississippi native Bill Ferris at the E.E. Bass Cultural Center in Greenville.

"Bridging the Blues" hits its high point Oct. 4 to 6 at the King Biscuit Festival in Helena. One of the most highly regarded blues festivals in the U.S., the "Biscuit" features the stars of the blues (this year's headliners include Bonnie Raitt and Taj Mahal) as well as notable regional performers.

The celebration winds down Sunday, Oct. 7, with Clarksdale's Cat Head Mini Blues Festival and the Pinetop Perkins Homecoming at the Hopson Plantation. Barretta sees "Bridging the Blues" as a great opportunity for blues lovers to have a deep Delta experience.

"For blues fans who are thinking about coming to the region, 'Bridging the Blues' has a big menu from which they can pick and choose," he states. "This is a great time to visit the Delta. The weather's going to be good and there will be lots to do."

To view the full schedule for "Bridging the Blues" visit bridgingtheblues.blogspot.com.