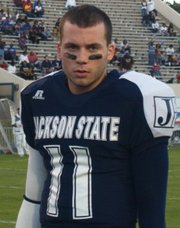 Jackson State University quarterback Clayton Moore put on one of the most outstanding performances of the young college football season last Saturday. The Tigers needed a win after starting the season 0-2 with losses to Mississippi State and Tennessee State.

The Tigers' goal of winning the east division was not harmed with its opening losses because their opponents were not part of Southwestern Athletic Conference. Jackson State entered SWAC play against Texas Southern.

Moore led the Tigers to a 45-35 victory over TSU, while passing for three touchdowns and rushing for another three touchdowns. After trailing 7-0 in the first quarter, Moore leveled the game with a 1-yard pass to Rico Richardson.

Richardson caught a 44-yard pass from Moore to tie the game at 14-14 in the middle of the second quarter. At halftime, JSU trailed Texas Southern 21-14.

Moore turned the game around in JSU's favor in the third quarter, when the Tigers outscored TSU 17-0. The Tigers quarterback scored on a 1-yard run and a 3-yard run, with a 27-yard field goal by Ryan Deising sandwiched between the two scores.

JSU led 31-28 at the end of the third quarter. The fourth quarter saw Texas Southern try to mount a comeback, briefly taking a 35-31 lead with more than nine minutes left in the game.

Moore scored on a 5-yard touchdown run to give JSU a 38-35 lead that clinched the win for the Tigers. Richardson caught his third touchdown of the game on a 25-yard pass from Moore to sweeten the victory for Jackson State.

The JSU quarterback threw for 363 yards while completing 18 of 36 passes with three touchdowns. Moore also led the Tigers in rushing with 101 yards on 21 carries, adding four more scores on the ground.

The victory moved Jackson State to 1-0 in SWAC play.

For the season, Moore has thrown for 564 yards with three touchdowns and one interception. He has also added 146 rushing yards through three games.

Moore and the Tigers face Southern University this Saturday in Jackson State's 2012 home opener. The game will be played at Veterans Memorial Stadium at 4 p.m.