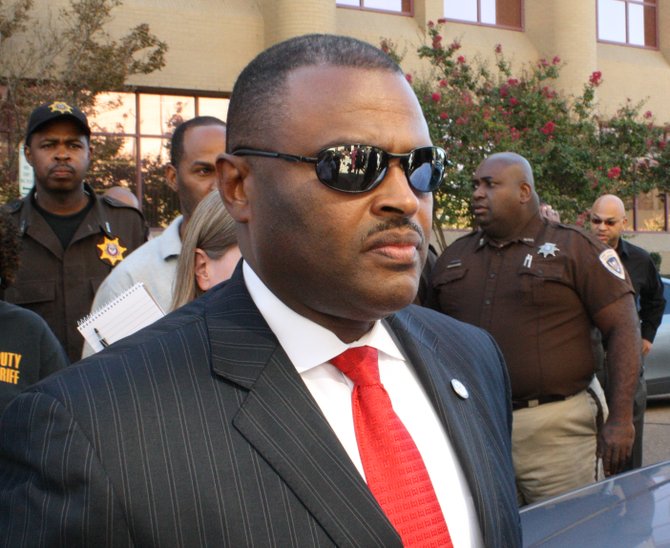 The Hinds County Sheriff's Department won't get a budget cut after all.

County supervisors called a special meeting today to discuss repealing the $2.5 million cut to the department's budget the board passed Sept. 4. The repeal passed at the meeting.

More than 60 sheriff's deputies made up much of the crowd of 200 who gathered in the Board of Supervisors' chambers and the halls outside to listen to the meeting. Sheriff Tyrone Lewis said he did not order the officers to attend.

District 5 Supervisor Kenneth Stokes and District 4's Phil Fisher supported the budget cut, which Stokes proposed to fund raises for all county employees, including those in the sheriff's department, and add to the county's cash reserves.

Repealing the cut was important to help keep the citizens of Hinds County safe, Lewis said.

"Yes, we need a raise, but we need a raise the right way, not at the sacrifice of your sons and daughters walking to school being molested or attacked by individuals when they know that the budget has been cut for public safety," Lewis told his deputies after the meeting. "Not at the risk of your mothers, your wives, your grandparents going to the grocery store to shop, and not able to go out and put their groceries in the car without feeling safe."

Fisher said there are clear inequities with how payroll is distributed in more than one county department, which the board must deal with.

"We've got people who just joined the county who are doing administration, secretaries making $52,000 a year, and we've got jailers making $1,818 a month," Fisher said. "We've got sheriff's investigators who are new coming in making $3,600 a month, and ones who've been here for years making $2,500."

Fisher cited a crumbling infrastructure, among other issues, as a major reason the budget cut is needed. At the current rate, Fisher said, the county will repave individual roads once every 125 years.

"You can see that our budget is strained beyond its capabilities," Fisher said during the meeting.

District 3 Supervisor Peggy Calhoun said the $500,000 Stokes proposed to put toward street resurfacing will only repave about 12 miles of roads. The negative effect of that money not going to the sheriff's department would far outweigh 12 miles of repaved roads, she said.

The county has three options to remedy their budget woes, Fisher said. First, it can raise taxes. Second, it can depend on economic development, a long-term step and that will take years to generate revenue. Third, it can rearrange money within the budget. The third option is what he and Stokes were trying to do, Fisher said.