Not Just a Country Picker 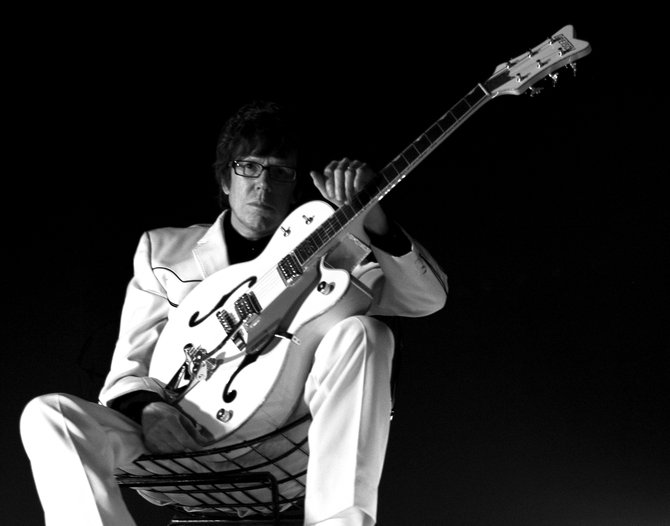 Guitarist Kenny Vaughan is best known for his work with Mississippi country star Marty Stuart, but his playing is built on a wide range of musical experiences. Photo by Courtesy Sugar Hill Records

Kenny Vaughan plays country music, but his influences and experiences stretch across the spectrum of American musical culture. The Nashville-based guitarist and country-music star is best known for his work in the Fabulous Superlatives, the backing group for Mississippi native Marty Stuart. However, his musical upbringing exposed him to multiple styles that continue to inform his playing today.

Vaughan grew up in Denver in a house filled with music. His father had a large jazz record collection and kept it in steady rotation. As a teenager, Vaughan went to rock concerts, started a band and took guitar lessons from a young Bill Frisell, now a highly regarded jazz guitarist. He also listened to country music, although he wasn’t aware of it at the time.

“I was a Johnny Cash fan, but I didn’t know that he was a country singer,” Vaughan recalls. “His records were played on the same radio stations that played The Beatles and The Rolling Stones.”

In his 20s, Vaughan formed The Jonny 3, a punk band that developed a following in Denver and toured throughout the country. At the same time, the guitarist earned his living playing music in a very different situation.

“I worked at a local honky-tonk bar, playing ’50s and ’60s country music six or seven nights a week,” he remembers. “I played with guys in their 50s. They were playing music that hadn’t been on the radio for 10 or 15 years. It was like walking back in time.”

Vaughan made use of this experience when he moved to Nashville in 1987 to play with the group Sweethearts of the Rodeo. He quickly made connections and continued working with other artists, including Rodney Crowell, Kim Richey and Lucinda Williams. Vaughan spent three years touring with Williams following the release of her acclaimed album “Car Wheels on a Gravel Road.”

After leaving Williams’ group, the guitarist connected with Marty Stuart, a native of Neshoba County, who was putting together a new band. Vaughan has been a member of Stuart’s group since 2001, referring to it as “the greatest gig ever.” It also remains a constant musical challenge.

“We have over 200 songs,” he explains. “There’s no setlist; we just go up and wing it. Every night I feel like I’ve got to be at the top of my game to keep up with those guys.”

One of the most unique aspects of Vaughan’s duties with the band is working on Stuart’s television show. “The Marty Stuart Show” features Stuart and the group as well as performances by guest stars like Lyle Lovett and Loretta Lynn. Currently in its fourth season on the cable channel RFD-TV, the show has helped Stuart and the band find new audiences.

“It took a while for it to catch on,” Vaughan says. “It’s a small network, and a lot of people don’t have it. But it has a huge audience. We’ll be playing somewhere, and Marty will say, ‘How many of y’all have RFD-TV?,’ and 60 to 70 percent of the audience will cheer.”

In addition to working with Stuart, Vaughan keeps a busy schedule as a studio musician. He also writes and records his own music—he released his first solo album, “V,” last year—and leads a trio that includes Jeffrey Clemens (drummer for G Love and Special Sauce) and Dave Roe (who was Johnny Cash’s longtime bassist). The group plays every Monday night at a neighborhood bar.

“It’s an under-the-radar gig that mostly draws musicians,” Vaughan says. “We have some monster guitar players sit in, but we play very quietly, so it’s not your typical ‘guitar hero’ kind of thing. It’s a bit more quirky and musical.”