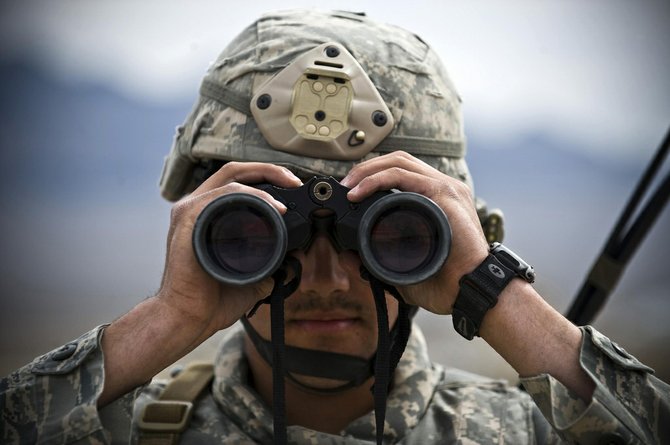 The Republican and Democratic candidates will square off tonight on foreign policy, including current and potential military actions in the Middle East. Photo by Courtesy Flickr/DVIDSHUB

Tonight, the presidential candidates from the Republican and Democratic parties will get together to bicker over our nation's foreign policy, issues that frequently take a back seat to domestic issues this election season.

President Barack Obama will certainly take every chance offered to highlight the killing of Osama Bin Laden on May 2, 2011, and the end of the Iraq war last December.

The president has also laid out a plan to gradually get U.S. troops out of Afghanistan and end the war there in 2014.

Republican candidate Mitt Romney has changed his stance on nearly every major issue in the campaign, besides military policy. He has made it clear all along that he supports a large, powerful and expensive military and a strong troop presence overseas, especially in the Middle East. His camp has made it a point during this campaign to say that the president is weakening the nation by pulling troops out of Iraq, setting a date to get troops out of Afghanistan and choosing not to take broader military action in Iran and Libya.

"In Iraq, the costly gains made by our troops are being eroded by rising violence, a resurgent Al-Qaeda, the weakening of democracy in Baghdad and the rising influence of Iran," Romney said during a speech at the Virginia Military Institute Oct. 8. "And yet, America's ability to influence events for the better in Iraq has been undermined by the abrupt withdrawal of our entire troop presence. The president tried—and failed—to secure a responsible and gradual drawdown that would have better secured our gains."

While the Obama campaign has focused on the nation's victories, particularly the death of Osama Bin Laden, and withdrawals of troops from overseas warfare, Romney has chosen to use the language of fear to make a smaller foreign military presence and less intervention seem like weakness.

Both Romney and vice-presidential nominee Paul Ryan have spoken of Iran's nuclear capabilities on the campaign trail. During the vice presidential debate, Ryan claimed that Iran is "four years closer" to having a nuclear weapon, a fact Vice President Joe Biden quickly disputed. Biden said even if Iran had the raw material needed to make the weapon, the country still does not have the capability to build a bomb to house the nuclear material.

It seems clear that Romney would not hesitate, if elected, to send the nation head-first into another full-fledged war in Iran over the threat of weapons that don't yet exist, much like his Republican predecessor did in Iraq.

"I will put the leaders of Iran on notice that the United States and our friends and allies will prevent them from acquiring nuclear weapons capability," Romney said during his speech at VMI. "I will not hesitate to impose new sanctions on Iran and will tighten the sanctions we currently have. I will restore the permanent presence of aircraft-carrier task forces in both the Eastern Mediterranean and the Gulf region—and work with Israel to increase our military assistance and coordination. For the sake of peace, we must make clear to Iran through actions—not just words—that their nuclear pursuit will not be tolerated."

At the Democratic National Convention, Obama spoke of diplomatic answers to Iran's attempts at creating a nuclear weapon. He said a strong leader talks to his adversaries.

"We shouldn't be afraid. You know, Iran spends one hundredth of what we spend on the military," Obama said at the convention. "If Iran ever posed a serious threat to us, they wouldn't stand a chance. And we should use that position of strength that we have to be bold enough to go ahead and listen. That doesn't mean we agree with them on everything. We might not compromise on any issues. But at least we should find out are there areas of potential common interest, and we can reduce some of the tensions that have caused us so many problems around the world."

Tonight, Romney and Obama will square off on these and other foreign policy issues at 8 p.m. central standard time. "Face the Nation" host Bob Schieffer will moderate the debate at Lynn University in Boca Raton, Fla. Check your local TV and radio listings for channels.

Romney has no coherent foreign policy, so far as I can tell. Instead, it's just opportunism run amok. Just look at this mess:

"I will not hesitate to impose new sanctions on Iran and will tighten the sanctions we currently have. I will restore the permanent presence of aircraft-carrier task forces in both the Eastern Mediterranean and the Gulf region—and work with Israel to increase our military assistance and coordination. For the sake of peace, we must make clear to Iran through actions—not just words—that their nuclear pursuit will not be tolerated."

Everything in that paragraph is either deceptive or trivial. Obama has already implemented the tightest sanctions that have ever been imposed on Iran, or any other country for that matter. Just in the last year, five different aircraft carrier groups have deployed to the region, and at least two have been in the theater at all times. That doesn't include all the air power we have based in Qatar. Israeli Defense Minister Ehud Barak says that military assistance and coordination have never been tighter. The Obama Administration has made it abundantly clear that it will not "tolerate" a nuclear Iran and is prepared to attack if necessary.

Romney doesn't offer real policy alternatives, beyond $2 trillion more in defense spending. All he has is rhetoric and chicken-hawk tough-guy talk. The clothes have no emperor.