AG's Office to Xerox: Back Off 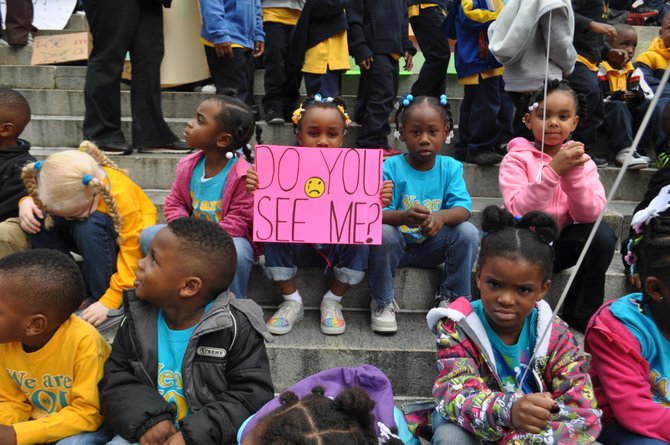 The Mississippi attorney general's office has intervened on behalf of child-care providers who say they've been receiving harassing phone calls from Xerox, the mega-company that has the agreement to run the state's childcare payment and tracking system, a story the Jackson Free Press broke recently.

Since the Department of Human Services launched a pilot program in September requiring recipients of low-income child-care vouchers to scan their finger when dropping off or picking up a child, child-care operators have lodged numerous complaints.

Currently, 20 centers in Hinds, Rankin and Madison counties are participating in a pilot program to give the machines a trial run before they're rolled out in more centers around the state.

Xerox sent a letter to child-care providers in late July announcing the new child-care time and attendance program. The letter states that the new program requires the installation of new equipment, which comes at no cost to the provider. Also included in the 15-page packet were a provider agreement, a federal W-9 request for taxpayer-identification number form and a settlement authorization form.

Several operators testified that Xerox representatives have repeatedly called in recent weeks, telling providers they must sign and return the contract or they wouldn't continue getting paid. Earlier in the day, providers held a rally at the capitol to reject the Xerox contracts with chants of "Ban the Scan."

Jill Dent, director of DHS' Office for Children and Youth, ran the meeting. Dent did not answer questions or engage directly with speakers, but did address what she characterized as misconceptions about the program.

Dent explained that the Xerox machines do not capture fingerprints, but rather convert the finger images into a unique code that is associated with the parent or guardian's Social Security number. She also clarified that changes to the provider payment system would not result from the introduction of the scanners.

Dent told the Jackson Free Press recently that DHS is introducing new technology in phases that will help pare down the list of more than 8,000 children waiting for subsidy assistance. However, providers questioned Dent why the agency did not spend the $1.6 million used to purchase scanners to take kids off the waiting list.

Furthermore, providers called the scanners excessive government regulation. In addition to added costs of dedicating staff to oversee the machines, providers says the machines are full of glitches and discriminate about poor parents who receive child-care assistance. Parents who do not receive the subsidy are not required to scan in and out.

Also, because Xerox requires providers to have a dedicated land line for the hardware and submit voided checks in order to be reimbursed, providers also believe the program discriminates against some child-care center operators as well.

Jane Boykin, with Delta Licensed Providers, noted at a public hearing held yesterday at Mississippi Public Broadcasting auditorium in Jackson that many providers are African American and lack bank accounts.

"That is totally discriminatory on its face and in practice," Boykin said of the requirements.

The fingerprints are connected to SS numbers? Have ever heard of fraud? And, what about all the other people who sometimes pick up children? You will need to have every approved person go to an office and give a fingerprint. What a mess!

But if it prevents one, just one, case of kidnapping or child abuse or fraud it will have been entirely worth it.

Darryl, good point. That's the exact same logic that people use for gun regulation, by the way.

Ms. Ladd, I'm all for it! Fingerprint me (oops, too late...already in database) and regulate the hell out of gun ownership. And woe betide those for whom are not registered (20 years minimum) and make it as onerous as all hell to legally obtain a firearm. But, for those of us who jumped through the hoops and are responsible...back off.

Donna- Those people are using flawed logic too because it can be applied to any way someone is injured or killed. Hundreds of people die every year in the bathtub, so using that logic bathtubs need to regulated or banned because it would save one life and be worth it.

Actually, I haven't really argued for anything more specifically than you're saying there on gun regulation--but you are definitely more liberal than a lot of gun folks based on that comment.

Would you apply the same standard for parents who have no record of irresponsible behavior?

Of course, there is the problem that "responsible" gun owners commit crimes and suicides with guns--so I'm not sure how that circles back to your original logic that if it saves one life (or child), then we need a blanket regulation.

I'm not taking a position on the finger scanning, by the way: I can see it from a variety of angles. I'm more interested in whether or not your logic is consistent. Call it a brain exercise.

Ms. Ladd, I assume that your last comment was directed at me, though it may well have been directed at bubbat. Let's just say that my logic (probably not the correct description - let's say my moral stance is situation-dependent). Regarding parents with no record of irresponsible behavior, as long as fraud exists and we are unable to distinguish between those capable and incapable, then I am for subjecting everyone to the same onerous requirements, be it child care agencies or gun purchasing. As the article states, this is a pilot program and, apparently, participation has been mandated by the DHS with funds allocated as such. My guess is that participation is, therefore, voluntary on behalf of the child care agencies. But, the program appears to offer the potential to decrease fraud and it would be in the agencies' best interest to participate.

Jane Boykin, with Delta Licensed Providers, noted at a public hearing held yesterday at Mississippi Public Broadcasting auditorium in Jackson that many providers are African American and lack bank accounts. "That is totally discriminatory on its face and in practice," Boykin said of the requirements. I'm not sure what being black has anything to do with lacking a back account. Were I to place my child in such a facility, I would be concerned about the potential for fraud and abuse. Similarly with the requirement for a landline for communication purposes. Makes sense.