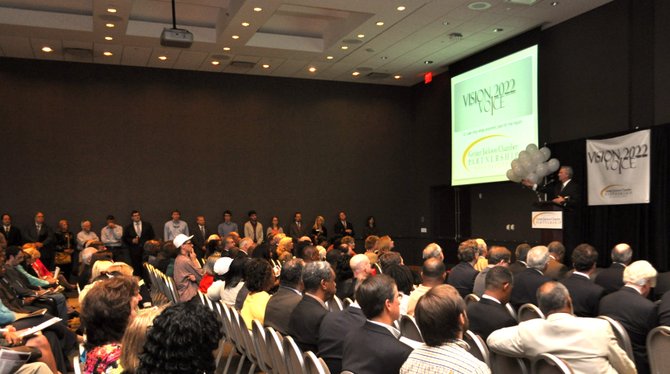 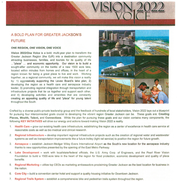 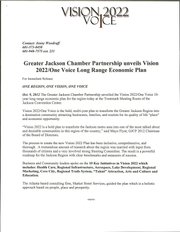 The Jackson metropolitan area now has a 10-year plan in the fields of education, health care, economic development, infrastructure, public transportation, arts and culture and the aerospace industry.

The Greater Jackson Chamber Partnership, along with the mayors of Jackson and Flowood, presented a glimpse at the Vision 2022/One Voice plan at the Jackson Convention Complex Tuesday in front of an audience of more than 200. The 97-page plan has hundreds of goals, GJCP President and CEO Duane O'Neill said.

"(The plan) really came about by us going outside of our community and taking a look at a number of other communities that have transformed themselves into a thriving economic center," O'Neill said at the presentation.

GJCP went to cities like Richmond, Va., Oklahoma City, Okla., and Nashville and Chattanooga, Tenn. O'Neill said the one thread that connected all of those cities was they all had a 10-year plan. In the past, Jackson has only had five-year plans. O'Neill said he learned from his travels that the city has bigger issues that leaders cannot tackle in such a short period of time. Therefore, a 10-year plan is vital to the metro's growth.

While the plan is a regional one for the Jackson metro, GJCP worked with the Mississippi Economic Council to assure that the plan fit with that group's Blueprint Mississippi, a long-term plan for the entire state.

The aggressive plan requires a lot of work, and GJCP is signing up volunteers for each of the 10 categories: health care, regional infrastructure, aerospace, lake development, regional marketing, core city, regional bike and pedestrian trails system, talent attraction and retention, arts and culture, and education.

"Many times, people are going to be a little hesitant about it, because they are going to say, 'Are you sure we can do that?'" O'Neill said. "There are too many times that we don't give ourselves the credit that we should take in this community."

When central Mississippians stop and think about all the positive things that others have done in the area, it brings a stronger optimism about what can be done here in the future, O'Neill said.

One of the biggest goals of Vision 2022/One Voice is a vast expansion of the area's health-care industry. A health-care corridor that could extend from the Jackson-Medgar Wiley Evers International Airport to the Hawkins Field Airport in Jackson is in the latter planning stages. More than 100 stakeholders are currently working on the plan that could make Jackson a national leader in the health-care industry.

The other major development in the plan is a 1,500-acre lake near downtown Jackson. Mayo Flynn, chairman of GJCP, said the one common theme among the revitalized cities they visited was water. To get Jackson in line with that theme, GJCP wants to divert the Pearl River to create the lake, which they believe will help the area with flood control, economic development and in creating better "quality of place" for residents.

The plan has taken several different forms, including a recently abandoned plan for two lakes in the area.

"Never, in the 30-plus years of this issue, have all of the key players come together to support a common plan, until today," Flynn said. "For the first time, the Levee Board, the (U.S. Army) Corps of Engineers, the Pearl River Vision Foundation and the leaders of both sides of the (Pearl) River support a common plan. That has never happened before, folks. It is time for us to get behind that plan and make it a reality, because when we do, we will totally transform this community."

GJCP seem to be in the earlier stages of planning the other aspects of Vision 2022/One Voice. In the aerospace portion of the plan, leaders hope to draw major players in the industry to Jackson, including manufacturing and training.

As for regional infrastructure, GJCP plans to make the entire metro more pedestrian and bike friendly, while expanding public transportation throughout the metro. A downtown trolley system is also in the plans for Jackson.

"The greater Jackson area must acknowledge that trends that are taking place in the core city significantly affect the competitive position of the broader Jackson region," Johnson said.