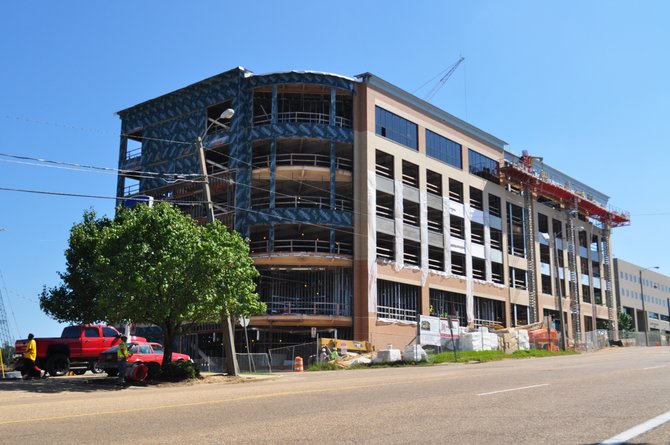 Anyone who has driven by Baptist Health Systems Hospital on North State Street recently has noticed the construction workers building the metal-and-brick structure just across the street.

BHS bought the land where the building is now under construction from the owners of Keifer's restaurant last year with plans for a healthcare-centered mixed-use development. Now much of the five-story, 180,000 square-foot building is complete, and BHS hopes to see the building, as well as an 800-spot parking garage, open on the land by mid-April 2013.

BHS began a long-term strategy prior to the 2008 economic collapse that included expanding further into the Belhaven neighborhood. After the recession hit, though, BHS scaled the plans down to focus on building more office space on the land formerly housed Keifer's.

"We needed physician office space to get more physicians down here. We were out of space for them to lease," BHS Communications Director Robby Channell told the Jackson Free Press. "This was just the first phase of our development efforts in a long-term plan."

For the project, BHS hired Milwaukee, Wis.-based Landmark Healthcare Facilities to finance, build and manage the facility, while BHS holds ownership of the land.

Building medical facilities is the only thing LHF does. President Anthony Lampasona said LHF builds three or four projects similar to the one on State Street every year throughout the country. The company recently finished projects in Florida and one in Lafayette, La.

The total investment for the building, parking garage, an addition to Baptist Hospital and 11 townhouses that will also be located on the land across from the hospital, is about $75 million. LHF invested about $8.8 million of its own money into the $35 million office building. The other $26 million came from a bank loan that LHF took out for construction.

Lampasona said that hospitals often find companies to build and own new projects like this one, because the hospitals money is better spent elsewhere.

"In their overall mission, owning brick-and-mortar buildings is not as important to them as developing more service lines to serve the community, how to better the patient experience, capital required to recruit more physicians to the area, improve core facilities within the hospital," Lampasona said. "All of that takes a tremendous amount of money."

BHS will provide the funding for the other pieces of the construction, including parking garage and a sky bridge connector that will provide pedestrians a safe walkway above State Street.

"I've crossed that street many, many times. Sometimes, it's not the safest street to cross. There's a lot of fast driving going on there," Lampasona said.

Another part of the project is a streetscape makeover. LHF and BHS will both invest money into creating more well-defined crosswalks and redesigned sidewalks at intersections that will make travel safer and easier on pedestrians.

Once LHF finishes construction on the building, it will lease out the space inside it. Several tenants have already signed on, including medical providers like Premier Medical Group (which will take up 45 percent of the building, or about 70,000 square feet), Jackson Eye Associates, Retina Associates, BHS's neurosciences services and home healthcare. There will also be retail space in the building, including an Einstein's Bagels, a full-service restaurant called The Manship, a yogurt shop and Trustmark Bank.

"Part of that retail component of the first floor was to really create some space for the Belhaven residents and neighborhood, some place for them to go to be able to get something to eat," Lampasona said.

When BHS purchased the land, Keifer's owner Rick Olson owned the land just across Poplar Boulevard, but he wanted help in building a new restaurant there. So as part of the land purchase, Olson paid money to BHS for them to give to LHF to construct the new restaurant.

Lampasona said LHF is used to only building medical facilities, so Keifer's got a structure far more stable than the average restaurant. He said the new Keifer's structure could realistically last up to 8,000 years.