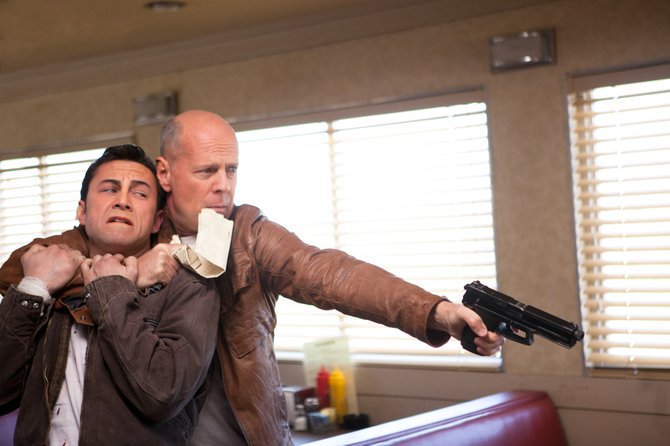 Joseph Gordon-Levitt and Bruce Willis are captivating as young and old versions of the same character in "Looper." Photo by Courtesy Endgame Entertainment

Every time-travel sci-fi flick is cursed (or blessed) with a unique creative metabolism. The realm of time gets gobbled up and digested into a mushy mass of past, present and future. “Looper,” written and directed by Rian Johnson (“Brick” and “The Brothers Bloom”), doesn’t attempt to explain how time travel works. Old Joe (Bruce Willis) tells Young Joe (Joseph Gordon-Levitt) that it would take a couple days to explain how a person can exist in the same time dimension as his 30 years older self.

Johnson ingeniously uses the vehicle of time travel as a predicate for the meeting of the young and old self. It’s called “closing the loop.” But I think of it as a philosophical interpretation of the circle of life, as so eloquently expressed by Elton John and Tim Rice: “It’s the circle of life, and it moves us all, through the despair and hope, through faith and love, till we find our place on the path unwinding in the Circle, the Circle of Life.”

Old Joe has been through the loops of life; Young Joe has barely started.

This film doesn’t aim for philosophical eloquence, although it is smart and thought-provoking. The loop gets closed when a looper (a specialized assassin using a large, inefficient bazooka-styled weapon) kills his older self, who has been sent back in time because the mysterious Rainmaker says so. The looper doesn’t know it’s his older self until after the kill, because the old self is trundled up and wears a potato sack over his head. The reward for closing the loop is a load of gold bricks carried on the back of the old self and recovered by the young self before the young self incinerates the old self.

If you are confused, that’s the point. Don’t ponder the logistics, or your head will hurt. Abe (Jeff Daniels), Young Joe’s boss, sums it up: “The time travel thing fries the brain like an egg.”

By suspending any discussion of how and why time travel works, Old and Young Joe can focus on the jigsaw puzzle that propels the story forward. “I’m gonna stop this guy,” says Old Joe to Young Joe. The “guy” Old Joe refers to is the Rainmaker, a faceless criminal who spreads and controls anarchy and chaos across continents in 2074. He’s a one-man show, and Old Joe seeks to kill the Rainmaker’s younger self.

Through skillful filmmaking, we learn that the Rainmaker’s henchmen in 2074 find Old Joe in China and send him back in time to be shot by his young self. Only Young Joe hesitates. Old Joe isn’t wearing the potato sack on his head. His hands aren’t cuffed. And Old Joe’s one mean and scarily resourceful fellow. He knocks his younger self down and escapes. Because Young Joe hasn’t closed the loop, Abe and his posse of half-cocked loopers go after both Joes.

Young Joe wants his life to return to normal, and the only way that can happen is for Young Joe to close the loop. Young Joe knows that Old Joe plans to kill three possible children who may be the Rainmaker, and he sets up shop at a remote farmhouse where a young mother named Sara (Emily Blunt) and her young son Cid (Pierce Gagnon) live.

This film, which opened the Toronto Film Festival, works because the personal story among Old and Young Joe and Sara takes on the weight and shape of the solution to a mystery. At times, this film pops and crackles with “Pulp Fiction”-like vitality. This could be because Bruce Willis shoots down a lot of bad guys in both movies, but I suspect it’s because Johnson places his finger on the dramatic fun of each scene. He also gives élan to scenes that were intentionally confusing so that the film jumps from each dramatic highlight without any lagging in between. Johnson charges right through the weak spots (i.e., the time travel) and pulls together a highly stylized and visually and emotionally engaging cinematic work. Gordon-Levitt’s chameleon-like appearance and performance are mesmerizing. “Looper” is one of the best films of the year.