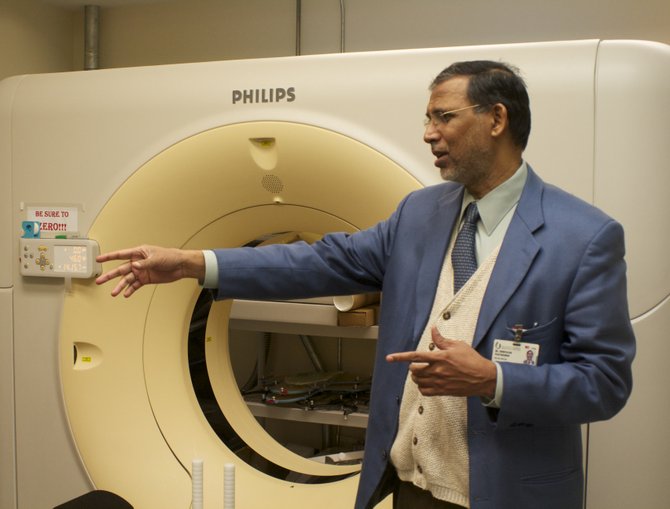 Statistics show Mississippi is suffering by not having a National Cancer Institute-designated treatment center, so the University of Mississippi Medical Center is working to change that within the next five years.

The 67 NCI-designated centers nationwide lead the way in developing new and more effective approaches to prevention, diagnosis and treatment of cancer. The closest designated centers to Jackson are St. Jude's Children's Research Hospital in Memphis, Tenn., and University of Alabama-Birmingham Comprehensive Cancer Center in Birmingham, Ala.

Dr. Srinivasan Vijayakumar (UMMC insiders call him Dr. Vijay) is the chairman of the university's Department of Radiation Oncology and the deputy director of the Cancer Institute. He completed his residency at the University of Chicago, which has an NCI-designated institute, The University of Chicago Comprehensive Cancer Center. Vijayakumar wants to see UMMC build such a center.

The need here is undeniable. While Mississippi ranks 20th in the nation in occurrences of cancer, with 477.1 per 100,000 people, it ranks third in cancer deaths with an average of 204.7 deaths per 100,000 over the last five years.

The state's statistics are not an anomaly. Of the six states with the highest cancer death rates--Kentucky, West Virginia, Mississippi, Louisiana, Tennessee and Arkansas--only Tennessee has a NCI-designated center. In contrast, the six states with the lowest cancer death rates--Utah, Hawaii, Arizona, Colorado, New Mexico and California--all have NCI-designated centers.

Those centers have access to funding for state-of-the-art equipment, and cancer patients in those states have access to doctors who have done hands-on research with that equipment. It takes years to get NCI designation. NCI has requirements the hospitals must reach for the research center and for the researchers. UMMC's biggest step, Vijayakumar said, is building a new cancer research center.

As part of UMMC's 15-year comprehensive plan, the university has begun work on a new entrance to its campus from Lakeland Drive and a new heart center. Once the entrance is complete, crews will begin building a new, state-of-the-art School of Medicine.

That building, the Cancer and Biomedical Research Center, which will be a part of a larger research park on the UMMC campus, is one of the two key elements to NCI designation, Vijayakumar said. The school has already begun securing the other key element.

"We have recruited eight Ph.D. research people who do cancer-related research," Vijayakumar said. "So now what we are trying to do is to bring in bench research findings to the clinic, so that the treatments are improved."

Bench research is done in a laboratory on non-human subjects. UMMC is the only facility in the state that can do such translational research at this time, turning findings from basic scientific study into practical applications in the field of cancer treatment and prevention.

Once UMMC builds and moves into the Cancer and Biomedical Research Center, it will apply for NCI designation, Vijayakumar said.

The NCI designation is "an entree  to greater federal funding; just as much,  it is recognition of scientific excellence  and of outstanding leadership," the NCI website states.

Once UMMC applies, it could receive one of two NCI designations: NCI-designated cancer center or NCI-designated comprehensive cancer center. To receive the comprehensive label, UMMC will have to demonstrate substantial findings that link laboratory, clinical and population-based research, as well as professional and public education and outreach capabilities, all of which make up a large part of UMMC's operations already because it is a public university with multiple locations.

UMMC already has a big head start on NCI designation with many elements available nowhere else in the state. It boasts five on-staff physicists, who can focus radiation treatment machines to pinpoint cancerous tissues while minimizing harm to surrounding tissue and organs, and the state's only HexzaPOD Evo table, which can adjust patients' position and angle to the millimeter during treatment so that the radiation machine attacks only the correct spot in the body. Vijayakumar believes UMMC is well on its way to NCI designation.