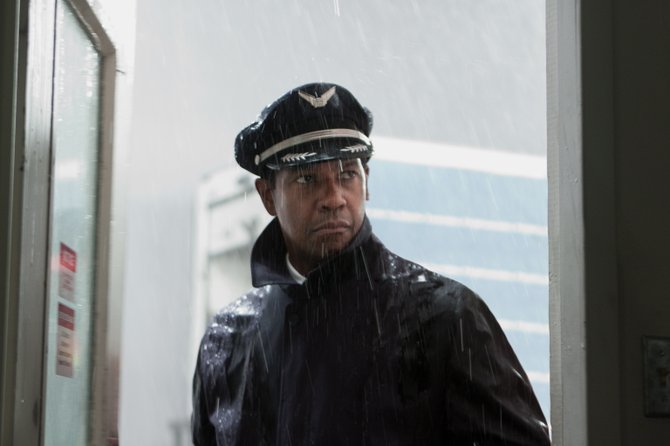 Leaving the theater where I saw “Flight,” I felt the way survivors of plane crashes must feel when they are transported from the site of carnage: exhausted and relieved. Directed by Robert Zemeckis, this film simmers on the fate of Captain Whip Whitaker (Denzel Washington), a commercial airline pilot who saves the lives of nearly all the passengers on what should have been a short and easy flight from Orlando to Atlanta. Bad weather, turbulence and equipment failure, however, lead Whitaker to crash land the plane in a field. Four passengers and two crew members die. One of the dead crew members is Whitaker’s girlfriend (Nadine Velazquez), with whom he had spent the night partying at the American Value Suites.

Is Whitaker to blame? It starts as a pesky thought ricocheting around Whitaker’s mind. He represses it: “No one could have landed the plane like I did,” he says.

Laid up in a hospital bed with a banged-up leg and half his head bandaged, Whitaker watches the news coverage through one blood-shot eye. He sees the cell-phone videos replayed for viewers that show Whitaker flipping the plane upside down to slow the gravitational pull and then flipping it right side up to glide the plane into a pasture where a small group of evangelists are holding a revival. The right wing clips a church steeple during the descent. The plane breaks up on landing. The fires are minimal because Whitaker dumped the fuel before the crash. Experts opine that the landing was nothing short of a miracle. The media hails Whitaker as a hero.

The unspoken question, a bit more tangible as the investigation develops, bobbles up again: Is Whitaker to blame?

Divorced and estranged from his ex-wife and son, Whitaker lives a care-free and worry-free bachelor’s life with escalating alcohol and drug abuse. But he’s a high-functioning alcoholic and cocaine addict; he’s solid under pressure and says all the right things for the black box.

Harling Mays (John Goodman), Whitaker’s drug dealer and only friend, pumps out the gloom from the hospital room. Pulling open the curtains to show the crowds of people lined up outside, he says, “You’re a rock star.”

The investigation by the National Transportation Safety Board reveals more than mechanical failure. The toxicology report indicates that Whitaker was legally intoxicated at the time of the crash (three times the legal limit) and was high on cocaine. The question is no longer a nagging thought. It’s on the table of possible causes. Is Whitaker to blame?

Charlie Anderson (Bruce Greenwood) from the pilots’ union hires a smart defense attorney named Hugh Lang (Don Cheadle) to handle Whitaker’s criminal negligence case. Whitaker can’t quite wrap his head around the fact that he could face life-imprisonment for his actions.

The plane crash is essentially the film’s prologue; it’s certainly the visual high point. The story is Whitaker’s personal nosedive into self-destruction. A recovering junkie (Kelly Reilly) tries to get Whitaker to address his addiction, but Whitaker is lost in a thick fog of denial. As internal and external pressures mount, Whitaker’s image of confidence evaporates.

This movie demonstrates what a film can give an audience that a book can’t: It’s the glory of the performers—performers like Washington and Cheadle whose faces have been written on by time and skill, performers with rich voices who tell stories in a blink of an eye.

Washington’s performance takes its own miraculous flight, soaring above everything else in the film. His noble face becomes a mask of doubt and pain. Every expression is an emotional time bomb. His intelligence and craft are subsumed in something raw, powerful and transformative. We mourn for Captain Whitaker because he is revealed to himself as less than he thought he was. He is the master of his fate. You won’t know whether to applaud or cry.