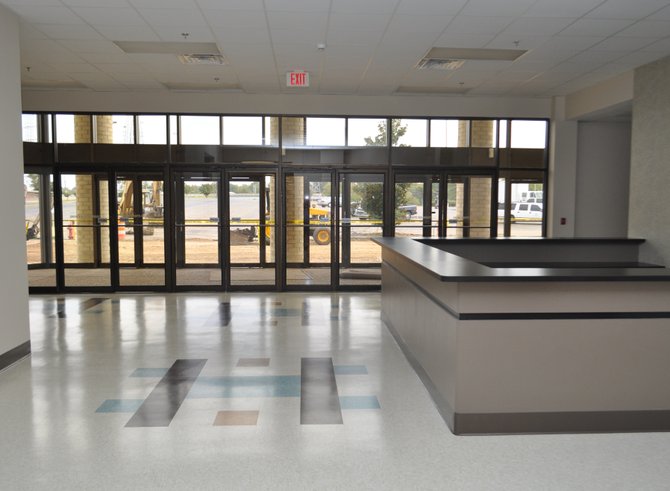 Retro Metro has completed renovations of the former Belk building at Metrocenter Mall. Six city departments have begun or completed the move into the building. Photo by Trip Burns.

Jackson Police Department Precinct 2 has completed its move from the old Atmos building on West Capitol Street into the former Belk department Store building at the mall. Building superintendent Bruce Weathersby told the Jackson Free Press Nov. 2 that the city's Parks and Recreation Department, which was formerly located in the Jackson Medical Mall, had also moved into the building.

"I've been in some of those places where they were before, and I understand what their appreciation is about. This is a much newer, cleaner and more modernly updated facility. They are gong to enjoy it," Weatherby told the Jackson Free Press.

The city hopes to revive Metrocenter from near total abandonment. In recent years, the mall has lost all of its anchor stores, including Belk, Dillard's and Sears. The city is moving nearly 300 employees to the building at the corner of U.S. Highway 80 and Robinson Road in  west Jackson.

The city is also moving the Department of Human and Cultural Services and the Water and Sewer Department from the Jackson Medical Mall, and the Public Education and Government TV studio from the Atmos building to Metrocenter.

The mayor said the Jackson Redevelopment Authority owns and leases the Atmos Building and it will decide what to do with vacant space there.

Johnson presented a copy of an audit the Jackson City Council requested to show how developer Retro Metro spent $50,000 of the city's funds for new electrical and telecommunications wiring at the former Belk building at a regular council meeting Oct. 30. A few council members had said they would not OK the move into the building until the audit was complete.

The city hired certified public accountant Sammy Asemota to perform the audit. After listening to Asemota's report, no council members raised any objections. Council President Tony Yarber said because the council did not have any more discussion, the mayor was free to move forward with the project.

The move will take a couple of weeks to complete, Johnson said.

Socrates Garrett, one of three managing partners in Retro Metro, said the building was completed and ready for the move Oct. 29, which was the completion date Retro Metro gave the council months ago.

Retro Metro originally scheduled the project for completion in the fall of 2011, but miscommunication between the city and the developers on the full price of (and who was paying for) wiring upgrades stalled the project for several months.

The project was challenging, Garrett said. He hopes its completion will help him and his partners get more development jobs in the city.

Garrett and his partners, LeRoy Walker and Howard Catchings, are African American. Garrett pointed out to the council that local minorities led the entire project, from Retro Metro to the general contractor to sub-contractors.

Johnson presented copies of the audit to the council, but Ward 5 Councilman Charles Tillman, who has been one of the most vocal advocates of the audit, insisted on hearing from Asemota.

Asemota said he talked to all three Retro Metro partners, reviewed their invoices and receipts for the rewiring, and walked through the building with an independent expert who understands the wiring process better than he does.

Tillman asked if Asemota talked to developer David Watkins, who left the project earlier this year to focus on the Farish Street entertainment district. Asemota said he did not talk to Watkins, but that he did review the receipts from Watkins' payments to the subcontractors for the project.

Asemota said he did not find any problems with how Retro Metro used  the $50,000.