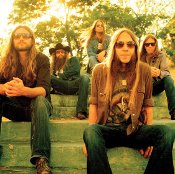 Blackberry Smoke will perform June 2 at Ole Tavern on George Street during the Summer Kickstart event.

Whether he is opening for Eric Church in front of 20,000 people or headlining a Friday night show at Hank's Texas Grille in McKinney, Texas, Blackberry Smoke frontman Charlie Starr is at home on the stage.

Playing its own blend of country and southern rock, the Atlanta-based band has played arenas, amphitheaters, honky-tonks and dive bars across America since forming in 2000.

Relentless touring is vital for a band that rocks too hard for most country radio stations and sings about trucks, fishing and boots too much for modern rock radio. Touring is how a band makes a living without major label promoters who buy TV ads and radio play for their clients.

Blackberry Smoke has earned TV spots with its touring. The DVD "Live at the Georgia Theatre," shot Aug. 5, 2011, has played on Palladia.

"We played (a concert) with (Lynyrd) Skynyrd up in Minnesota that DirecTV has aired numerous times as well," Starr said. "Those are so powerful. So many people come to us, in city (after) city, and are like, ‘Man, I had never heard of you until I saw this DirecTV show or the Palladia show."

Possibly the band's biggest breakthrough came when country-music star Eric Church signed them to his label, Southern Ground, in spring 2011. Starr said he and the band were ready to record a new album on the label right away, but Church had different plans.

Blackberry Smoke finally got into Echo Mountain recording studio in Asheville, N.C., last fall. The end result of those sessions and few others in Atlanta and Fayetteville, Ga., is their third studio album, "The Whippoorwill," that Blackberry Smoke, Clay Cook, Matt Mangano and Zac Brown produced.

Due to "all the logistics and in-and-outs and the things that I really don't give one damn about," Starr said, the album's release date is set for some time in autumn this year. Starr didn't like the idea of making their fans—who have been waiting three years for a new album—wait even longer. That's why "The Whippoorwill" is available exclusively at Blackberry Smoke shows until the "official" release.

The possibility of someone leaking the album onto Internet file-sharing or torrent sites doesn't really bother Starr. It's just another person wanting to listen to their music, he said. He's not encouraging people to do it, but there are worse possibilities.

"A guy came to a show in Kentucky that we played just a few weeks ago," Starr said. "He, apparently, bought a few copies of the new album, and he's got them for sale on eBay for $300. To me, that's more offensive than the alternative."

Blackberry Smoke's summer tour comes to Jackson June 2 when the band headlines Summer Kickstart 2012 at the Ole Tavern (416 George St., 601-960-2700). The music starts at 6 p.m., and the lineup also includes Death on Two Wheels, Jason Turner, Gunboat and That Scoundrel. Harley-Davidson will give away a free motorcycle, and Miller Lite will hand out free T-shirts and swag all day. The event also includes a crawfish boil. Gates open at noon. Tickets are $15 and available through Ticketmaster; you must be 18 or older to attend.