The Sound (Guys) of Music 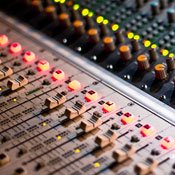 Sound engineers, or "the sound guys," are behind every great CD and concert.

While many of us attend concerts and festivals to hear great live music, it is common to forget that it's not only the band making great music, but it's the behind-the-scenes sound engineers (aka "the sound guys") that help create that music so dear to our hearts. And while it may be true that drummers and bassists don't get the love from the music community they so readily deserve, our sound guys often take back seat or get no recognition at all for all their hard work. They make sure bands sound good and can hear themselves; they get the levels right at live gigs or in the studio.

One of my most beloved sound guys is Chuck Bryan who runs sound at Hal & Mal's (200 S. Commerce St., 601-948-0888) and Duling Hall (622 Duling Ave., 601-362-8440). He has been in the music business for 35 years and started doing sound when he was in bands back in the day. "I was the only one hooking up everything," Bryan recalls. He also was the stage manager for the main stage at Jackson's Jubilee!JAM for 11 years. When he isn't doing an outstanding job running sound at Hal & Mal's and Duling Hall, Bryan works production for local concerts and the Mal's St. Paddy's Parade. Bryan says he enjoys working with all professional musicians.

Sound engineer Jon Clark, 36, has been in the music business for quite some time as well. He found out that there was a lot of engineering when it came to the sound when he was younger and playing in bands. After attending Middle Tennessee State University's production and tech program, Clark moved to Madison where he started Dreamtime Productions in 2004. Building from the ground up, he got much-appreciated help from Bob McCree, who helped Dorothy Moore and Peggy Scott get their start in the music industry. Clark has had the pleasure of working with seasoned musicians such as Sam Brady, Jamie Evans, Simon Williams and Daniel Guaqueta as well as sound engineers Chris Mara, a Nashville native, and Jacksonian Randy Everett.

Clark wants to work in more than just a musical environment; he wants to teach at a college level. He's learning more about the music industry and staying behind the scenes in his studio while working on his master's degree in mass communication from Jackson State University. He is also working with Jackson's Storage 24 on a new album, which should be released mid-summer.

If you ever go to Ole Tavern on George Street (416 George St., 601-960-2700) to hear the eclectic music this fun venue brings to town each week, then there's a pretty good chance you've seen sound engineer Jarrod Parker, 32, behind the controls. Parker has been playing, writing and singing music since he was 11. Besides being a member of the heavy metal band Hytchcock, he was also the singer/songwriter of Biloxi-based band, Fall As Well, which released two singles that made the Billboard charts. Fall As Well signed a deal with Universal and Imprint Records, an indie label that no longer exists. Parker then moved to Phoenix for six years and earned a degree in audio engineering at the Conservatory of Recording Arts and Sciences and a certification in Pro Tools recording software. He worked in various studios, has owned his own commercial recording studio and played in bands while there.

Parker's roots pulled him back to the Magnolia State August 2011, and he has been running sound for Ole Tavern for the past few months. He enjoys watching bands when they realize they sound good—that's when the musicians all seem to come alive, play better and have more fun. "I want to give back to the music scene, since it has done so much for me," Parker says.

I hope you all have a great week. Keep those listings coming in by noon on Mondays for the upcoming weekend, and please say hello if you see me out and about!