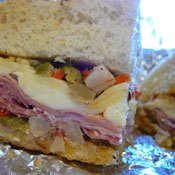 I'll only eat olives when they are part of a muffaletta sandwich.

I guess you could say I'm a picky eater. I still don't eat my vegetables, and to this day I have a weird thing about eating tomatoes that are bigger than diced-size pieces. I also firmly believe that the slightest taste of olives promptly ruins everything. Even the smell of the little fellas makes me queasy. No amount of dipping oil and pepper will make me eat olive loaf, and even if you pick the black variety off a pizza, I swear I can still taste them. You could stuff them with cheese made out of rainbows and pure sunshine, and I still would have a problem keeping one down.

My Pawpaw was from New Orleans and, with 11 grandchildren, was not too tolerant of picky eaters. One day he brought home a giant sandwich so big that my little hands could barely wrap around it. I remember biting into it and recognizing the familiar taste of olives, but this time, there was no tantrum, no sour face, not one convulsion of the throat.

I opened the sandwich to make sure that what I tasted was the unspeakable, and saw the green flecks smashed into the top of the bread. "Hmm," I thought as I studied the colorful layers inside this monstrosity. I liked it. Yes, the sandwich had olives, which were against everything my 8-year-old mind knew, but it also had pepperoni and cheese and other mysterious meats that all played a beautiful melody when put together.

I had just experienced my first muffaletta sandwich.

New Orleans prides itself for many things: Saints football, music, beignets, and a myriad of local recipes that are distinctly linked to the city such as gumbo, jambalaya, seafood and roast-beef po'boys, and, of course, the muffaletta sandwich.

Local history says that this giant sandwich was born in 1906 at Central Grocery, which is still open today, located at 923 Decatur St. in the French Quarter.

In the early 1900s, the Farmers Market was in the same area as Central Grocery. Salvatore Lupo, a Sicilian immigrant, owned it back then. The farmers would all go to Central Grocery for their lunch break and order traditional Italian plates of meats and cheese with bread, all eaten separately, in the traditional manner.

Salvatore thought that putting it all in one sandwich would make for easier eating; thus, the muffaletta sandwich was born.

The sandwich is traditionally made on thick, seeded Sicilian sesame bread and layered with olive salad (available in jars at McDade's), Emmentaler (similar to Swiss cheese) and provolone piled high on top of ham, salami, sometimes Capicola (a cured Italian cold cut), and pepperoni.

Pronounced "Muff-a-lot-uh" by some and "Moo-foo-a-leta" by others, this sandwich is sold in quarters and halves, as well as whole. Three times the normal size of a sandwich, a whole muffaletta can usually feed two or three people and is served at room temperature.

This delightful New Orleans tradition will always be a part of its history and will forever be known to me as the only way you will ever get me to eat an olive willingly.