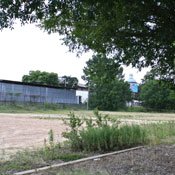 New York-based developer Full Spectrum South is working on plans to purchase the property for the first phase of the Old Capitol Green project from the state by the end of June.

The development company, headed by Jackson native Carlton Brown, plans to build an $83.7-million mixed-used development, 1822 Square, on the property. It will include Terre Verte, a 169,500-square-foot building that will include 129 residential units and more than 20,000 square feet of retail space; The Legacy, a 128,000-square-foot office building that will include another 37,350 square feet of retail space; and a 480-space, automated parking garage.

Full Spectrum has been leasing the 2.74-acre block from the state, which owns the land that was once part of the state Capitol property, situated between Tombigbee and Pascagoula streets to the north and south, and bordered by Commerce Street to the west and Jefferson Street on the east. The company plans to purchase the property next month and begin construction in August.

Malcolm Shepherd, development director of Full Spectrum South, said he has already received more letters of interest in renting retail space than the development will hold. Full Spectrum will not make any official deals with retailers until they break ground on construction, though, Shepherd said.

Full Spectrum South designed the development to maximize sustainability and energy efficiency, and 1822 Square is tailored to the environmentally conscious city dweller, Brown said at a meeting in March.

The plans include an outdoor garden on the second floor of the residential building above the retail space, under-street cisterns, a robot-operated parking garage with a black-water/rainwater cooling system, permeable paving and a pedestrian-friendly atmosphere.

"It is not an easy (application) to fill out. It's kind of complicated because they ask you questions that you have to calculate for them," Shepherd said earlier this month.

Shepherd said Monday that he finished the application and submitted it to Michael Davis, deputy director of the Jackson office of Economic Development, Friday, May 18.

The improvements include extending Court Street, which currently ends at Commerce Street, through Entergy-owned property to Jefferson Street on the other side. Shepherd said Entergy has already approved the extension through their property.

If they approve the tax increment financing, the city and county will designate a percentage of 1822 Square's ad valorem property tax and sales taxes generated by the retailers to repay the city and county for making necessary infrastructure improvements.

The funds for the buildings' construction are already in hand, Shepherd said, so once the city and county approve the TIF financing and Full Spectrum purchases the property, construction will quickly commence.

Farish Street in 2012?
After decades of talk and proposed development, Farish Street may finally become the entertainment hotspot Jacksonians have hoped for in 2012.

Watkins Development is working to finalize $11 million in historic tax credits that it will offer as collateral for a $10.2 million bond issue from the city. Goree said they hope to close on the tax credits by mid-July.

The $10.2 million issue will come in two parts, with Watkins focusing the first on opening the first two clubs and the second portion going towards completing the first block of the project, from Amite Street to Griffith Street.

Once the tax credits are finalized and the bond issue comes in the from the city, Goree said it will take approximately 90 days to get the two clubs open.

Iron Horse Grill to Live Again
The Iron Horse Grill, a once-popular restaurant that closed in 1999 after two fires left the building in ruins, may soon return to Jackson with a couple of additions sure to attract blues fans.

The city is currently working on a contribution agreement with developer Capital Hotel Associates, headed by Joseph Simpson, for urban-renewal bonds to help fund the project. Simpson said historic and new market tax credits are also in the works for additional financing and once the credits and bonds are finalized, Capital Hotel Associates will have all the funding it needs for the project.

Describing a best-case scenario, the Iron Horse Grill and Mississippi Music Experience will open during the first quarter of 2013, Simpson said.

CHA to Purchase Land for Hotel
Capital Hotel Associates has worked out an agreement and signed a contract to purchase land once occupied by Mississippi Valley Title at 315 Tombigbee Street from Hinds County, where the developer plans to build a luxury Westin Hotel. The new hotel will face Congress Street.

The 205-room, nine-story hotel will cost an estimated $55 million to construct. Joseph Simpson of Capital Hotel Associates said CHA is still working on getting financing for the hotel. The developer has already signed an agreement with Westin Hotels and Resorts.

Once financing is secured, Simpson said architects will need at least six months to design the hotel, and he estimates construction will take 15 to 18 months to complete. Capital Hotel and Associates is hoping to get financing secured and architectural work underway on the hotel by the end of 2012.